Girls' basketball comes up clutch to take down Wildcats 48-46

On Friday night in the first round of the playoffs, the stakes and intensity were high for the Blazers. Their convincing win over Walter Johnson earlier in the season had been long forgotten. Blair, having come off an emotional loss earlier in the week, was determined to make sure they wouldn't lose at home again.

Sure enough, their gritty play displayed their determination as the Blazers battled their way through a physical game to come away with a narrow 48-46 win. Senior captains Camille Estrin and Alexis Moses combined to score 26 points, playing huge roles on both ends of the floor. While junior guard Faith Sharp's clutch free throws sealed the win for the Blazers in the closing seconds of the game.

It looked like the second quarter was going to be more of the same after the Blazers killed several scoring opportunities with clumsy turnovers. However, Blair's 19-10 deficit ended up being the biggest one of the game.
Moses started the run with a powerful drive to the basket for a layup, and Estrin stripped the ball from the Walter Johnson guard on the ensuing possession for a breakaway layup. Only a few moments later, Estrin sank yet another post shot after being fouled. After draining the free throw, the score was suddenly 21-17 and the momentum was heavily in Blair's favor. 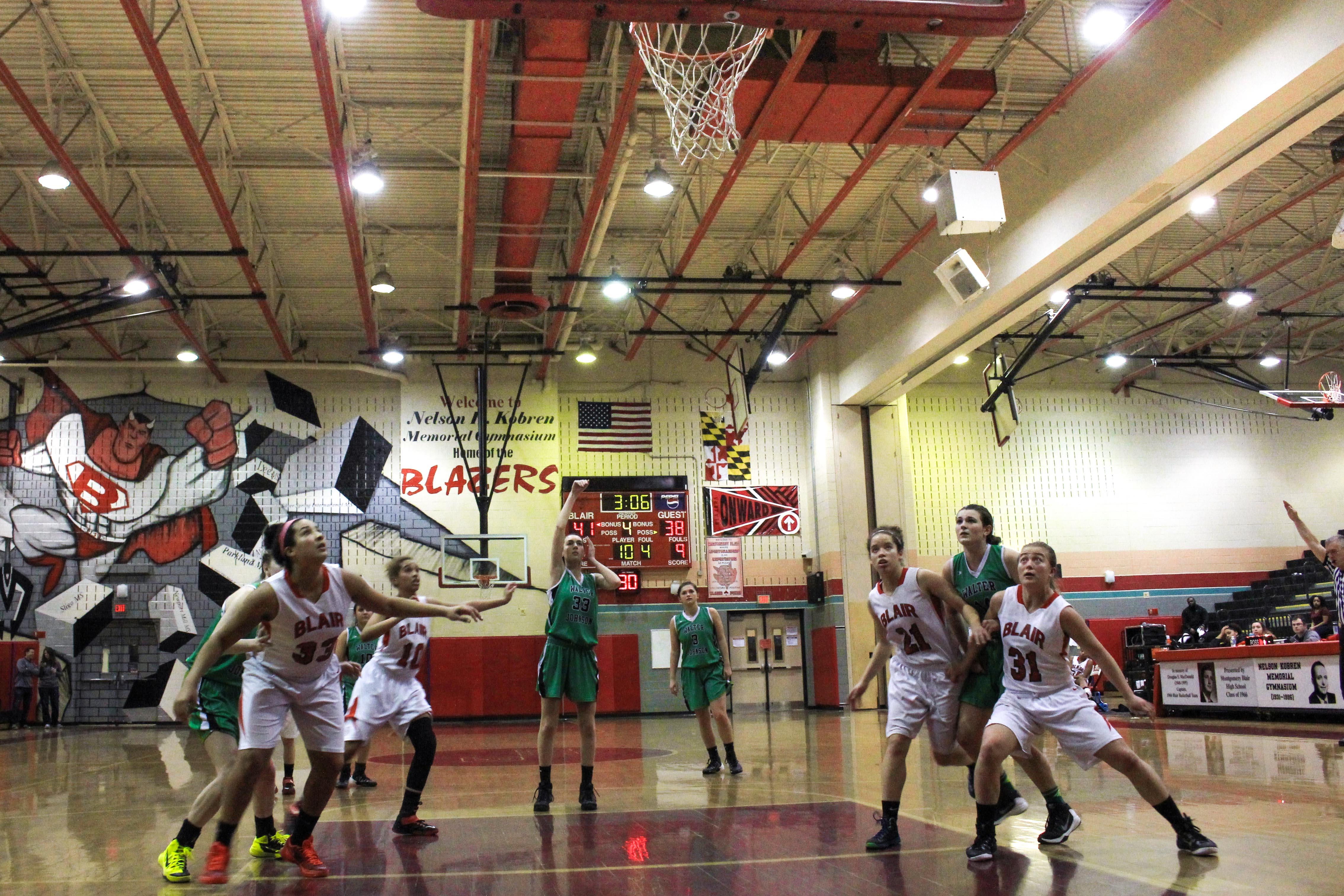 Photo: The Blazers prepare to box out for the free throw.

Photo: The Blazers prepare to box out for the free throw.  Photo courtesy of Donald De Alwis.

Moses' aggressive drives to the basket and lockdown defense continually gave the Blazers energy throughout the night. While Estrin's quick feet repeatedly allowed her to scoot around defenders for easy layups.
Sophomore forward L'Shana Cobey capped off the rally after taking advantage of a second chance opportunity off her offensive rebound to bring the game to a tie at 21. The Wildcats were able to head into the half with a 25-21 lead, but it didn't discourage the Blazers.

Blair came out hot in the second half. Junior Lauren Frost found sophomore Nora Olagbaju down low for an easy bucket. Then Estrin made an impressive layup after making contact with the Walter Johnson center.
Olagbaju's presence down low was huge for Blair throughout the course of the entire night. Her offensive rebounds gave Blair several second chance opportunities and keep possessions alive. Despite getting into foul trouble early, Olagbaju was able to settle down and prevent herself from fouling out. "I told myself to just keep moving my feet. I couldn't give them the satisfaction of winning on free throws," Olagbaju said.

After getting a defensive stop, Estrin ran down the floor and swished a three pointer to but Blair up 28-27. As the crowd erupted in pandemonium, Estrin waved her hands up and down as she ran back down the court. Not surprisingly, there was no looking back for the Blazers from this point. Blair's full court press caused numerous turnovers throughout the quarter, and left them with a 39-33 lead heading into the fourth.

Moses had a simple explanation for the huge surge, "I think it was just realizing that we were losing, and that we most definitely did not want to lose the game in the first round. I know I just snapped into it and told myself I was not going to lose this game."

But the Wildcats weren't going away without a battle. The lead vanished quickly. After stopping the Blazers on repeat possessions and forcing a turnover, the Wildcats suddenly had the game brought back to 39-37.

Moses got the Blazers moving offensively after nailing a jumper from the elbow. Olagbaju's impressive post moves earned her an easy two points to the bring the score to 44-40 in Blair's favor. On the other end, Blair committed a regrettable foul on the Walter Johnson guard. After she made both free throws, Estrin answered right back by driving the entire length of the floor and making yet another layup. With a 46-42 lead, the Blazers were unable to stop the Wildcats, bringing the game to two points with only 30 seconds left in the game. As Blair brought the ball down court, Faith Sharp was fouled and sent to the line. With a chance to put the game away, Sharp came up clutch and drained both to give Blair a decisive four point lead. Walter Johnson made a layup as time expired, but it didn't matter because Blair had the 48-46 edge.

With the crowd up anxiously on their toes, everyone in the gym could finally relax and rejoice in the win. Despite the nerve racking finish, the Blazers battled and earned themselves the playoff win.

Moving forward, the Blazers will travel to take on Whitman in the second round of the playoffs. Despite being the underdogs, Olagbaju is confident the Blazers can beat them. "I think we just need to keep this same intensity going into Whitman. They're going to be tough to beat but if we can show the same strength and tenacity we brought tonight we can hopefully come away with a win," Olagbaju said.

In order for the Blazers to win at Whitman, Estrin and Moses are going to need to keep scoring at high rates. There was some cause for concern on Friday night with Blair's sloppy turnovers, but Moses isn't too worried about them. "We just need to calm down," Moses said.

Editors Note:
Camille Estrin is the Sports Editor for Silver Chips Print
The Blazers will play Whitman in the next round of the playoffs at Whitman on Tuesday at 6:15