Estrin's hot hand not enough to keep up with Bulldogs offense

The girls' basketball team (11-11) suffered an emotional 56-40 loss to the Churchill Bulldogs on Monday night. While they were unable to pull out a win in front of a rousing crowd on their senior night, the Blazers battled back from an early deficit and kept the game close until the closing minutes. Senior guard Camille Estrin scored 19 points, including a couple deep threes to lead the way offensively for the Blazers.

Blair faced immediate pressure right from the tip as Churchill launched an forceful full-court press that caused chaos for the Blazers through the entirety of the first half. The strong defense caused an early shot clock violation on Blair's end. Sophomore forward Nora Olagbaju dominated the glass, and came down with several offensive rebounds. However, was unable to capitalize on some second chance put-backs.

The crowd quickly fell silent when the Bulldogs busted open to a shocking 7-2 lead. Just when the momentum was strengthening for Churchill, Estrin reignited the Blair offense when she stripped the ball from the point guard and made an easy layup on the other end of the floor. But the Bulldogs' full court press continued to trap and force turnovers for the Blazers and left them with a 15-4 deficit at the end of the first quarter. 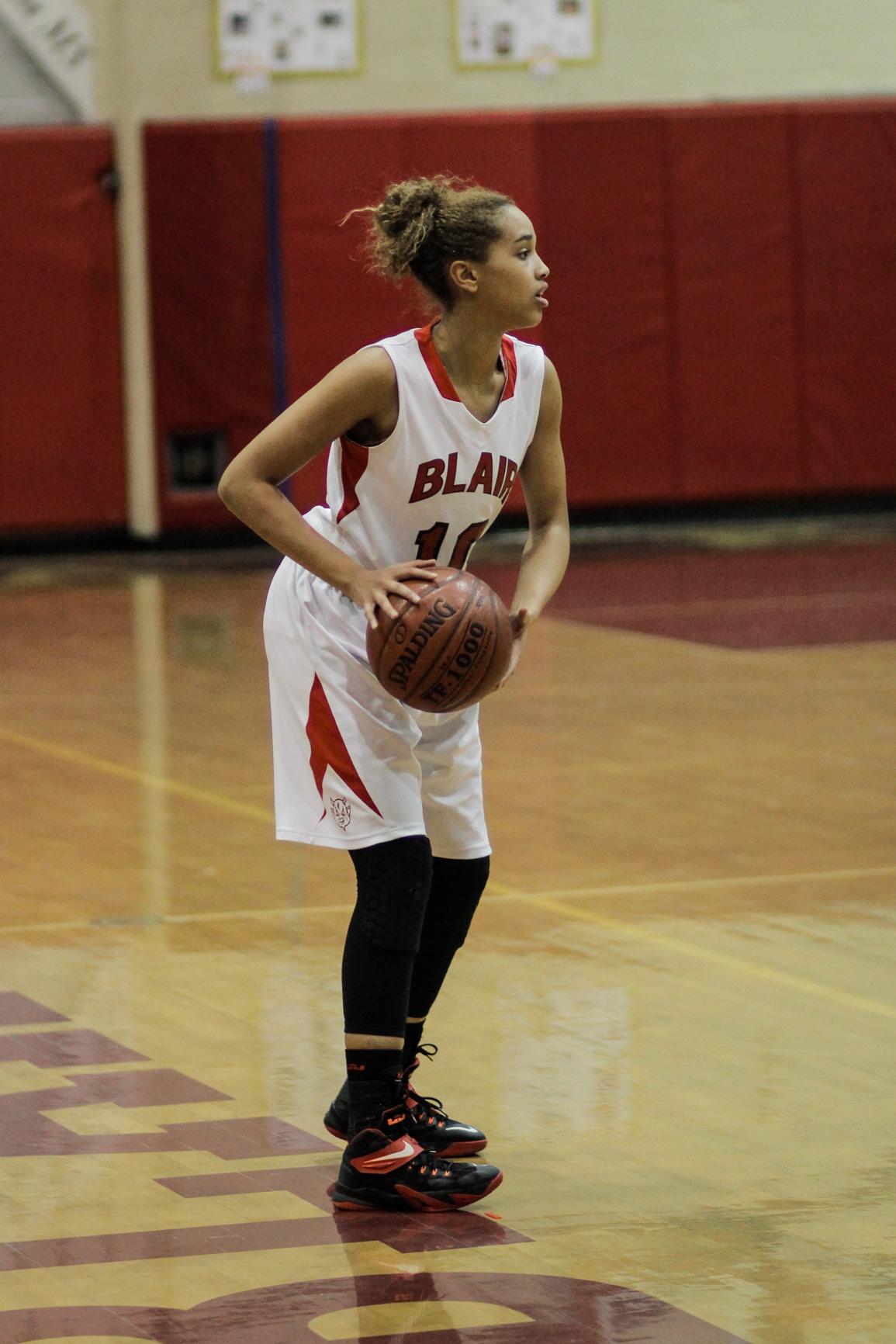 Photo: Senior forward Alexis Moses looks to dish the ball to a teammate.

Photo: Senior forward Alexis Moses looks to dish the ball to a teammate.

The second quarter was much of the same for the Blazers. Turnovers as a result of the press resulted in easy open layups for Churchill. The Bulldogs' offense was overpowering for the entirety of the game. They took advantage of a slight size advantage and drove to the basket repeatedly.

"We realized at halftime that the press wasn't actually that strong. They were just trapping in the corner. And if we just took our time and passed the ball up ahead it was fairly easy to break,” Estrin said.

While the Bulldogs had a commanding 22-8 lead at the half, the Blazers offense ignited in the second half. Estrin ignited the rally with an and-one to start the third quarter. Blair then broke down Churchill's press almost immediately. After getting several stops in a row defensively and converting on the other end, junior forward Lauren Frost grabbed an offensive rebound and finished with a strong drive to the hoop. On the ensuing possession after another defensive stop, Estrin nailed a deep three pointer off the backboard to bring the deficit within seven points.

Once Blair was able to bring themselves back and to a three possession game, the Bulldogs offense found its rhythm again, yet the Blazers matched the intensity. Churchill's guard made a aweing hook shot, but senior forward and captain Alexis Moses responded on the other end by running the floor and driving along the baseline for an open layup. Moses helped pace the offense with six points in the game.

Heading into the fourth quarter down 34-26, the Blazers were only able to hang on for a few minutes before the Bulldogs put it out of reach. Moses had another strong drive to the basket, and Olagbaju continued to dominate the post. However, every step that the Blazers took, the Bulldogs answered on the other end. 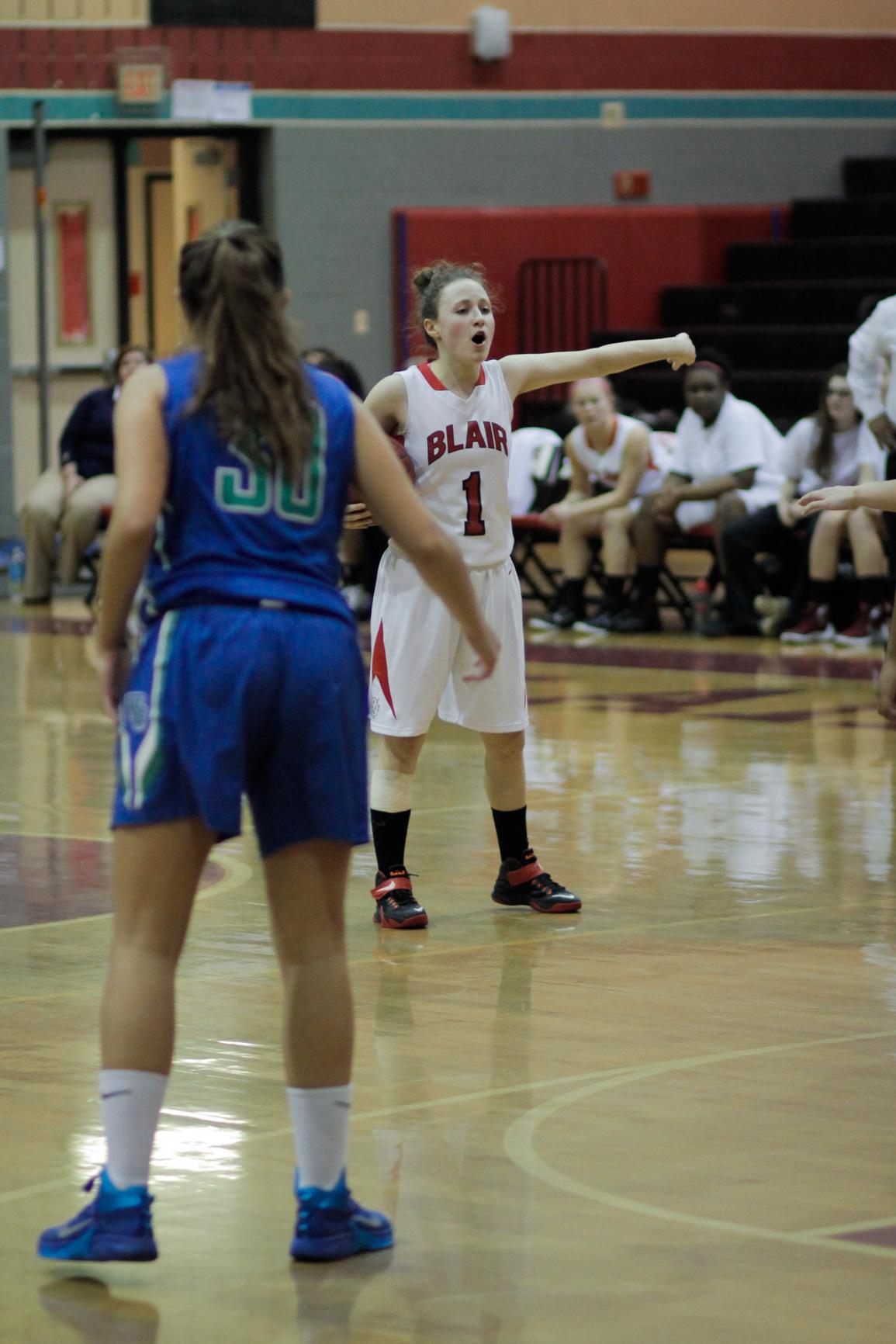 While Churchill inevitably came away with the 56-40 win, the Blazer players remained as positive as they good. "I was really pumped. It was my last regular season game ever in this gym. It was a very emotional game for me. I knew we had to come out with a lot of energy, and that's not exactly what we did. But I think all of the fans created the atmosphere that we wanted.”

The Blazers will take on Walter Johnson in their first round of the playoffs on Friday night. The Wildcats, whom Blair beat in December, will still provide a challenge. With defense being the primary concern for the Blazers moving forward, their offensive weapons in Estrin, Moses, and Frost will all help combat it.

"We're getting to be a much stronger team all around. Our team unity has grown so much over the course of the season, our chemistry has come together. We've been waiting for it all season and now it's finally here for the playoffs,” Estrin said.

The Blazers take on Walter Johnson on Friday night at 7:30 at Blair in the first round of the playoffs.