Blazers get off to slow start and can't come back

The Montgomery Blair varsity girls' basketball team lost 55-28 against the tall and physical Paint Branch Panthers. After getting off to a poor start, the Blazers were not able to come back against the Panthers' overpowering style of play.

The Panthers scored immediately after winning the tip, setting the tone for the rest of the game. A series of poor passes and missed shots by Blair's starters allowed the Panthers to get fast breaks in which they were able to put in plenty of lay-ups. Coach Carlos Smith attributed Blair's slow first quarter to a lack of confidence going into the game. "I think in the beginning we were a little intimidated just by the name of playing Paint Branch in basketball,” said Smith. Nevertheless, junior Faith Sharp was able to snap Paint Branch's early 13 – 0 lead with a long range two which was followed by a three by junior Allison MacKenzie.

In the second quarter Blair was able to create more offensive chances, but Paint Branch was able to match every basket the Blazers put in. Fouls also plagued the Blazers, and the Panthers sank an impressive amount of free throws scoring approximately half of their free throws. Senior Camille Estrin got momentum going when she took advantage of a poor Paint Branch pass and scored a layup on the breakaway. Afterward, Sharp delivered a nice pass to Estrin on a counter to give Blair another basket. The last three minutes of the second quarter remained scoreless until the game went into half time with the Panthers up by 20. 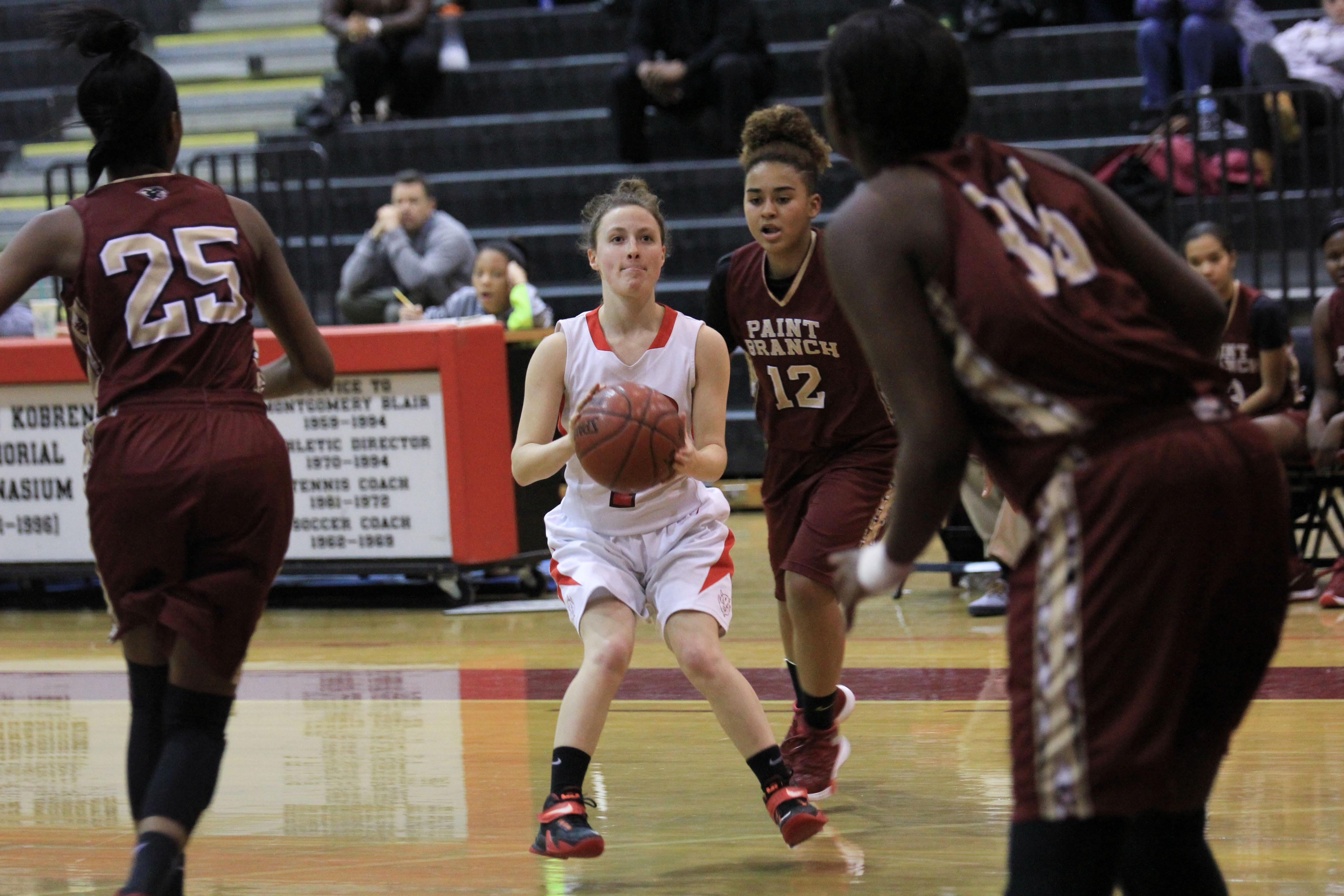 Photo: Senior captain Camille Estrin pulls up for a shot.

During the rest of the game Blair was once again weighed down with fouls and was not able to stop Paint Branch's physical drives to the basket. Estrin and Mackenzie dominated possession outside the arc, but the girls were not able to penetrate through to the paint. Paint Branch's large forwards dominated under the basket, boxing out Blair and getting the majority of the rebounds.

Sophomore forward Aissatou Bokoum believed that rebounding was Blair's biggest problem. "They were obviously tall and had a height advantage, but we still need to get a lot more rebounds than we did.”

However the home crowd was brought back to life at the end of the fourth when Bokoum dove out of bounds to swing the ball back to Estrin for a three. Bokoum was also able to nab a reverse layup on a well-placed pass from the point guard. Smith thought that Blair needed more of that type of hustling. "A couple of girls played hard, but as a team we didn't execute, we didn't hustle, and we didn't box out,” Smith explained.

The game ended with the Blazers having one of their poorer performances of the season, but it was against an accomplished Panthers team. Coach Smith still believes there are some valuable lessons to take from the game. "We know that it doesn't take talent to hustle and next time we will have to hustle more,” Smith said.