Reeling from a 51-23 loss to Magruder on Monday night, the varsity girls' basketball team returned home to play the Churchill Bulldogs in what head coach James Mogge called the team's "best game in a long time." The Blazers (1-10) stepped up to play together as a unit on offense and defense, adding the teamwork ingredient that has been missing from their play in previous games, but lost to Churchill 57-42. 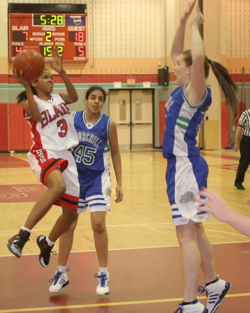 Photo: Junior Kalisha Holmes goes for the basket, paying no mind to the Churchill defenders.

Photo: Junior Kalisha Holmes goes for the basket, paying no mind to the Churchill defenders.

The Bulldogs opened the game with a 7-0 run before Blair responded. Senior Helen Denbow floated a pass across the floor to senior Kathy Jee, who swished a three pointer to put the Blazers on the board. Blair moved the ball effectively on offense early in the game, but costly turnovers and poor rebounding allowed Churchill easy opportunities to score. The Bulldogs tacked on nine more points in the quarter, extending their lead to 16-3. With less than a minute on the clock, junior center Regat Buluze found Denbow open at the foul line for a buzzer beater that brought the score to 16-5.

The Blazers entered the second quarter playing solid defense, challenging Churchill's guards on the arc to frustrate the Bulldogs and prevent open shots. On the other end of the court, the Blazers continued to run a controlled offensive set. Junior center Sara Ramsay powered up a lay-up to start the scoring. Whitman responded with two quick baskets before sophomore point guard Jenny Williams crossed over a Bulldog defender to muscle through the lane for two. With the score at 20-9, the Bulldogs entered an 11-point run that was interrupted only by a foul shot from Ramsay. Junior Kalisha Holmes added a basket at the end of the quarter, bringing the halftime score to 31-12.

Down 52-23, Blair exploded in the fourth quarter, outscoring the Bulldogs 19-5. Williams began the onslaught with a lead pass to Ramsay in the lane, who netted a lay-up. A few plays later, Jee connected with Ramsay on a give-and-go play near the baseline and connected on her third three-pointer of the night. On Blair's next possession, junior Molly Martinez snagged a defensive rebound and slung it down the floor to junior guard Christina Mullen for a lay-up and one point from the foul line, a three-point play that brought the score to 53-31 with Churchill still on top. 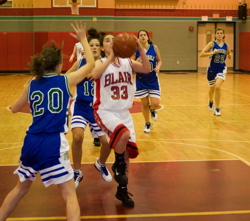 The Blazers continued their domination throughout the fourth quarter, playing as a team to set up open shots and capitalize on nearly every offensive possession. Williams rolled into the lane off a pick from Ramsay and nailed an open jump shot. On the next play, Denbow fed Ramsay on the block and Ramsay stepped around her defender for two more. With the score at 57-36, Williams received an open pass after a backdoor cut and spun around two defenders for a lay-up. Holmes and Williams added two points each in the last two minutes to bring the game score to 57-42.

As the final buzzer sounded, the Blazers were unfazed by the 15-point difference in the score. After a stretch of ugly losses, the Blazers showed real "progress" as they came together to "play like a team," according to Mogge. "I'm so proud of the way they played tonight," said Mogge. "Everyone played and made a positive contribution." Mogge also noted improved performances from several players, including Williams, who "stepped up defensively and offensively" to emerge as a leader on the court. Mogge also commended Ramsay's resilience and power in the post. Ramsay dislocated her knee in the first quarter of play but popped it back into place and returned to the game after a few minutes.

Despite the progress, Mogge cited several areas in need of improvement in the team's upcoming games, notably boxing out and rebounding. The Blazers face Walter Johnson and Richard Montgomery in the next two weeks before entering the second half of their schedule, in which they see teams from the first half of the season for division rematches.

The girls' varsity basketball team plays its next home game on Jan. 19 against Richard Montgomery at 7 p.m.