Blazers unable to come back from early setbacks

In what became a physical and tough-matched game, The Blazers (13-7) struggled to match the Vikings (20-0) in offensive consistency and were unable to secure a win, resulting in a final score of 67-35.

From the first whistle the Blazers knew they were in for a tough game. Blair's defense had to adjust quickly after Whitman's offense scored two consecutive three pointers and established a significant gap in the score. Though Blazer defense did eventually adapt to the physicality and size of the Vikings, defensive coverage were a game-long struggle, according to head coach Erin Conley.

"Match-ups were really tough," she said. "Whitman has a really big, strong lineup and trying to figure out what kind of defensive match-ups to work in was definitely tough." Offensively, the Blazers appeared timid and nervous, and by the end of the first quarter they were trailing by a hefty sixteen points. 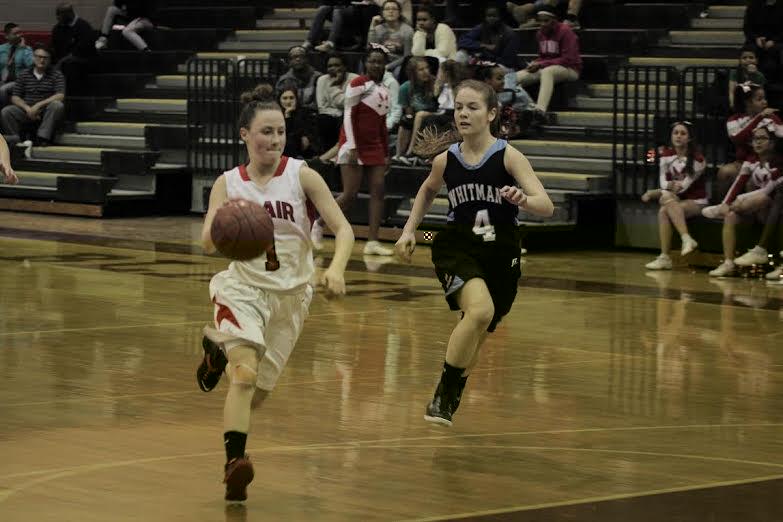 Though the intensity was definitely there for the Blazers, they sometimes became their own worst enemy by giving up several foul calls that set them further behind. Despite a more aggressive offense in the second quarter, The Blazers were bogged down by nerves and stress, and were still down by 26 points at the half.

The third and fourth quarters showed a marked improvement in offensive prowess and intensity. Conley thought that the team seemed to have relaxed a bit more as the game progressed. "By the third quarter we came around and we let some of the pressure go. Players started playing very physically and looking for more shots," she said.

Unfortunately, Whitman offense seemed to have picked up as well, and Blair defense struggled more in the third and fourth quarters to contain them and prevent shots. Fouling also picked up a lot for both teams, as they became fiercer in their play. Blair gave up a lot of points because of foul calls.

Though they were playing with immense intensity by the end of the game, The Blazers were unable to recover from the significant gap in the score. Junior guard Alexis Moses thought they played with a lot of effort, but just had trouble keeping their play consistent. "We tried our hardest and put in a lot of effort," she said. "But consistency was a struggle."

Blair will play its next home game on Monday, February 23 at 7 pm against the Wooton Patriots