BLAZER STADIUM, OCT. 15— The Blair girls' varsity soccer team (6-6) triumphed over the Springbrook Blue Devils (0-10) in an 8-0 resounding win. The game ended 12 minutes early after a Springbrook player hit her head and had to be carried off in a stretcher. 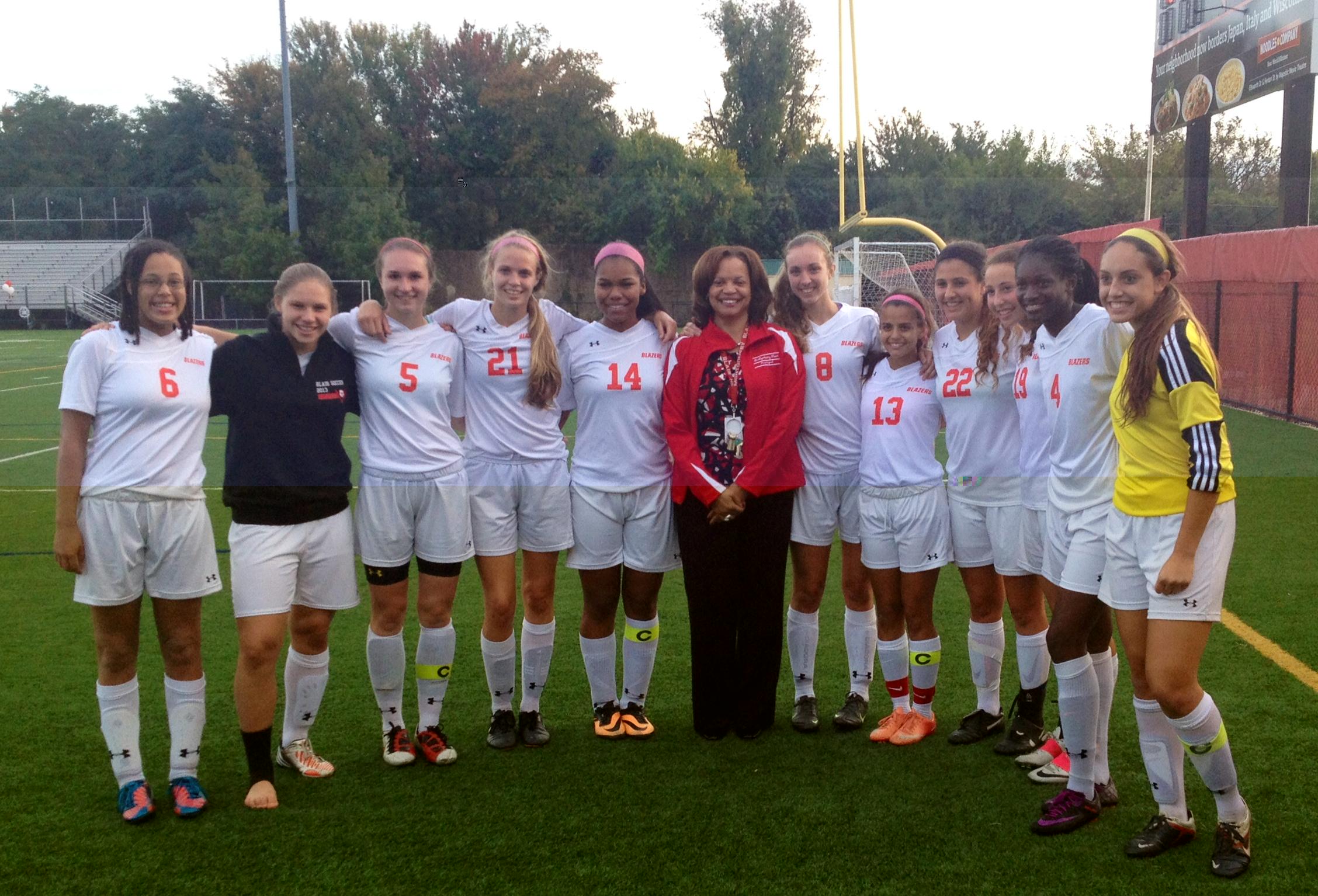 Two minutes after that, sophomore Kelly Mayo was fouled in the Springbrook penalty area, and was awarded a penalty kick. Senior captain goalie Sadie Isakower sprinted up the field to take the shot, which the Springbrook goalie blocked. Blair continued to dominate the game, with senior Hallie Richie and junior Taylor Bosse almost scoring. Seven minutes before the end of the first half, senior Shannon Healy scored with a nifty shot just past the goalie for a halftime score of 3-0.

Two minutes into the second half, DeMouy scored off a Springbrook fumbled block. DeMouy scored again nine minutes later, shooting right past the goalie. Less than a minute after that, Pietanza scored again, and six minutes later, junior Elyse Salpekar scored. Mayo was the next to score, putting the ball into the back of the net off a breakaway. Then, 12 minutes before the end of the game, a collision between players resulted in what could be a concussion to a Springbrook player. An ambulance was called for the girl, who was carried off the field in a stretcher, and the game was terminated due to the injury and Blair's inevitable win.

Since the game was the Lady Blazers' senior night, the seniors got red roses and a celebratory dinner in the SAC after the game. During halftime, Coach Robert Gibb's tributes to the seniors were read over the loudspeaker, and the seniors took photos with Principal Renay Johnson, who attended the game.

The Lady Blazers were very pleased with their performance. "We had a lot of shots on goal, we were communicating well and we played solid defense," Villa said. The offense was also especially proud. "We had a lot more attack than usual," DeMouy said. Gibb also noted that it was a good way to finish senior night. "Because it's senior night, we do things differently—we like to get all the seniors out and let them play together. Today we were able to have a good time, get eight goals…seven of them were scored by seniors, so that was kinda fun. It makes a nice memory," Gibb said.

As always, however, the Blazers still have room to improve—especially as they face their final division rival, Blake. "We want a win," DeMouy said. "We've got to keep working towards playoffs." Gibb is already theorizing about the outcome. " We need to move the ball better and score early—I don't think they can play with us once we're running and gunning," Gibb said.

Still, senior night is a night to celebrate the Blazers' hard work. "It's a good way to thank our students for being good athletic role models. It's not easy being an athlete. I thank the seniors for their commitment to Blair," Johnson said. For the captains, it's an important night. "It's nice to be appreciated for everything we've done," Villa said. "It's our one night to get more recognition than we usually do," DeMouy added. The night is bittersweet. "It's a little bit of closure," DeMouy said.

However, the team's work is not over. "We're thinking back on the good times, the memories, the laughs, the good games…but we still have two regular season games, so it's not like this is farewell," Gibb said.