BLAZER STADIUM, SEPT. 23— Blair varsity girls' soccer (2-4) lost to the Whitman Vikings (3-0-1) by a score of 3-0. Whitman scored two penalty kicks and also a late breakaway goal. Though the Vikings largely dominated the game, the Blazers put up a good fight with solid defense and many offensive chances. 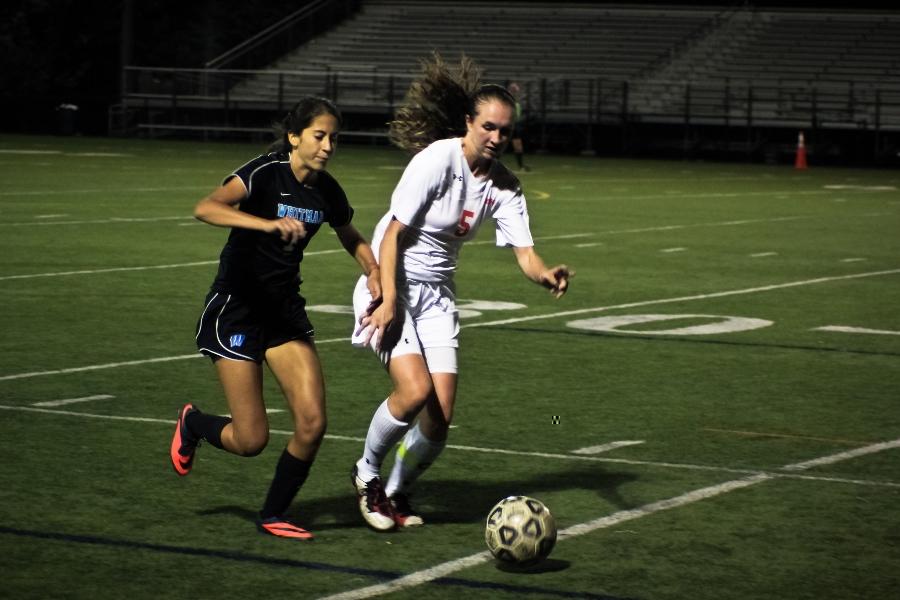 Delia puts the team on her back

From the beginning, the Vikings forced the Blazers to stay on defense through heavy offensive pressure. The defense was more than up to the challenge, however, with senior goalie Sadie Isakower shutting down every shot and seniors Michelle McGhee and Briana Villa clearing the ball easily. Senior captain Delia Trimble also made multiple attempts on the goal, and junior Taylor Bosse and sophomore Kelly Mayo both presented solid breakaway efforts.

Ten minutes into the game, a foul in Blair's penalty box led to a penalty kick that just slipped past Isakower's fingertips, and though the Blazers continued to fight hard for the ball, they were unable to level the game before halftime.

The Vikings remained in control into the second half, with a penalty kick shot five minutes in that once again just inched past Isakower. Though the Blazers continued to make offensive attempts, the Vikings out-ran and out-maneuvered them, keeping Blair on the defensive.

Isakower continued to make beautiful saves and the defenders—particularly senior Adrianne Kehne, who frequently fed balls to the forwards—kept the ball away from the goal as much as possible. Nevertheless, the Vikings managed to score a third time two minutes before the whistle on a breakaway strike that caught the defense away from the box, setting the final score at 3-0.

Despite the loss, coach Robert Gibb was optimistic about the game. "Whitman may be the best team in the county right now. They pose a lot of problems. The PKs put us down against a good team, but it didn't deflate us. We are very resilient, and we fought till the end," he said. Trimble, too, was pleased with the team's determination. "The effort was 100 percent," she said. "We really tried and we worked hard and came out strong for this game." 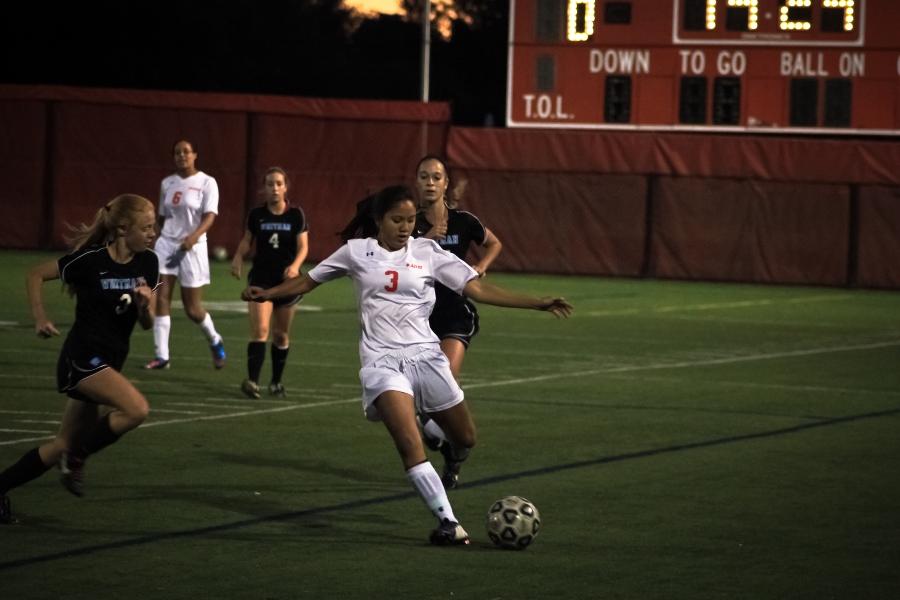 Photo: Junior Alexis Redford-Maung serves the ball up to the offense.

Junior Alexis Redford-Maung serves the ball up to the offense.  Photo courtesy of Sam Howells.

Still, Gibb believes there is work to be done. "We're coming together as a team. Sadie played great, and the defense was great. We kept them from being dangerous close to the goal. But you gotta be able to beat 'em," he said. "We've gotta find a way to win." Trimble also expressed the need for offensive work. "We need to work on connecting passes. Without them, it restricts the offense," she said.

Gibb also acknowledged the difficulty of losing from penalty kicks. "The effort was there. We played really hard. It's frustrating. Life and sports aren't always fair," he said.

The next game will also be a hard one, against a tough Churchill team. "I hope we win," Gibb said. "We need another shutout. Our defense deserves a feather in their cap, and we need to score a few goals." For Isakower, the loss will serve as motivation to do better. "We're gonna get a win," she said. "I think we definitely can."

The girls' varsity soccer team will play its next home game on Tuesday, October 1 against Walter Johnson at 7:00.