Girls' varsity softball (14-3) had a quick and fairly unchallenging win against the Churchill Bulldogs (8-9-1) Monday night. The game was framed by a great defensive and pitching showing from the Blazers. Key fielding errors on the part of the Bulldogs allowed the Blazer offense to zoom past Churchill and close the game, 18-1 Blair.

From the top of the game the Blazers dominated, with pitcher Karylena Cruz quickly striking out the first three Churchill batters. The second half of the first inning saw the Blazers excel offensively. Catcher Maria Cruz was part of an odd sequence when the team managed to score three runs without getting a hit after the Churchill catcher fumbled multiple pitches. The Blazers quickly and comfortably got on the board with little to no challenge from Churchill's defense. By the end of the inning Blair was up 10-0 with almost every player successfully scoring a run.

The second inning further exemplified the team's offensive and defensive dominance. In the first half the team's defensive chemistry and Cruz's sure pitching enabled them to swiftly knock out the first four batters. 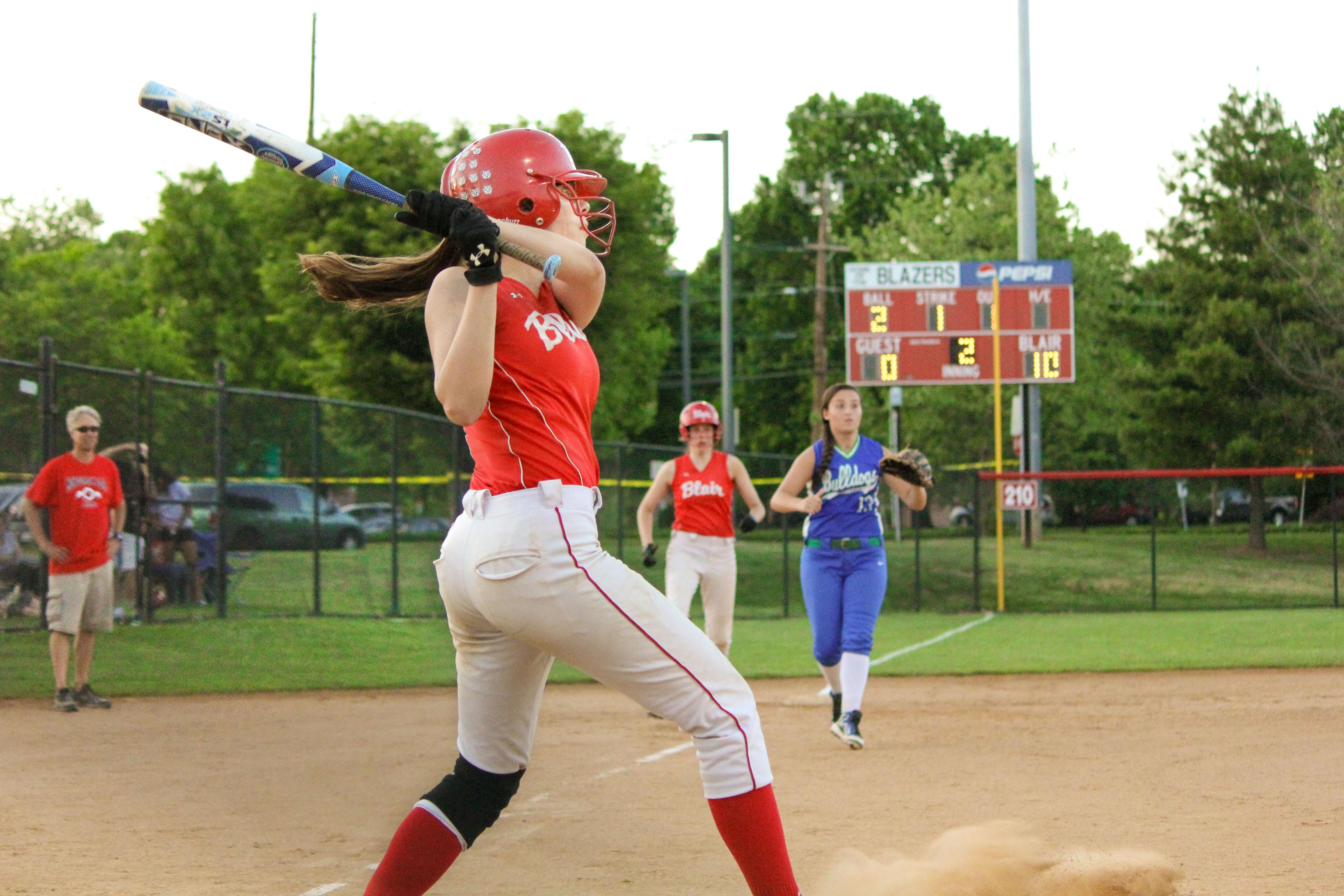 At the bottom of the second inning, the Blazers secured six more runs on the scoreless Bulldogs. During the score Churchill's offense put up a good fight against the Blazer defense. The Churchill offense scored their first decisive hit that ended in a base run. After a few more clean hits and two runners on first and third, Churchill was close to scoring its first run. However a great catch on a pop fly by second baseman Camilla Arias closed out the inning and kept Churchill from scoring.

In the fourth inning Hoelman gave the first strand a break, subbing in bench players to replace most of the infield defense. These players, seniors Emily Daly and Sasha Grossman and sophomores Lily Montgomery and Alison Mackenzie, carried out solid back fielding that closed out another 1, 2, 3 inning.

During the second half of the fourth inning a health emergency delayed the game by about ten minutes. After it was resolved, Hoelman imposed further lineup changes that allowed every player on the Blair team an at bat. Daly batted first and hit a grounder that the Bulldogs failed to field well. Next up was sophomore Mika Yatsuhashi who was awarded a walk. With Mackenzie's successful at bat, the bases were locked and loaded. Daly did not score a run because the next player at bat was tagged out before reaching first, but both Yatsuhashi and Mackenzie scored.

Despite giving up a run in the fifth and final inning, the Blazers dominated throughout the game and ended it 18-1 Blair. 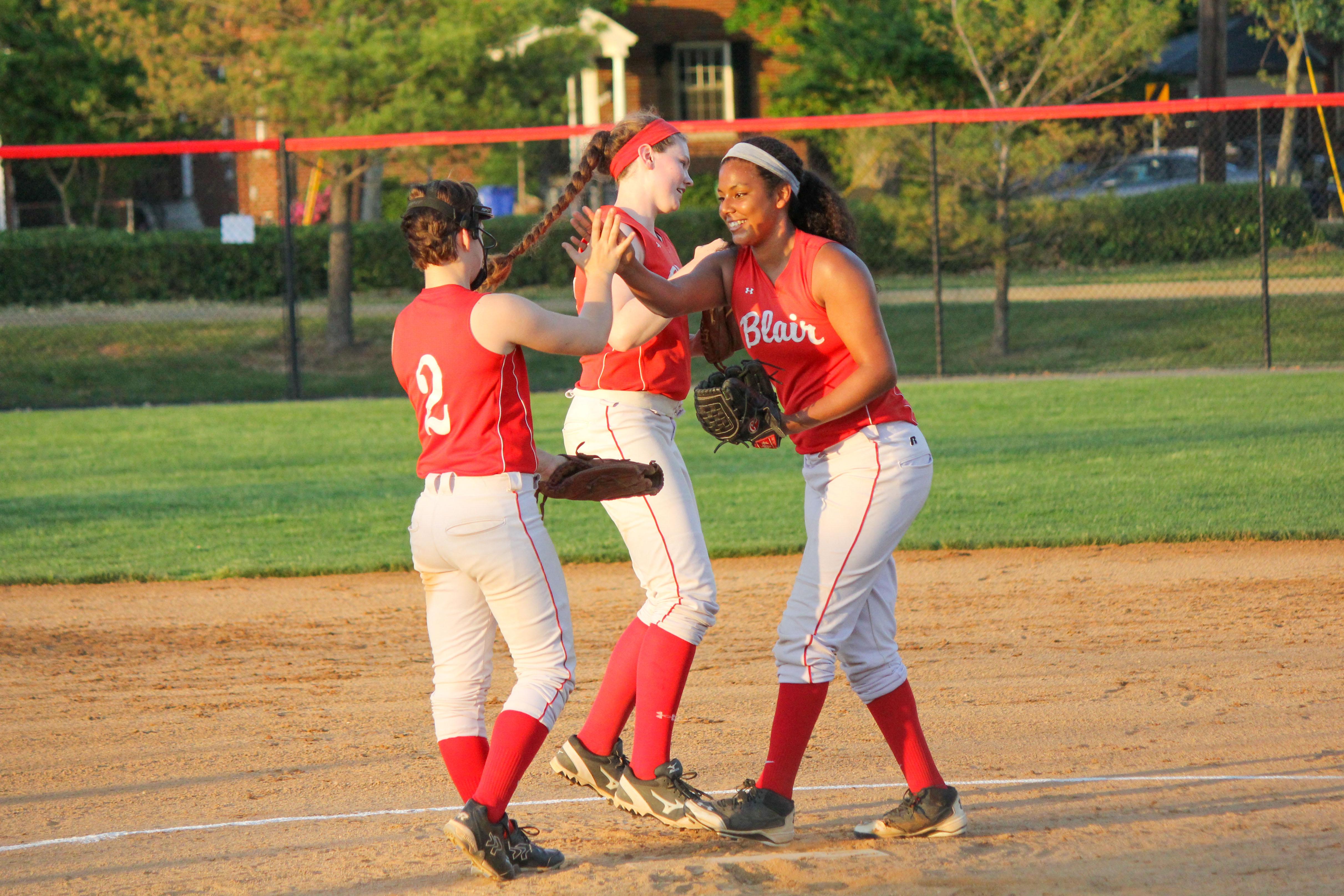 As their first game of the playoffs, it tested the Blazers because of its lukewarm pace and lack of challenge. "I think it was a confidence builder but I would have preferred something a little more challenging,” junior third baseman Mildred Devereux said. Devereux craved a challenge that could properly prepare the team for the rest of the post season. "I wish we'd had something with faster pitching so we could adjust to the faster pitching we're going to see later in the post season,” Devereux said.

With the ease of the game and little resistance from the Churchill fielding offense, Blair coach Louis Hoelmann began to fear complacency on the part of the Blazers. "Sometimes in a game like that, it's hard to stay focused,” Hoelman said.

But the team's steady defensive intensity and offensive ability reassured Hoelmann. "We were able to stay focused even though early on we kind of realized we were going to win that game and dominate that game,” Hoelmann said.