Blair comeback keeps the game close to the very end

The Blair Blazers (6-5) team lost 59-54 to the Magruder Colonels (5-5) on Tuesday, January 11th in the Blair gymnasium. After getting behind early, the Blazers fought to come back and closed the gap to five points in the fourth quarter.

Things began poorly for the Blazers, as the Colonels opened the game with a smothering full-court press that forced Blair to turn the ball over, which gave the Colonels a series of easy fast break buckets on the other end. The formidable Magruder defense, along with subpar shooting on the part of the Blazers allowed the Colonels to jump out to an early 11-0 lead.

Blair didn't start to come alive until there were two minutes left in the first quarter, when senior guard Camille Estrin made a three-pointer, followed by a fast break layup from junior guard Alexis Moses on the ensuing possession, which helped the Blazers' keep the deficit to 12 entering the second quarter. 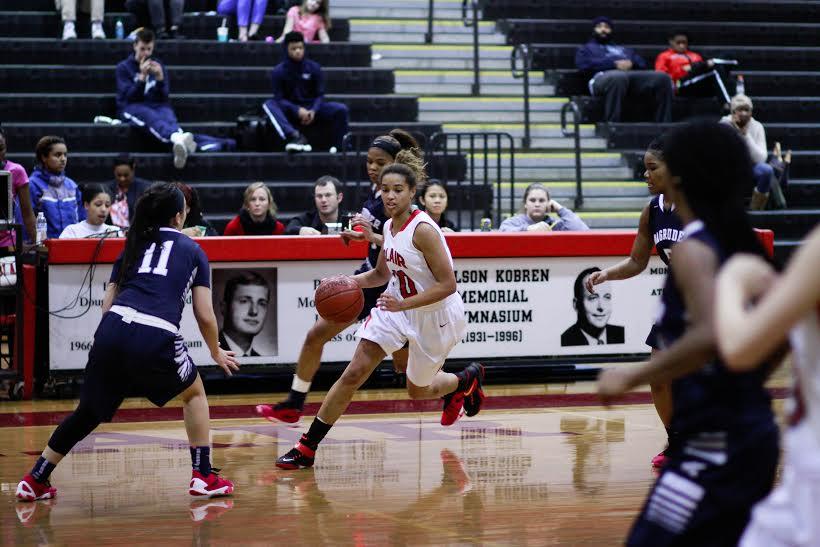 Photo: Senior captain Alexis Moses cuts across the court. She helped keep the Blazers' offense alive for most of the game.

Photo: Senior captain Alexis Moses cuts across the court. She helped keep the Blazers' offense alive for most of the game.


The Blazers got their heads back into the game, and started to come back from the beginning of the second. Moses scored a quick four points off of a layup and two free throws, and junior forward Lauren Frost added another four on a pair of mid range jump shots in the 15th minute. The Blazers continued to score until the last two minutes of the quarter, when Magruder got back on the front foot. Two quick steals in the eighteenth minute gave them back the lead, and the half ended with Blair down by five.

According to sophomore center Nora Olagbaju, the second quarter was the turning point in the game for the Blazers. "In the beginning we made a lot of mistakes and gave away a lot of layups, which set them up for a big lead. When we started playing better defense in the second quarter, we started picking up our shots and that's when the game got a lot closer," said Olagbaju.

The Colonels and Blazers both came out of the half strong. Estrin and Moses helped the Blazers keep up with the Colonels all the way to the midway point of the third quarter, where the Blazers trimmed the deficit to four with five minutes left. After that, the Blazers let the game slip away as their defense faltered, and the Colonels got hot from beyond the three point arc. Behind two three point field goals, the Colonels went on a 12-4 run to close out the quarter and put the Blazers in a twelve point hole entering the fourth.

The fourth quarter started where the third left off. Magruder scored four quick unanswered buckets, bringing their lead to 19 with only five minutes remaining. Estrin answered with a long three, energizing the Blair offense. Frost scored on a layup and hit the resulting free throw. Two steals by Estrin led to another four points from Olagbaju. The Colonels scored a quick layup, but Frost and Olagbaju each countered with a mid range two. 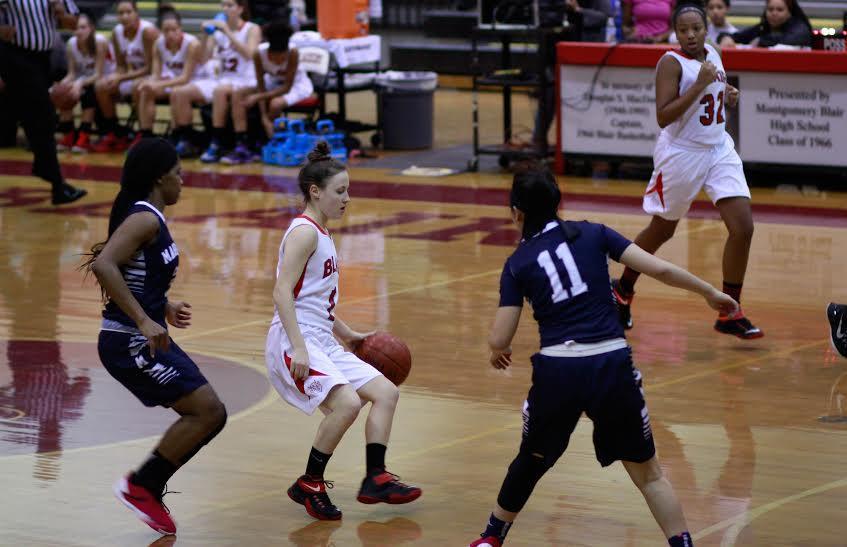 Photo: Senior captain Camille Estrin evades Magruder defenders as she brings the ball down court. Estrin scored 14 in the loss.

Photo: Senior captain Camille Estrin evades Magruder defenders as she brings the ball down court. Estrin scored 14 in the loss.


Only one minute remained, and the Blazers were still down by five. Two possessions could have tied the game, but the Magruder offense proved too much, scoring a long two as the shot clock expired. Moses scored down low off of an assist from Frost, but to no avail. The game ended and the Blazers suffered a 59-54 loss.

Head coach Carlos Smith chalked up his team's play as too little, too late. "We're a very competitive team, but tonight we just waited too long to be competitive. We need to work on making shots and all of the other little fundamental things," said Smith.

Although the Blazers lost, the team was able to take out some positives from their performance. "At the very end of the game we played very intensely, we played great defense, and we settled down towards the end of the game.” Moses said. The Blazers will look to recover from their loss as they take on the Northwood Gladiators (0-9) at the Blair Gymnasium on Friday.