Blair (13-1) varsity girls' soccer soundly defeated Northwood (3-8-1) 7-0 to close out the regular season Tuesday night. Because it was the final home game before playoffs, the Lady Blazers had their senior night and, as if purposely, seniors scored six out of Blair's seven goals.

After a dominating season that included winning the division championship, the Lady Blazer's earned a bye from the first round of playoffs. Their first playoff game is next Tuesday at home against the winner of Thursday's game between Churchill and Richard Montgomery. Senior co-captain Anna Rassman feels confident facing the postseason. "We're going to go far in the playoffs," Rassman said. "We'll do big things." 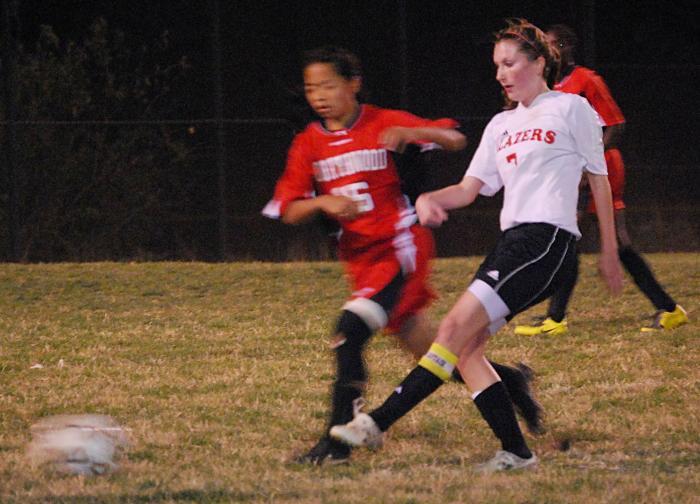 Photo: Senior Annie Worden directs the ball away from a Northwood opponent.

Photo: Senior Annie Worden directs the ball away from a Northwood opponent.

But before focusing on the postseason, Blair had to finish off the Gladiators. The Blazers started out slow but picked up pace and within the first ten minutes of the game, put themselves on the scoreboard when senior forward Jenny Williams scored on a shot to the lower right corner. But that wasn't nearly the end of Blair's offensive streak. With about thirteen minutes left in the first half, senior co-captain Annie Worden navigated her way past the Northwood defense and scored to push the lead to 2-0. Blair's third goal came on a shot by sophomore Saleiha Mayer-Marks with seven minutes in the half.

The Blazers continued the relentless attack into the second half, racking up goals against the clearly inferior Northwood team. Ten minutes in, senior Jeanette Chavez put one past the Northwood keeper, and Rassman added her own ten minutes later on a rebound from a shot by sophomore forward Sofia Read to increase the margin to 5-0. With around ten minutes left in the game, senior forward Susie Branson scored on a penalty kick and later assisted Worden with her second goal of the game to bring the final score to 7-0. Blazer defense kept the Gladiators away from the goal and senior goalie Xenia Oroxom assured the shutout for Blair.

After the game, seniors were greeted by a group of supporters. Head coach Robert Gibb praised each individual senior and the seniors were ceremonially presented with wacky gifts from the juniors on the team. "They're great role models to the younger players," Gibb said. "They have great leadership. They're the kind of athletes you want on your team." Gibb said that he doesn't feel too sad about the regular season ending because he considers the playoffs to be the next season, with high hopes for a long playoff run for Blair.

Worden feels bittersweet about finishing her final regular season with Blair. "It's really sad. It feels like the end of an era," Worden said. "But on the other hand, it feels like I've accomplished something."

The Blazers' first playoff game is on Tuesday, Oct. 28 at 7 p.m. at home against the winner of Richard Montgomery vs. Churchill