Girls' varsity soccer (8-1), with the best record among all Blair teams, beat Sherwood 2-0 in a match that showed skilled passing technique. Blair dominated possession of the ball by keeping it in Sherwood's half of the field for most of the game, and attempted several close goals.

Blair scored their first goal about 20 minutes into the first half. After a quick succession of passes, junior forward Sofia Read received the ball and charged toward the goal, outrunning the Sherwood player who was guarding her. With an open path to the goal, she kicked the ball into the lower left corner and out of the Sherwood goalie's reach.

Blair's second goal came toward the end of the game. With approximately seven minutes remaining, Kelly Pelz-Butler passed the ball to Read, who passed it on to sophomore forward Jamie Kator. Kator slammed the ball squarely into the center of the goal.

In both goals, Blazers executed long passes across the field before scoring in order to scatter the opponent's defense, according to head coach Robert Gibb. "We like to get it out wide - switch the field because our field is so wide," Gibb said.

Blair's skilled passing was a key factor in their win. Especially pronounced was Kator and junior midfielder Carolyn Hirshon's camaraderie, with the ball fluidly traveling between them and down he field during the second half. The agile Blazers were able to keep the ball out of Sherwood's reach for most of the game. 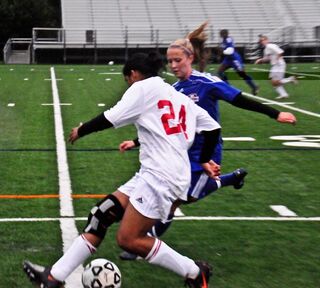 Gibb and senior co-captain Imani Pierre commented that Blair played well together as a team. "Everyone put their part in," Pierre said.

While the win was a joint effort, there were standout players. Read and Kator played well on offense, senior co-captain Darcy Pelz-Butler and Kelly Pelz-Butler shined in the mid-field and Pierre held up the back, according to Gibb. Senior defense player Lauren Kestner stood out with her strong interceptions, helping to keep Sherwood away from Blair's goal.

Despite the win, Gibb believed that the Blazers could have scored more goals; senior co-captain Kelly Pelz-Butler agreed. "I think we could have played better," she said. Gibb also pointed out that this match was Blair's fourth game in eight consecutive days. Gibb called it "a game we had to get through."

The rainy weather posed some challenges of its own. Pierre remarked that the turf became slippery, leading to some loss of traction. The players' bodies stiffened up due to low temperatures. The ball would also become lodged in puddles, Pierre said. Blazer stadium even lost power during the second half, but the game went on.

The Blazers were not fazed by the dismal weather conditions. According to Gibb, the rain did not have a negative effect on team morale.

For the Blazers' next game, which will be against Richard Montgomery, Gibb expects the girls to continue their winning streak with dominating possession. "We should be able to dictate, play and move the ball the way we like. Maybe score a few more goals," said Gibb.

The girls' varsity soccer team plays their next home game against Richard Montgomery on Oct. 19 at 7:00 p.m.