Blair varsity girls' volleyball defeated the Whitman Vikings in straight sets on Thursday, bringing their record 6-3. The Blazers easily won the first set 25-10 and the second 25-20, but began to fall short during a suspenseful final set before ultimately prevailing 27-25.

Blazers began the first set with a quick two-point lead, thanks to strong volleys from senior co-captain Olivia Bozik and sophomore Julia Skolnik that Whitman could not return. Although the Vikings played aggressively, they were prone to errors and miscommunication that led to dropped balls and missed hits. The Blazers, on the other hand, dominated the court with effective passing, impressive serves and saves and minimal errors. The Vikings succumbed quickly, with an out-of-bounds hit ending the set at 25-10. 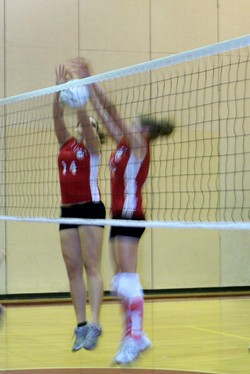 Photo: Seniors Molly Martinez and Olivia Bozik reach for the ball after a tough serve from Whitman. Blazers cruised their way to victory with a 3-0 win.

Photo: Seniors Molly Martinez and Olivia Bozik reach for the ball after a tough serve from Whitman. Blazers cruised their way to victory with a 3-0 win.

The second set started similarly for the Blazers but the Vikings began gaining momentum. The Blazers began to mimic the weaknesses of the other team throughout the set, such as weak hits and sloppy passing, allowing their opponent to stay close behind. Nevertheless, the Blazers did not allow technicalities to prevent them from exhibiting great defensive play, such as superb saves from Blazers all around and impressive blocks from Bozik and senior Molly Martinez, bringing the score 24-16.

With newfound motivation, the Vikings took a quick lead with the Blazers following closely behind as both teams determinedly held their own during forceful rallies. Blazers erred and ended the intense rallies with failures to save incoming attacks from the Vikings, soon falling behind 18-12. Two aces and several successful hits later, Blazers were able to up their game and tie the score 21-all. From thereafter, both the Vikings and the Blazers were neck-and-neck until 25-25, neither relinquishing their desire to win the set. Ultimately, Blair won two points from a successful spike from Bozik and a strong serve from senior co-captain Julie Brice, which was hit out of bounds by the Vikings, capturing a 27-25 victory for Blair.

Brice was satisfied with the outcome of the game and felt the girls showed the most determination and immense improvement. "Today we had a lot more hustle than was seen in previous games," she said. "We still need to work on hits but overall we really improved on serving and covering."

Coach Heather Amell was also proud because the team defeated the first team in a series of matches against highly ranked teams. "[Whitman] is a tough team," she said. "The last four teams are tough. [Winning this game] gives us a lot of confidence and motivation."

The girls varsity volleyball team plays its next home game on Friday, Oct. 12 against Magruder at 6:30 p.m.