Blazers pull through for 3-1 win

The varsity girls' volleyball team outlasted the Paint Branch Panthers in an up-and-down match on Tuesday, winning three out of four sets to bring their season record to 1-1. The girls pulled off impressive wins in the first two sets, 25-23 and 25-12, but fell 25-23 in the third. The team recovered in the fourth set, pulling a narrow 26-24 win to capture the game 3-1.

Senior co-captain Julie Brice set a vigorous pace to open the game with two strong serves that the Panthers could not successfully return. Although the two teams were evenly matched, the Blazers held their ground with strong, consistent serves and good teamwork. The Blazers took advantage of the opposing team's weaknesses, allowing stray hits to fall out of bounds. 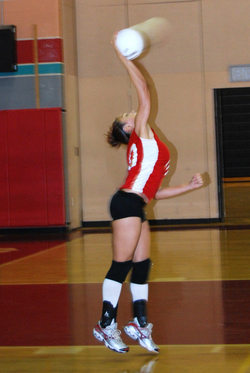 Blair's offense continued its steady barrage throughout the rest of the first set, despite a net fault and some miscommunication. Sophomore setter Elaine Brice delivered two consecutive aces, and sophomore Kaiti Hague's powerful finishes were formidable.

Near the end of the set, senior hitter Molly Martinez and co-captain senior Olivia Bozik set up successful blocks while the Panthers' defense made careless slips, earning the Blazers a 25-23 win.

The second set began well for the Blazers. Disheartened by their first-set loss, the Panthers' performance slipped. Blair players returned weak serves from the Panther offense and pulled ahead easily with powerful hits and unfaltering serves. The Blazers took advantage of an unresponsive defense, scoring easily en route to a 25-12 win.

Paint Branch stepped up their game in the third set, but both teams were plagued by errors. The Panthers' offense was sloppy as the team hit balls that bounced off walls and back onto their court. The Blazers fell behind through their faults – a double hit and a foot fault. Despite these careless mistakes, the two teams still managed to set up fairly consistent rallies. In the end, the Panthers were able to deliver hits that the Blazers could not return, resulting in a 23-25 loss for the home team.

The fourth set began with similar mistakes from both teams – missed volleys and balls that went out of bounds. However, both teams stepped up their offense with strong and fast serves. The score remained close for the entire set, with Blair trailing Paint Branch by two points until the closing minutes. The Blazers pulled their defense together and let the Panthers' mistakes take their toll, gaining points from Panther serves that went out of bounds to capture a 26-24 win in the fourth set. 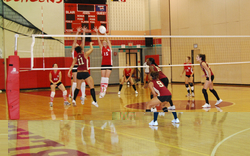 Photo: Senior Olivia Bozik spikes the ball over the net.

Although they won the game, Brice called today's performance both "good and bad." She was impressed by the team's performance in the first two sets, but not so much in the third. The fourth, she said, "was sloppy in the beginning, but we made up for it in the end." According to Brice, the team still needs to improve communication and covering off blocks.

Overall, Coach Heather Amell was pleased with the events of the game, saying that the team did a great job and worked together well. Co-captain Brice attributes the win to the team's persistence. "We worked hard all the way to the end," she said.

The varsity girls' volleyball team plays their next home game on Wednesday, Sept. 19 against Quince Orchard at 6:30 p.m.