The Blair Blazers (4-0) were able to soundly defeat the Clarksburg Coyotes (1-2) on Monday night. Blair pulled together a strong defense and kept pounding Clarksburg with fast spikes and consistent serves, resulting in 3 sets for the Blazers and a quick match; the scores for the sets were 25-12, 25-16, and 25-16.

The first set started off in favor of the Coyotes, as they came in the game with spirits high and an aggressive approach. The Blazers were a bit jumbled, and it took them a few serves to get on their feet. A well placed block by senior Leila Habib ended the Coyotes early lead, and consistent service by freshman Tiffany Mao soon got Blair back into gear with a score of 10-8. Once they got their chance, the Blazers did not look back. Good defense from the likes of senior Angela Zhou and junior Karylena Cruz kept the Coyotes at bay, while powerful serves from senior Jade Liu helped secure 10 consecutive serves and the set itself.

The Coyotes did their best to shake of the first set, coming back in the second with strong service and more coherence. This showed itself as the two teams battled it out towards the beginning; the score kept shifting from one team to another before Blair finally secured a strong lead. It kept it up thanks to powerful service from freshman Tiffany Mao, ending the set with a 9 point lead.

The set was hard fought due to Clarksburg's renewed vitality, but exceptional digs and service kept things interesting. Blair's offense is what finished the situation with great spikes from freshman Maggie Wang.
Junior Christine Gao felt that this match marked several improvements for the team. "Our serve receive was definitely better than last time," Gao said. "We also played smarter this game, towards the start we noticed that they weren't really good at getting short balls, so our hitters started hitting shorter balls."

The last set finally saw the Blazers start off with the lead and keep it going all the way through. Once again consistent servicing shined, helping the Blazers to maintain control of the set. Senior Leila Habib and freshman Maggie Wang both served consecutively for 5-6 times. 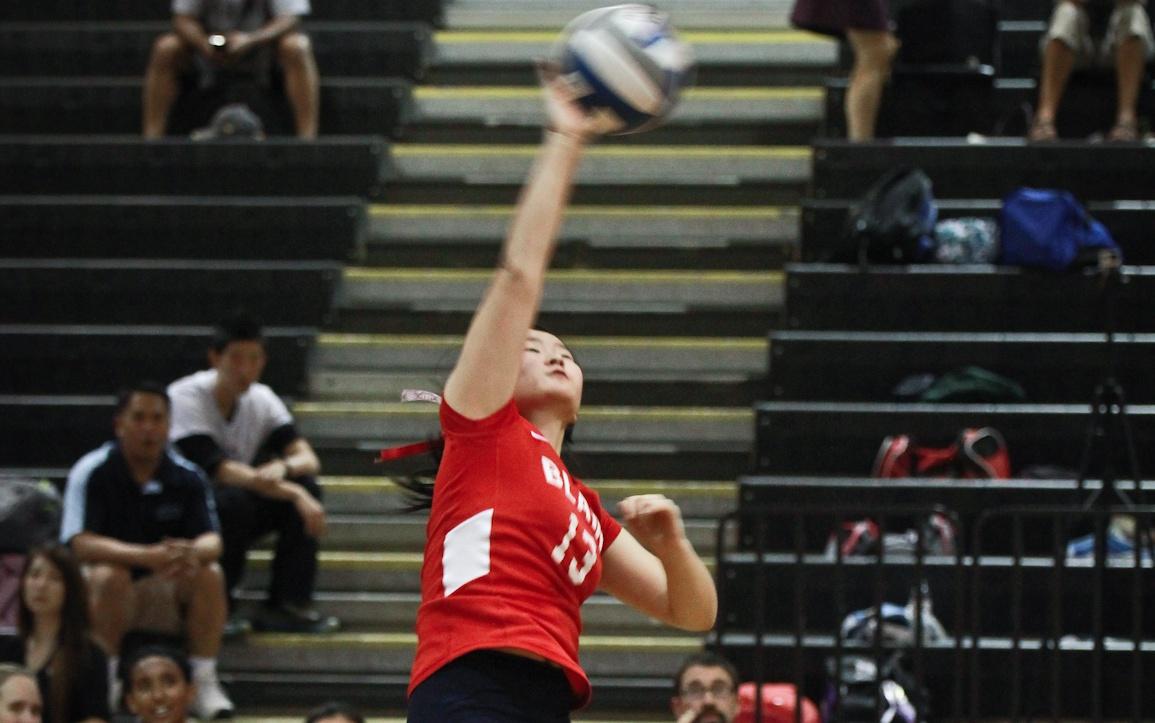 Those instances where the serve did not decide the situation immediately, a dig from senior Jade Liu coupled with a spike from freshman Tiffany Mao would rip through the Coyote's defense. A magnificently placed block at the end by senior Leila Habib sent the ball zooming past the Clarksburg players and ended what proved to be a great match for the Blazers.

Though it was definitely a wonderful spectacle the match made light of some areas that the team could work on. Specifically senior Jade Liu thought that communication was an important area of improvement. "We still need to work on our communication, after we practice a lot I think we'll develop a good relation on the court and be all good." Freshman Tiffany Mao seconded this idea saying, "communication is a huge problem between us; even though we were trying it really hasn't gone away, so we need to put in more effort."