The girls' varsity volleyball team pummeled the Northwood Gladiators in three straight sets in a quick game that boosted their season record to 4-3. The Blazers dominated in the first and second sets with strong finishes of 25-18 and 25-14 respectively, but slipped in the third for a lengthy set that eventually ended with a 31-29 win. 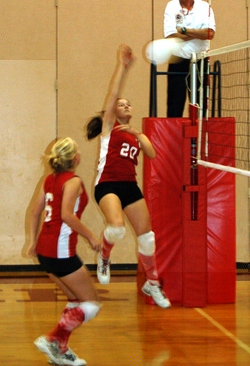 The beginning of the first set marked the two teams as equally matched. Both teams made similar mistakes, botching hits and serving out of bounds. Points were exchanged back and forth, as neither team could hold solid leads over the other.

The set shifted in favor of the Blazers when the Gladiators' clumsy serves began to add up and the Blazer defense tightened its game. Senior co-captain Julie Brice's narrow saves and powerful hits marked her as a force to be reckoned on both offense and defense.

Consistent service from the Blair offense pulled the Blazers forward. Sophomore Julia Skolnik served the first ace of the afternoon, and junior Dorcas Olawuni delivered smooth serves that the Northwood team failed to return. Gladiators' continued sloppiness ensured Blazer dominance and resulted in a 25-18 win for the home team.

Blazers began the second set with clumsy serves and slow reactions that allowed Gladiators to pull ahead. However, a strong serve from Skolnik, a successful tip by senior Molly Martinez and the Northwood mistakes put the Blazers back up.

The Blazers held a slight lead of 10-9 after co-captain senior Olivia Bozik rescued a spike, setting up an unpredicted return that caught the Gladiators off guard. This slim lead was solidified by a 9-0 run with junior Caitlin Ludington serving. Ludington's solid consistent serves, coupled with Brice's strong finishes, put Blair comfortably ahead at 19-9. Although the Blazer defense slipped, ending some rallies with dropped balls, strong service from Skolnik and Brice maintained the Blair lead, winning the set by an impressive 25-13 margin. 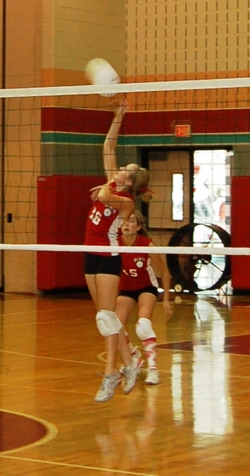 Photo: Junior Caitlin Ludington spikes the ball as the Blazers cruise to a victory over the Northwood Gladiators Friday.

Photo: Junior Caitlin Ludington spikes the ball as the Blazers cruise to a victory over the Northwood Gladiators Friday.  Photo courtesy of Molly Brune.

The third set began as a lengthy continuation of the two teams alternating success and failure. Both teams suffered from serves that landed in the net, sloppy defense and hits that were too strong and landed out of bounds. The scores climbed into the double digits but the two teams remained either tied or at a margin of one point – until Brice stepped up to serve and led Blair to a 21-17 lead.

Unfortunately, this edge was lost as the Blazers fell to mistakes such as serves that fell in the net and a foot fault, resulting in a 24-24 tie. Blazers and Gladiators both fought hard to gain an edge, but both teams missed hits and served out of bounds, continuing the tie up to 29-29. Finally, sophomore Kaiti Hague pulled through and sealed the set 31-29 with two strong spikes.

Both Coach Heather Amell and Brice were proud of the team's performance this game and the way the girls were able to rally at the end of the third set. "We made a lot of mistakes," said Brice, "but we were able to come back to win." Amell commended the teamwork of the girls. "The team really came together and fought back until the end," said Amell.

Amell also notes that the team overall has improved on technique. "We've been working on passing," she said, "and we did better this game." According to junior Elizabeth Fang and sophomore Chloe Sheridan though, the team still has key skills that it needs to improve, such as consistency in covering and hitting.

The varsity girls' volleyball team plays their next home game on Thursday, Oct. 4 against Whitman at 6:30 p.m.