The Blazers fought a hard battle against the Warriors, eventually losing the match

The Blair girls' varsity volleyball team (5-2) played a long and intense match against the Sherwood Warriors (11-0), but was ultimately defeated. The match was tough from the get-go as both teams played their all; the scores for the three sets were 18-25, 19-25, and 19-25.

Despite the loss, Coach Christopher Klein was contented with the team's overall performance. ” I think it went pretty well because we didn't play scared," he said. "We played really tough and really scrappy. Any team you play against and you're 17 points and above, that's a real competitive match. We were at 19 on them in two and 18 for another. We really made them work."

The first set started off the match with intensity and flair, as both teams came in ready for a fight. The Warriors took the lead early on, establishing their presence on the field with brutal spikes and a strong defense. The two teams were often matched up pretty well; the ball kept moving back and forth across the court as excellent digs were executed on both sides. Digs from seniors Angela Zhou and Jade Liu helped negate some of Sherwood's more powerful attacks, while spikes from Freshmen Maggie Wang and Tiffany Mao helped garner some beautiful kills. Unfortunately Sherwood hung on to its lead and pulled through despite Blair's efforts.

The second set once again featured Sherwood taking an early lead; they showed no indication of letting up on their powerful attack patterns. Successful blocks by senior Leila Habib and junior Karylena Cruz kept the Warriors on their toes. Yet Sherwood's spikes too often zoomed past Blair's defenses and straight to the floor. Coordination and communication proved important during the set as players fought to keep the ball in play. Combinations such as a dig from Jade Liu, followed by a set by Angela Zhou and finally a spike by Maggie Wang helped keep the team dynamic and close in pace with Sherwood. The Blazers ultimately could not keep up and were defeated in the end. 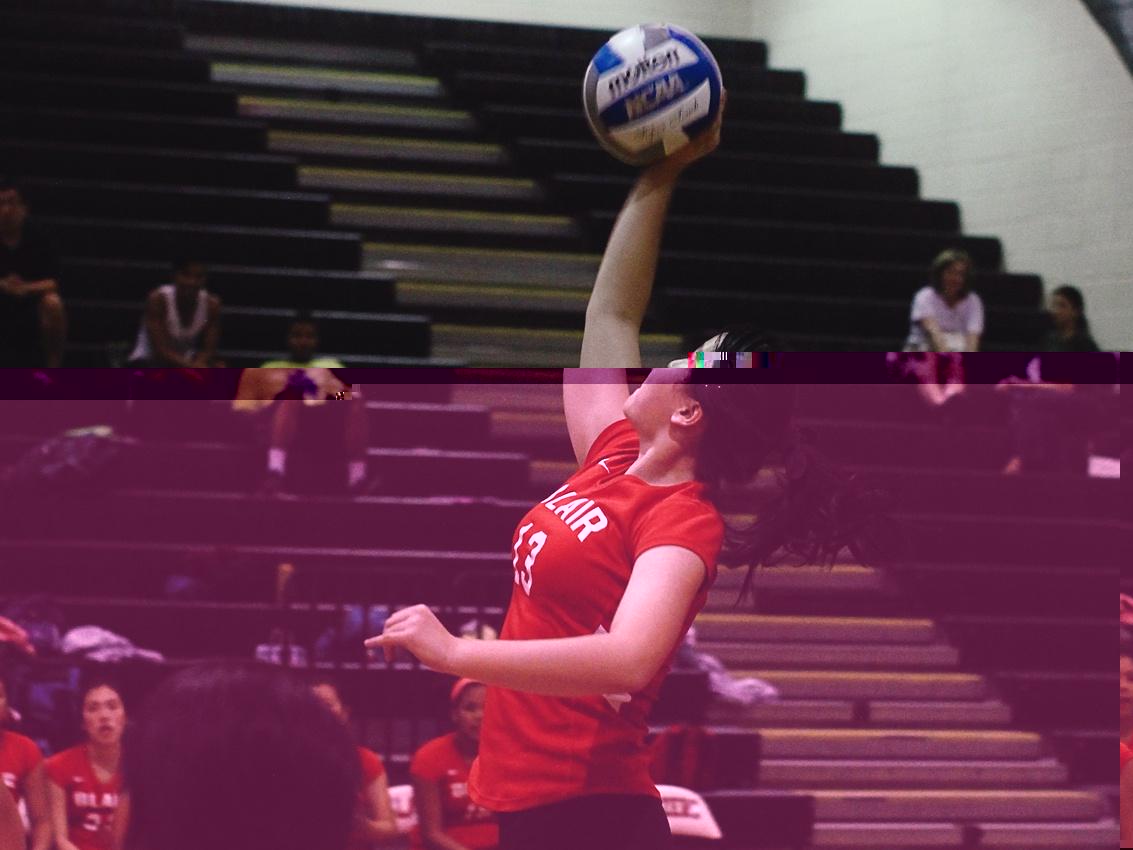 The last set was the most contested and hard-fought. It started off once again with a powerful Sherwood lead, but this time the Blazers quickly evened out and kept the set heated. The Warrior's saw their defense overcome at certain points as a powerful hit or coordinated tip wove its way past their blocks. Some of the match's longest exchanges of the ball occurred during this set as both teams refused to let the ball fall. Amazing digs by Jade Liu and Angela Zhou persisted through the duration of the set as they strove to keep the ball in play. In the end though, the Warriors were able to secure a close victory.

Senior Jade Liu felt that the match featured some improvements in the team's performance. "I think we did a lot better serve-receive wise," she said. "We really fought it out, I feel like we played really hard, and I think we did our best and it was really good."

Coach Klein explained his intentions of bringing it a few new plays for future; he also expressed his hope for the team. "I'm going to try and work in a few new sort of different attacks during practice" he said. "Ultimately, if we just keep playing our game and keep improving and keep reducing mistakes then really anything can happen."