The Whitman Vikings (7-4-1) narrowly beat the Blair Blazers (6-6), 17-25, 21-25 and 17-25. For Blair, this was senior night, the last home game of the season, making the game more animated and exciting. Although Blazers lost, their amplified spirit and excellent teamwork helped them to play an excellent game. 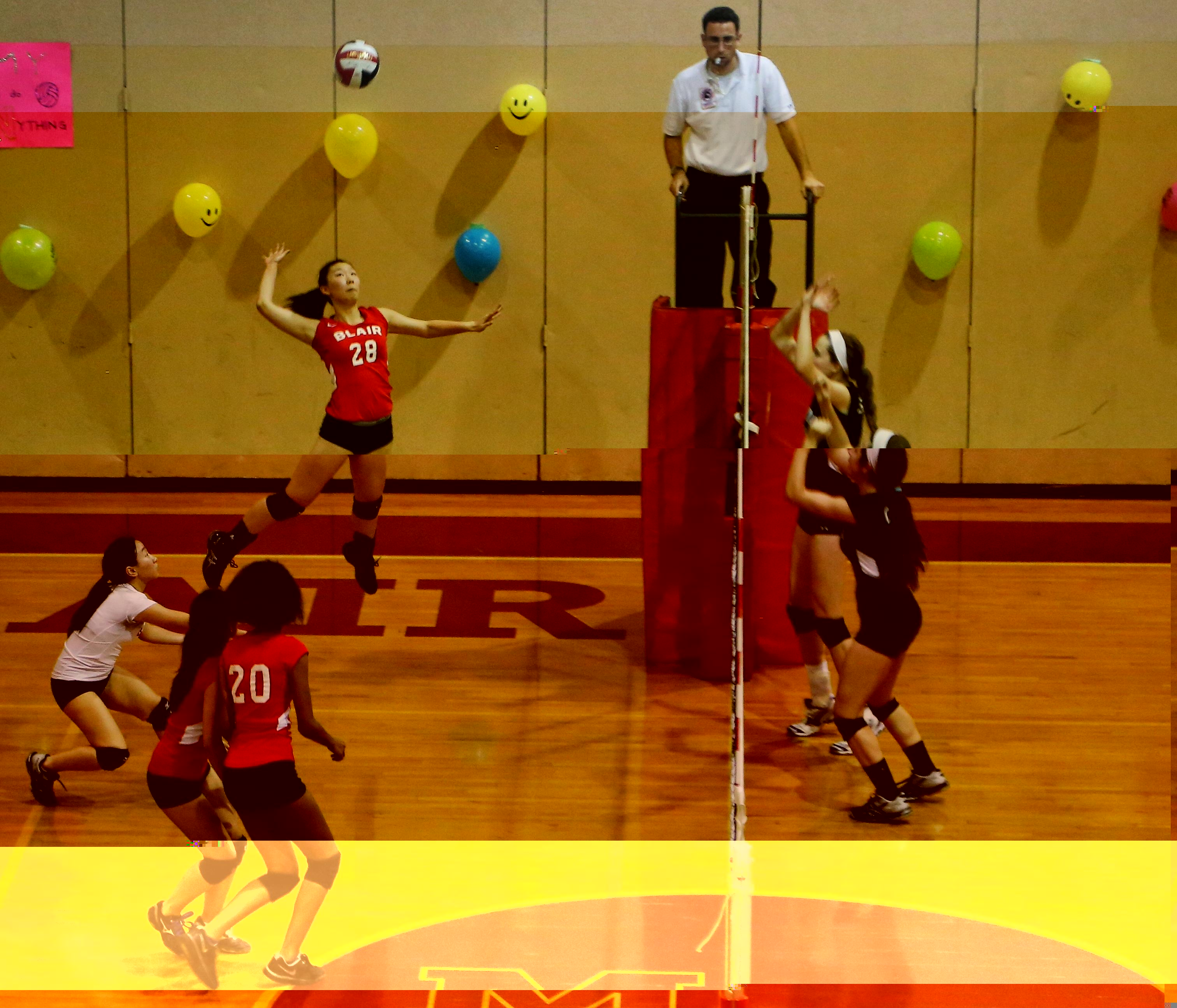 Spirits started high when, just before the beginning of the game, Coach Christopher Klein made a short speech in honor of the seniors, captain Amy Yan and Tatiana Sindass, and their importance to the team. "Anyone who's an old hand at volleyball knows that it's a sisterhood. That's what it takes to make things work, and that's what we have here," Klein said.

In the first set, the Vikings initially took the lead, racking up six points as Blair worked hard to overcome their sharp offense. Soon, however, Blair's communication and teamwork allowed them to catch up to Whitman. Junior Rowan Afflerbach and Junior Angela Zhou defended the net and executed a few dumps, and junior captain Jade Liu executed essential digs to save the ball. Junior Leila Habib's dumps were also spectacular, winning Blair a few more points. In spite of all this, they could not quite catch up to Whitman's already established lead and the Vikings took the set.

The second set began with a strong Blair lead. Yan, as usual, had many impressive kills and aces. Whitman's kills were strong, too, but every Blazer worked hard. There was one magnificent play involving Liu, junior Maria Novitskaya and Yan. Habib's sneaky dumps continued and Novitskaya's aces helped greatly. Sindass had some great kills, and Milica Radoja had some great serves. They fought hard, tying with Whitman on two separate occasions and almost winning the set, but were eventually defeated.

At the start of the third set, the intensity and team loyalty mounted for both Whitman and Blair. They were evenly matched, trading points throughout, but again Whitman managed to form an advantage that the Blazers couldn't quite get past. Blair played well, with kills by Yan, great serves, and stellar defense. They made crucial mistakes, however, with some missed serves and passes that cost them a couple of points. Still, everyone's communication and cooperation worked really well. At one point, Liu, Afflerbach, and Yan managed to salvage a long set and killed the ball. This wasn't enough, unfortunately, leading to a Whitman win.

Although they played well, Klein believes that many errors at crucial moments led to the defeat. "We played our game, but there were a few too many mistakes. We were right with them, and I thought we'd take over at some points," he said.

After the game, Blair remained undaunted, celebrating the two seniors with an original volleyball-themed parody of "Best Song Ever" by One Direction. It was clear that the team was very close-knit. Yan will most miss the game itself and the closeness of the team. "I'll miss the friends I've made and the excitement of the game," she said.