Git out of Gitmo

Closure of detainment facility at Guantanamo Bay is crucial

White House officials have been discussing the prospect of closing the detainment facility at Guantanamo Bay – an interrogation and holding facility for suspects of terrorism. Last Friday, they finally acknowledged that this issue has become a priority.

But this realization has taken our government far too long. The administration has finally realized that the existence of Guantanamo Bay has created negative influences on public opinion that makes the benefits for national security seem insignificant. 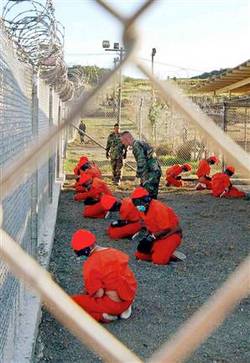 Detainees wait in a holding area at Guantanamo Bay. Photo courtesy of MSNBC

These criticisms stem from the allegation that detainees in Gitmo are tortured and detained for too long based on insubstantial evidence. If these allegations are true, the United States would be in violation of many international human rights protocols.

While the Defense Department's Office of Military Commissions' chief prosecutor Morris Davis stated in an opinion piece that culturally appropriate meals and literature, as well as outdoor time, are offered to detainees, he and the government seem to be missing the basic point – basic human rights. Detainees should not be kept in such a facility in the first place.

Davis also reasons that hearsay, testimony about other people that is not based on personal knowledge, is legal at Guantanamo because "a ban on hearsay is not an internationally recognized judicial guarantee." However using hearsay goes against ideals of equality, especially since these "international" war tribunals are conducted privately by the United States based on weak suspicions, and courts inside the U.S. normally ban the use of such testimony. The fact that these detainees are being tried on weak evidence that has been coerced from them or thought up as hearsay is a blatant insult to the justice system in the United States and to the international community.

European leaders have joined the United Nations in denouncing Gitmo and have urged for its immediate closure. Last year, the European Parliament voted in favor of a motion that urged the United States to close Guantanamo Bay once and for all.