Bathroom restrictions keep our minds on our bladders, not class 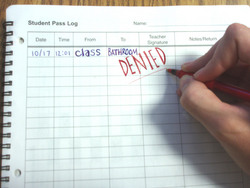 We've ruled out blaming this odd symptom on a possible reemergence of that maddening commercial, and we're pretty sure it's not number one on Ryan Seacrest's American Top 40. It took some time, but after careful research of the new school rules, we exhumed the culprit: the new rule restricting bathroom trips during class; a regulation that keeps our mind on our bladder, and nothing else.

Although the new bathroom policy is not always enforced, many teachers are abiding by the rule and causing many a problem for the students. Let's get our facts straight:

We have eight minutes between classes. That's eight minutes of shoving through 3299 other bodies, dealing with the accosting administration and stumbling into a desk before the bell sounds — and from the portables to the third floor, that's no easy feat for little legs like ours. According to previous Chips calculations, it takes six minutes to take a direct route from portable 7 (the portable furthest from the school) to room 315 — that's without taking into consideration locker stops and exhaustion after climbing three flights of stairs. Not to mention the arbitrary hallway encounters with teachers and friends who just can't seem to get enough of us. Keeping all that in mind, we'd probably have about 45 seconds to go to the bathroom, and nobody likes to be rushed.

Of course, some teachers just won't accept a bathroom-related excuse for flying into class a minute late. What do we get for trying to comply with the new terms? A big "tardy" in the grade book. If we go before class, we're late, but if we ask to leave during class, it causes a scene. It's a lose-lose situation, and squeezing in bathroom breaks in the rush to class just doesn't cut it.

Well, actually, it might, if we had incredible ESP abilities. But even the foreshadowing lessons in English class haven't taught us to predict when business just has to be taken care of. Most of the time, we can't recognize a bathroom break two hours in advance during lunch, as many teachers suggest as an alternative. And seriously, who wants to spend a quarter of their lunch break waiting in line just to use a stall with a door that actually locks?

"Is it an emergency?"

We don't mean to give compliant teachers a bad rap, but really, there has got to be some gray area here. Some teachers flat out refuse to let students go, even if it's an "emergency." What qualifies as an emergency anyway? Are we expected to report the urgency of our discomfort to an entire class? Our hands would not be reaching for the ceiling in desperation with our now-useless planbook pages out and ready to be signed if it wasn't an "emergency."

Maybe teachers figure that if it is urgent, we'll just leave. Which, to be honest would not cause trouble. Rarely does administration accost us in the halls as long as we're equipped with a plan-book and looking like we're on some sort of mission. Most likely, they figure we've got somewhere to go, and it's probably not to meet up with a couple of friends and party in the hallways for five minutes.

The most irritating part of this new policy is its illogical nature. The purpose, according to our shrugging teachers, is to limit the hallway lollygagging and the missed class time. The truth is, a three minute bathroom break will get us back on track in class much more efficiently than a 90-minute class that we waste, preoccupied with our discomfort.

The restrictions are also put in place to "crack down" on gang activity. So, if we understand correctly, the new rule will put an end to all those quick and dangerous hallway fights that qualify as "gang activity." And remember, if you're planning an attack, make sure to be there and back in the time alotted for bathroom breaks. Stealth is the key.

Our suggestion? Eliminate the rule altogether. There's no reason to accommodate a law that doesn't make any sense in the first place. We think it's safe to assume that everyone would be happier to see the rules go back to normal instead of a doctor's office full of Blazers with urinary tract infections.