"This is the toughest kind of game to lose," head coach Mark DeStefano said. "Many of the things that led to the loss are things we know we're better than. But now we can use this to improve ourselves for the long season ahead."

Fans swarmed the Blair gymnasium for the third game of the season, eager and ready to watch the Blazers' continue their undefeated march. The Blazers and Gladiators exchanged the lead and momentum throughout the game, as no team could take complete command of the court. As forecasted by the numerous lead changes, the game came down to the wire. 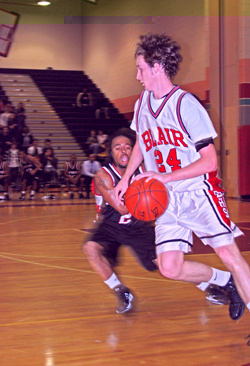 Photo: Junior Mike McClain dribbles the ball away from a Northwood defender on Tuesday's varsity basketball game. Blair had a close loss at 58-56.

Photo: Junior Mike McClain dribbles the ball away from a Northwood defender on Tuesday's varsity basketball game. Blair had a close loss at 58-56.

With a minute left in the game, Northwood slid past Blair's defense and sank a pair of free-throws to extend their slim lead to 57-53. The Blazers quickly ran the ball back up court, but passed it around patiently waiting for the opportune moment despite the deafening roars from the stands. In a moment of confidence, junior guard Wayne Henderson shot the ball high in an attempt to sink a three-pointer. The shot was off the mark, and hands from both teams reached for the basketball. A couple Blazer tip-ins also failed, and soon the ball popped back out to Henderson. Henderson sunk a perfect three-point shot on his second attempt and sent Blair's supporters into a fury.

Down 57-56, Blair forced a poor shot but recovered the ball with 16.1 seconds left. The Blazers' first drive to the basket was no good, but they regained possession for yet another chance at a victory when Northwood knocked it out of bounds. After Blair's last timeout, junior center Leon Sampson bobbled the ball on an inbounds pass. Northwood drew the foul on the ensuing play and sunk the last basket of the game for a tragic 58-56 final score.

The winning strategy for Northwood was a full-court press, which took Blair by surprise from the opening whistle. The Blazers were overwhelmed, resulting in turnovers on three of their first four possessions. Northwood subbed on nearly every opportunity in order to sustain pressure against the Blazers on their effective man-to-man defense. Eventually Blair's backcourt was able to work together to defeat the press, but the anxiety resulted in a number of crucial turnovers and poor shot selection.

A depleted bench also cost Blair. Senior guard Quentin Snively was sidelined for undisclosed reasons after a great performance against Einstein in the season opener. The referees also called the game tightly, limiting the play of senior forward Issy Melton and Sampson. "We weren't always able to play the players we wanted," said DeStefano.

After Northwood's quick start, Blair settled into a patient offense once they managed to cross half-court. Near the end of the first quarter, the Blazers went on a 9-3 run that extended into the next period. Senior forward Rex Jarrett came off the bench to jumpstart the flustered Blazers, scoring on offense and blocking shots on defense.

A few minutes before the half, the Gladiators regained momentum on a 10-0 run courtesy of Blazer turnovers. Blair answered with a short jumper by senior guard Milton Colquehoun. A few moments, later he pick-pocketed a Gladiator guard and laid in a fast-break lay-up to cut Northwood's lead to 24-22. Northwood led by one at half.

The second half belonged to Colquehoun, who led the Blazers with 18 points. A 5-0 third quarter Gladiator run was held at bay after junior forward Michael McClain completed a three-point play. Colquehoun followed suit, driving to the basket and drawing the foul while flipping the ball in the basket.

Colquehoun continued to attack inside the paint to keep the Blazers close, but in the end thirteen missed free throws, an intense full-court press and two unforgiving refs contributed to the devastating loss.

As the Blazers will not meet Northwood again this season, the team is focused on their remaining games. "We have 17 more games, which means that much more practice," Colquehoun said after the game. "And that many more chances to win."