Last year, U-16 Washington Area Girls Soccer (WAGS) coach Ian Oliver presented his team, the D.C. Blast, with the opportunity to select a foreign locale to visit. Much to his surprise, the group of 14 to 16-year-old girls bypassed Big Ben and the Eiffel Tower for two weeks in South Africa, educating poverty-ridden girls their age about HIV and AIDS.

The team of mostly incoming juniors is made up of girls from the Washington, D.C. metropolitan area, including several Blazers. Juniors Molly Brune and Anna Rassman made the trip through Girls for Goals (G4G), a non-profit organization created by Oliver this year to facilitate cultural exchange and education through the medium of soccer, according to the G4G website. South Africa was the G4G 2007 destination, and educating teenage girls about HIV and AIDS was the objective. Traveling alongside the girls were nine of their D.C. Blast teammates, Oliver, G4G Life Skills Coach Jessi Cates-Bristol, G4G Project Photographer Alice Keeney and Head G4G Coach, 1999 World Cup Champion Tiffany Roberts. 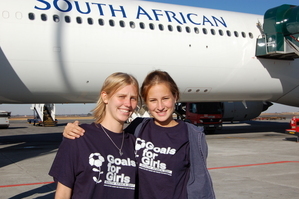 South Africa has one of the highest HIV/AIDS rates in the world. According to UNAIDS, 33.4 to 46 million people suffer from the disease worldwide, 21.6 to 27.4 of whom reside in sub-Saharan Africa. About 5.5 million people and 10.8% of the population over two years old living in South Africa are also living with HIV, according to the South Africa National HIV Survey in 2005.

The Academy for Educational Development, a non-profit organization dedicated to making various social changes in the world, employs Oliver in the field of HIV prevention. While he initially worked on the domestic front, in recent years he has worked internationally in numerous African countries including Ethiopia, Zambia, Libya and Cote d'Ivoire. Oliver's work led him to create Sports For Life (SFL), a non-profit that works in conjunction with another organization, Grassroots Soccer (GRS), to educate African children about HIV and AIDS while also hosting soccer clinics. "Even in the poorest places in the world," Oliver says, "people are playing soccer."

At first, both Oliver and G4G's partner companies questioned whether the girls would be mature enough to handle the emotional demands of such a trip. "Up until about two months before the trip, I was really nervous," Oliver says. "It's a really hard position to be in when you're sixteen years old to represent the United States."

However, Oliver soon found no reason to worry because the numerous team meetings detailing everything from what to pack to what to do if someone said they were HIV positive thoroughly prepared the team for what was to come. "From the first day we got there, I was like 'They got it,'" he says. "The maturity thing wasn't an issue at all."

The beginning of a journey

The G4G group visited several different areas of South Africa from June 24 to July 8, spending the first couple of days in the heavily Westernized Capetown.

Despite pre-trip reservations from some teammates about the quality of life in Africa, the girls were surprised to find that life in Capetown is not much different from home. "Since South Africa is pretty nice we stayed in nice places," junior Molly Brune says. "Our trip wasn't really rough and tough."

After their stay Capetown, in which the girls visited the U.S. Embassy and went on an educational tour, they moved on to Port Elizabeth, where they resided for the majority of the trip. The 11 girls of the D.C. Blast teamed up with 11 South African girls between the ages of 13 and 16 to participate in the Grassroots Soccer curriculum. From 9 a.m. to 2 p.m., the girls learned about HIV and AIDS through games. In "fact or nonsense," teams of four girls, two Americans and two South Africans, tested their knowledge about the diseases by answering questions like "Is HIV the same as AIDS?" for points. After the daily instruction every day, the girls ran a soccer clinic or relaxed and went to the beach.

Members of the D.C. Blast also led discussions about HIV and AIDS, though at first the South African girls were not used to sharing their thoughts. "Mostly what we ended up doing was helping the girls speak out more because they're really quiet there," Brune says. "We encouraged them to raise their hands." 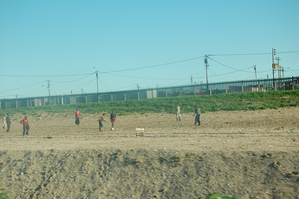 Photo: A group of children plays a pick-up soccer game in a township in Capetown.

Photo: A group of children plays a pick-up soccer game in a township in Capetown.

South Africa is home to eleven national languages, including English and Xhosa, a language incorporating tongue clicks commonly spoken by people in the villages where the D.C. Blast stayed. Most of the South African girls spoke English, though some better than others. "We went to a township where the schooling was not funded well so most of the younger kids did not speak English," junior Anna Rassman says. But she says the language barrier did not prevent her from connecting with the South African girls, as they were all teenage girls.

After Port Elizabeth was a brief visit to Richmond, which Brune describes as more poverty-ridden than the other towns. However, she says that the race-fueled violence plaguing Capetown and Port Elizabeth was absent from the township community of Richmond.

Rassman remembers coming to the township and being bombarded by the smiling, giggling faces of South African children who enjoyed playing with the D.C. Blast. "They're like all kids," she says, "they just want someone to care about them."

Brune reminisces about some South African girls from Richmond with whom the D.C. Blast had attended a dance. A few days after the dance, Brune and her teammates were serving residents of Richmond a free lunch. Despite qualifying for the free meals themselves, all the South African girls were interested in doing was assisting the Blast with their assembly line food preparation. Brune was astounded by the fact that although the girls had precious little, all they wanted to do was help others.

Rassman was likewise surprised at the selflessness that seems to be common in South Africa. "It's amazing how people who have nothing find joy in the smallest things," she says.

An infectious desire to spread knowledge

Oliver says that G4G has accomplished a lot in only its first year and is looking forward to the future of the group. "What year two will look like, to be honest, I don't know and that's really exciting," he says. "Maybe it will be another team going to Africa or maybe more importantly, a team of South African girls will come here."

While fun, the South Africa trip was also sobering, according to Rassman. "I just realized how much we all have," she says gratefully. Rassman wants to stay active in G4G and says that the D.C. Blast is going to help another WAGS team fundraise to go to South Africa next summer.

Brune says she was shocked at how much racial tension still exists between the indigenous South Africans and the Afrikaners of Dutch origin. On the plane ride home, Brune struck up a conversation with the Afrikaner she was seated next to. He inquired about Brune's feelings towards George Bush and when she asked him if he liked the South African president, Thabo Mbeki, he said no because Mbeki is black. "'Yeah, I'm rascist, that's how lots of people I know feel,'" Brune recalls him saying. "It really made me realize how much more needs to be done in South Africa." Both Brune and Rassman profess a strong interest in returning someday if possible.

A desire to return and to help is what Oliver expected and hoped would happen with his team. "One thing that Africa will do is infect you in a good way," he says. You'll really feel that you'll have to go back and I hope [the girls] do."