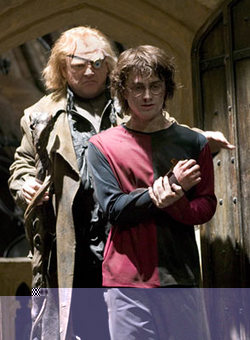 The movie stays mostly loyal to the book as it follows our awkward hero Harry (Daniel Radcliffe), the even more awkward Ron (Rupert Grint) and the bombshell hottie Hermione (Emma Watson) through the conflicting challenges of wizardry and adolescence. "Goblet of Fire" is the first Potter movie to effectively grapple with the issues of adolescence, as asking out a girl poses greater peril than battling a dragon. The various fights between best friends Harry and Ron are relatable, although occasionally marred by trite dialogue or wooden delivery.

The film's beginning still feels rushed, so much so that what should be a frighteningly gripping Death Eaters attack on the Quidditch World Cup is too shortchanged to really stick. The movie does not bother with exposition, working on the assumption of the viewer's background knowledge of the Potter saga. But whereas the entire first movie felt like a dry account, "Goblet of Fire" moves past the uneven beginning to slow down and properly tell the story.

The acting in this movie significantly improves from the previous films because the youngest cast members have finally learned how to act. Radcliffe finally reflects the complexities of his character, struggling to be normal but thrusting into distinction. Watson can be motherly and sisterly, intelligent and pubescent, mature and hormonal, dorky and pretty, creating a complex character. Michael Gambon upgrades his portrayal of Albus Dumbledore, but still lacks the wise grandfather quality perfected by the late Richard Harris in the first two movies. Also, Pretty-boy Cedric Diggory (Robert Pattinson) is someone who viewers can simultaneously root for and resent.

The most surprising performance comes from Ralph Fiennes ("The Constant Gardener," "Schindler's List") as Voldemort, who brings creepiness and venom to the Dark Lord despite the constraints of a peculiar mask, which crosses a human embryo with a baboon. Despite Fiennes' skilled performance, You-Know-Who will always be greater in mystique than in man, Voldemort is inescapably less horrifying on the screen than in the book.

Therein lies the inherent flaw of screen adaptations, which inevitably cause frustration when they conflict with the viewer's own perception of the book. Despite its magnificent special effects, the movie's visual interpretation can be unsatisfying. The caricaturish descriptions of Rowling's characters do not translate as well as the live actors' dramatization of her imaginative prose. Dumbledore's wisdom is inhibited by his onscreen eccentricity, Mad-Eye Moody is almost too weird to take seriously and the Death Eaters oddly resemble dark Klansmen in black pointed hoods and skeletal masks. Each wizardry school also bears its own amusing stereotype: the French belles of Beauxbatons, the rugged Vikings of Durmstrang, and the preppy Brits of Hogwarts. The cartoonish characters sometimes interrupt the movie's coherence but do serve to supply occasional and well-placed humorous notes.

Even for audience members who have repeatedly devoured each Potter book, the new movie brings a fresh interpretation that even manages to give each plot twist a wisp of suspense and surprise. After its disappointing predecessors, "Harry Potter and the Goblet of Fire" feels like the first movie worthy of supplementing the magical books.

"Harry Potter and the Goblet of Fire" (157 minutes) is rated PG-13 for sequences of fantasy violence and frightening images.