God grew tired, but the camera loved them

In the early 1980s, war tore through Southern Sudan. A death warrant was placed on every boy in the region, prompting an exodus of 27,000. "It was as if, as people say, in the last day in the Bible, people will be judged," says one such boy, John Dau. "I thought God grew tired of us and he wanted to finish us."

Fresh out of Sundance, where it won the Jury and Audience Awards, the documentary "God Grew Tired of Us," directed by Christopher Quinn, is the sweet and stirring story of the boys driven from their homeland, and of many, including John, who were two decades later sent to the US for a chance at a better life. 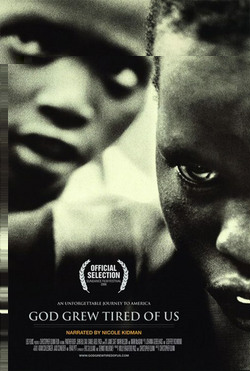 God Grew Tired of Us

Photo: "God Grew Tired of Us" studies the displacement of Sudanese citizens as a result of the genocide in Darfur. From thezreview.co.uk

Photo: "God Grew Tired of Us" studies the displacement of Sudanese citizens as a result of the genocide in Darfur. From thezreview.co.uk

After the conflict tears their villages apart, the boys walk 1,000 miles, first to Ethiopia and then to Kenya, losing 15,000 children to starvation, hyenas, lions, bombs and other circumstances along the way before finally ending up in the Kakuma Refugee Camp, where much of the film takes place.
One of the most gripping aspects of the film is the love between the "Lost Boys," a love strengthened by both their desperate predicament and their home. Kakuma could have become a "Lord of the Flies" situation, as many young boys are orphaned and thrown together to govern themselves. Instead, they come to love each other and gain a whole new sense of compassion.

The film opens as papers are put up on a communal bulletin board listing the names of the Lost Boys offered the ultimate opportunity: a life in the US. Among the lucky recipients are the film's three protagonists: John, Daniel and Panther, who are sent to the Pennsylvania and New York to find work and new lives for themselves.

The new life is harder than they think. Shortly after bidding their teary-eyed brothers goodbye, the new Sudanese-Americans find themselves tripping and jumping over escalators and perplexed by airline food. The airline food is not as good as the food in Kakuma, says one, shortly after downing a pocket of what appears to be mayonnaise and a square of butter which he says "tastes like soap." It is these moments that give a sense of light-heartedness to the movie and its sad subjects. At times, the tall, muscular Sudanese seem like naïve children, fascinated by potato chips, trashcans and Santa Claus.

Cinematography brings out both the beauty and the pain, and above all, the color, in the lives of its protagonists. The opening scenes show a beautiful and seldom-seen southern Sudan — very different from the Sudan known to American minds as a bleak, genocide-ravaged landscape. Instead, it opens with the Sudan that was, a country filled with luscious trees overlooking an evergreen Nile River where children swim and canoes float placidly upon the water. This world comes to a close as the Southern Sudanese, the losers of a decades-long civil war, are all but eliminated by their Arab compatriots.

Blues and greens turn to grays and browns as the children flee in slow motion. They soon turn into a long line of muted colors. A seemingly endless procession of stick-thin boys slowly creeps across the screen, dull-colored and wide-eyed. They cross the desert, without food and water, where they are forced to rely on mud and urine for hydration. The children cried, says a refugee, but no tears came. Instead, flies came to sit on their eyelids and mouths.

The music switches between underscoring scenes with single sobbing notes and celebrating them with the vibrant shrills, cries and dancing feet of the Lost Boys at Kakuma. At times, the music is perhaps too simple, particularly for the saddest scenes. However, it is still the moving scenes make the lack of music irrelevant.

Though most hyped for it's A-list presence (Brad Pitt is listed as an executive producer and Nicole Kidman narrates), aside from funding, the film is in no way overshadowed by their influence. Kidman's narration is negligible, as seamless transitions and strong interviewees all but eliminate the role of narrator.

Ultimately, it is the presence of love and hope that make this movie a winner. Surveys have recently shown that Africans are more optimistic than people of any other continent. "God Grew Tired of Us" presents no challenge to this theory. Hope is what keeps every Lost Boy going. And each of the three in the US feels a duty to improve the plights of his people, through attending conferences for the Lost Boys, holding marches and sending what little money they make back home for the betterment of Kakuma. "God does not create a very tall person for nothing," says John. "I have a duty to do."

"God Grew Tired of Us" (86 minutes, E Street Cinema) is rated PG for thematic elements and some disturbing images.