Times have changed since 1999 when Dirk Nowitzki was the only foreign basketball player drafted in the top fifteen to have not played for a team in the National Collegiate Athletic Association (NCAA). Nowitzki was drafted behind Michael Olowakandi, Raef LaFrentz, and Robert Traylor, who all turned out to be complete busts. However, last Thursday, after the Sacramento Kings drafted Bismack Biyombo, a Congolese power forward for the Spanish team Fuenlabrada, it was clear that the National Basketball Association (NBA) is going global. 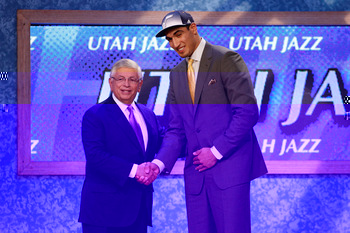 Photo: Enes Kanter was the third overall pick in the 2011 NBA Draft.

Photo: Enes Kanter was the third overall pick in the 2011 NBA Draft.

Biyombo was the seventh overall pick in the 2011 NBA Draft, at which point foreign-born draftees outnumbered previously selected players born in the United States four to three. Enes Kanter of Turkey, Jonas Valanciunas of Lithuania and Jan Vesely from the Czech Republic were selected with the third, fifth and sixth picks respectively, joining Biyombo in the first draft featuring more than two top ten international picks that had not played college basketball in the United States.

After the draft ended, a huge question arose in the minds of many fans across the country. Why are so many teams now risking their lottery picks on young, foreign talent? After all, European players often struggle to adjust to the NBA's physical play. Those who already play professional basketball have high buyout prices and are often still under contract. (Remember Ricky Rubio, who was drafted by the Timberwolves in 2009 and still hasn't played in a single NBA game?) And most importantly, teams cannot scout these foreign players as well as those already in the U.S.

Perhaps the lack of scouting is the reason behind the shift. When teams draft young players, they want potential; they want raw talent and intelligence that they can use to mold their draft pick into an elite player. The more often teams see players workout, the more weaknesses they notice and the more hesitant they are to draft them. Let's go back to Rubio. Minnesota drafted the teen sensation in 2009, when everyone thought he would be the next great point guard. However, just two seasons later, Rubio is still in Europe, averaging just 6.5 points and 3.5 assists per game. Had the T-Wolves waited to see whether all the hype around him was deserved, I'm guessing they would've spent their fifth-overall pick elsewhere.

Compare this to former University of Connecticut point guard Kemba Walker, who was the Big East Conference Most Valuable Player and the NCAA Tournament Most Outstanding Player. The talented guard fell to the ninth pick in this year's draft. Walker has played three years of college basketball, more than any player, American or international, drafted before him. You'd think that this experience would be an attraction, but apparently, it's a turn-off. The Cavaliers would evidently rather have Kyrie Irving, a point guard who has played a grand total of eleven games for Duke, and it's Walker that we're not sure is ready to start in the NBA?

There's no doubt that the success of the Dirk Nowitzkis, Yao Mings and Pao Gasols of the NBA have added to the willingness of general managers to draft foreign players – some of them are certainly genuine lottery picks. However, it seems that NBA teams are a little too eager to risk their franchises around players who they clearly don't know much about.

I don't know about you, but I wish that instead of bringing in Oleksiy Pecherov from Ukraine for their 2006 pick, the Wizards had just looked to the University of Kentucky - from which current Boston Celtics All-Star guard Rajon Rondo was drafted three picks later.