Going on the record: classrooms on camera

The controversy around recording Zoom lessons.

As schools settle into a routine of online classes, the requirement for teachers to record lessons has caused controversy among teachers, parents, and students over privacy rights.

The county informed teachers that when recording live classes, they should try to capture the lesson material while minimizing the display of students to the greatest extent possible, thus both protecting student privacy and increasing the accessibility of class content.

"There are some good reasons to be recording video conferences,” Linnette Attai, the author of two books discussing the protection of student data privacy, says. She notes the importance for students with accessibility accommodations, students who missed class, and students who want to review lessons to be able to access class recordings.

MCPS has attempted to address these privacy concerns, stating that recordings are automatically deleted after 72 hours and are only accessible to students enrolled in the class through an MCPS login.

Junior Edwige Ghembesalu echoes privacy concerns but prefers the videos to be permanently available. “If the 72 hours system wasn’t there, I definitely would review a bunch of them before a test,” she says. “But since they’re gone after 72 hours, I don’t think I’ll be using [the Zoom recordings]."

For junior Ethan Shoham, recorded sessions are not an issue because only students in the class can access them. “Sharing a recording with the class doesn’t violate a student’s privacy. Presumably, the class can see the student anyways,” Shoham says.

In the interest of increasing student privacy, MCPS guidelines give parents and guardians the option to opt their child out of participating in Zoom classes while it is being recorded through a form found on ParentVue. In practice, many Blair teachers allow students to self-select but prefer that their students turn on their camera due to the difficulty of effectively teaching without student feedback. One such teacher is John Kaluta, a technology teacher at Blair. “It really makes me more comfortable if I see everybody’s face,” he says. “If I have gallery view on and I’m looking, I can see people nod their head, for instance, which would make it a little, teeny bit more like the classroom.”

The main difference between students opting out by choice and parents filling out the official form is that with the former, teachers can still call on students to participate while the class is being recorded.

While teachers may prefer students to have their cameras on, the Family Education Rights and Privacy Act (FERPA) protects the privacy of student education records across the country. However, the interpretation of whether a class recording is a part of a student’s education record remains up to the school district.

According to a 2019 study by Student Privacy Matters, these three laws often do not address specific metrics like transparency, oversight, and enforcement, which the study used to evaluate the comprehensiveness of statewide student privacy protection. This study, in which lower ranks mean more comprehensive laws, ranked Maryland as No. 31 out of the 50 states and Washington, D.C. based on seven privacy-related categories. 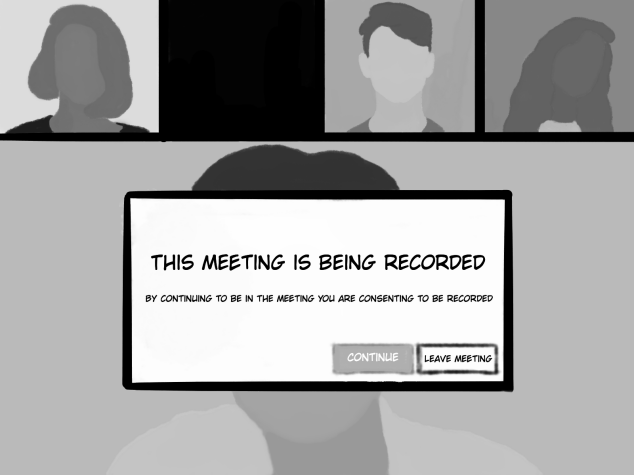 Going on the record: classrooms on camera

Brad Shear, an MCPS parent and attorney who has worked numerous privacy cases, opted his children out of participating or turning on their cameras during Zoom classes this fall because he believes that students’ homes should remain private. Shear brings up instances in other districts where students were suspended because of their home environments. “Kids are getting suspended and being threatened with arrest based upon things that the teachers take a look at inside of the student’s homes,” he says. According to Shear, in one case, a 12-year-old Black student with ADHD was suspended for a week and now has a mark on his permanent record because he was holding a toy gun.

On a more local scale, some students, like freshman Alex Feingold-Black, think that recording Zoom sessions inhibits student participation. “When teachers record Zoom classes, the classes do become a lot more awkward and silent because no one wants to share,” he says.

According to Leigh Tinsley, an English teacher at Blair, recording Zoom sessions can also be distracting for students and teachers. “Being on camera is just a hard thing for people to deal with and the adolescent age group is very critical of how you [look] on camera,” she says. Tinsley furthers that the added layer of self-consciousness when a Zoom session is being recorded decreases students’ desire to answer questions or contribute to class discussion.

Tinsley also believes that recording Zoom classes is an unnecessary step. “We are already doing what we need to do to make sure those kids can access the material, and I don’t think any teacher––if we know what is going on with the student––would be unwilling to help that child gain access to the material,” she says.

The controversy comes down to balancing the best way to teach students while maintaining privacy. MCPS has offered various provisions to ensure student privacy, including a 72-hour limit for accessing recordings, password encryption, opt-out forms, the choice to turn cameras off, and two recording options for teachers. As the school year progresses, Attai believes MCPS and the community will continue to revise these policies to further protect students while providing an engaging learning environment. “We just need to give the time and space for everyone to put their creative energies to that problem,” she says.

Virtual zoom backgrounds are one potential solution to student privacy issues. The feature attempts to replace the user’s background and protect student privacy while on camera. However, they are not without controversy.

MCPS banned the use of virtual backgrounds this summer, citing an effort to maintain technological equity among students. The county provided tens of thousands of Chromebooks to students for use during virtual learning.These devices do not have the required processing power for virtual backgrounds, so only students using devices not supplied by the school system would be able to access this feature.

MCPS cited concerns about inappropriate content being displayed on student backgrounds. Peter Cevenini, the Associate Superintendent of Technology and Innovation, said during the Board of Education’s business meeting on Aug. 25 that MCPS has worked to “balance safety and security” with community needs. For this reason, in addition to restrictions on virtual Zoom backgrounds, students are required to have their real names on their displays. “The system also prohibits students from changing their usernames to avoid ‘anonymous use,’” according to an article in the Bethesda Beat.

Technological limitations also make keeping a stable image of the speaker superimposed over the background difficult, which can be districting for teachers and students.

Brad Shear, an MCPS parent and attorney who has worked numerous privacy cases, testified before the Board of Education about virtual backgrounds during their business meeting on Oct. 6. In an interview with Silver Chips, Shear explained why he believes the MCPS’ decision to restrict virtual backgrounds for students but not teachers is unfair. “Montgomery County is blocking students from being able to use a digital background. However, on the flip side they are allowing teachers to use the digital background,” Shear says. “That is discriminatory against the students, and it’s basically saying to students that they are second class citizens in Montgomery County when they are actually the customers.”