Rebecca Bross, 17, has two gold medals weighing heavily on her shoulders. The elite gymnast is a product of the World Olympic Gymnastics Academy (WOGA) in Dallas, Texas, the same gym that trained Carly Patterson and Nastia Liukin, 2004 and 2008 Olympic gold-winners respectively. After Patterson's and Liukin's wins, Bross is expected to carry on the tradition. 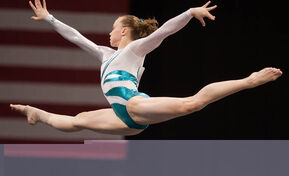 Photo: Rebecca Bross competes on balance beam during the first day of the Visa National Championships on Aug. 12. Photo courtesy of USA Gymnastics and Diane Bidermann.

To add even more pressure, the WOGA head coach is Valeri Liukin, father to Nastia and silver medalist himself. Having coached two Olympians to gold he is now breeding his third gymnast to complete what sports experts have dubbed the Olympic "threepeat."

For those who are unclear on the technicalities, gymnastics can be called both an individual and team sport; though a team score is used in international events, individual standings make the most impression. Competition is divided between four apparatuses: uneven bars, balance beam, floor exercise and vault. Medals are awarded for the top three gymnasts on each event and for the All-Around competition - winning this is the ultimate goal for all gymnasts.

The 2012 Olympic Games will take place from July 27 to Aug. 12 in London, England. Although the final team will not be decided and announced until the completion of the Olympic Trials in the weeks leading up to the Games, several candidates have emerged as leaders of the Woman's National Team. Bross has made a strong showing by sweeping up medal after medal, placing first in All-Around at this year's Visa National Championships, Pacific Rim Championships and Tyson American Cup.

But standing in the way of Bross are National Team members Mattie Larson and Bridget Sloan. Sloan placed first in the 2009 World Championships, while Larson won the 2010 Covergirl Classic and placed second at the Visa Championships. Both gymnasts hold an edge over Bross: they have each competed in the Olympic trials before and Sloan went to Beijing in 2008. Experience is key in any sport and Bross is at a disadvantage because she lacks familiarity with international competitions.

There are also other factors. Larson, whose performances are more graceful and artistic, is a strong competitor on floor and beam because her European-style acrobatics are well received by foreign judges. There is a solidness to Sloan's gymnastics and she consistently sticks her landings, even if she does not create long, elegant lines with her body.

Then there is Bross, a power gymnast that relies solely on strength and agility without any sense of fluidity. While her routines are flawless they lack a certain passion that is achieved by the others. Her skills, which are extremely difficult and have high start values, place should Bross above her competition. Yet she executes her twists and spins with only technical proficiency, wearing a stony expression that is off-putting to the judges.

Regardless, Bross has tremendous talent on every apparatus and her level of difficulty and unwavering focus are undeniable. The coming years will prove crucial for Bross' gymnastic career if she intends to bring the WOGA a third consecutive gold medal. For the moment, dreams of Olympic gold are simply that: dreams. The next two years are still wide open for speculation, and any rising gymnastic star that loses her balance will find she has a long way to fall.