The foreign language academic support classroom is perpetually jam-packed during lunch as students filter in and out, looking for a teacher to help them. The environment seems chaotic – that is, until the commanding presence of Spanish teacher Dora Gonzalez enters the room. She hands each student the material that they need in a businesslike fashion. Then, noticing a former student complaining about his work, she addresses the classroom jocularly as her smile belies her seriousness. "If he had taken a class with me, he would have experienced a lot of fun," she says. 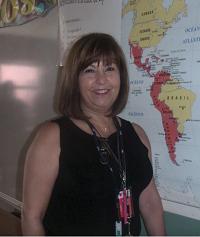 Photo: Gonzalez dispels the rumor that she is intimidating with a wide smile.

Photo: Gonzalez dispels the rumor that she is intimidating with a wide smile. Photo courtesy of Sonalee Rau.

Instantly, all tension in the room melts away. Gonzalez's personality has that effect on students – it motivates them while putting them at ease. She has had plenty of experience implementing her self-described "student-centered" teaching style, having worked at Blair since 1996. Her plans to become a teacher were laid long before that, though. In sixth grade, she had a chance to teach younger students at her school, an experience that contributed to her eventual choice of profession. "I was mesmerized when I taught them," she says. Growing up in Puerto Rico, Gonzalez's parents, who were both teachers, also influenced her and led her to gain a love for the Spanish language that has stayed with her to this day.

Despite a lifelong dream of teaching, Gonzalez is a product of many unique experiences and past professions. Upon first coming to America, she moved to the Midwest. "I was the only brunette," she reminisces with a laugh, but she also acknowledges that "people are very warm and inclusive" there. Gonzalez initially worked as a Pixie Girl at JC Penney's, photographing babies in the store. Following this, she worked at her husband's chiropractic office for 13 years as an administrative assistant before coming to Blair, a decision she has never regretted.

Gonzalez particularly enjoys the diversity among students and teachers at Blair, an aspect of the school that she comes into contact with often as a sponsor of Silver Chips' Spanish Page and the Spanish Honor Society. "It's encompassed by a group of kids who enjoy the language," she says of the latter club, calling it a "cute mix of [non-Hispanic] and Hispanic" students who participate in community service and other events related to the cultures of Spanish-speaking countries.

She has also forged fast friendships with many Blair teachers, including a small group in the foreign language department who have been known to complete each other's sentences. "Our philosophy of teaching Spanish is the same," explains Gonzalez. "It's like a sisterhood. It goes outside of Blair." She takes part in many of her favorite hobbies with these coworkers. "I love to watch movies, sew, do yoga - I love to read in Spanish. I like historical novels," she says.

Gonzalez's students have the most influence on her. She maintains that she feels rewarded whenever she sees a struggling student succeed. "Teaching high school keeps me in touch with young minds. You guys are the present," she reflects. "I was very touched by a student I had many years ago who was very involved in promoting Spanish-speaking culture. All my students leave something. I learn from them."

Here in the academic support classroom, one can tell that she has had a profound impact on her students as well, although she does not acknowledge it. "I think I am going to teach for a while. I don't think I will 'retire into the sunset.' [But] I would love to be unnoticed, fly under the radar," she remarks. Yet the young minds she teaches notice her, and the truth about Gonzalez's success as a teacher is revealed through their words. "Usted me cambió," a former student comments to her as he turns in his test. "You changed me."