"Good Luck Chuck” is not so lucky

Jessica Alba and Dane Cook are two good-looking individuals. Exceptionally good-looking, in fact, which is probably the sole reason these two were paired to star in a new comedy from first time director Mark Helfrich. After all, everyone loves it when two hotties fall in love. However, the makers of "Good Luck Chuck" were under the false impression that this premise alone, accompanied with tons of bare breasts and ill-conceived potty jokes, would be enough substance for a successful romantic-comedy. Sure enough, the end result is vulgar, sexist and painful to watch.

Charlie Logan's (Dane Cook) story starts with a game of spin-the-bottle at his first co-ed party. When an unfortunate spin lands his kissing buddy to be the weird Goth girl, Charlie shows his obvious disgust and rejects her. Heart-broken, the girl places a curse on him: every woman he sleeps with from then on will wed the next man they meet. Sure enough, the present-day Charlie, a successful dentist and quite the ladies man, whizzes through relationships, not noticing the pattern of subsequent weddings amongst his ex-girlfriends. However, someone does, and spreads the word; soon enough, hoards of women are lining up for a date with "good luck" Chuck. 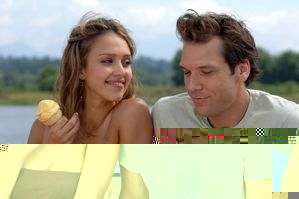 Photo: Charlie and Cam out on a date, falling steadily in love.

Photo: Charlie and Cam out on a date, falling steadily in love.


Heartily encouraged by his long time best friend Stu (Dan Fogler), Charlie decides to take advantage of his predicament. All is well for Charlie until he meets Cam Wexler (Jessica Alba), a klutzy but gorgeous penguin specialist. Charlie is irrevocably smitten, and realizes what he has been missing all along. But as more and more of Charlie's sexual partners get married, Charlie begins to worry that the curse is, indeed, real. Before it's too late, Chuck must figure out how to break the curse before losing Cam to another guy forever.

The plot of "Chuck" is fairly original, as far as romantic-comedies go, and with a better script, it could have passed for a decent comedy. However, the movie relied far too much on crass gags and gratuitous nudity. Movies such as this one are risky investments that can only be pulled off by clever visionaries such as Judd Apatow and Kevin Smith, who can skillfully make a ridiculously disgusting joke absolutely hilarious. In "Chuck," however, most of the jokes appear as gross, pathetic attempts at humor.

Furthermore, Fogler's role as the horrifyingly inappropriate breast reconstruction surgeon who really loves his job is absolutely despicable. There is nothing at all amusing about an obnoxious, sexually-repressed fat man practically begging for laughs. His performance, with the added message that women are so desperate to find true love that they will sleep with a complete stranger, turns an already humorless movie into something downright nauseating.

The only pleasing performance comes from Alba, who is able to portray her character as likable Cam with effortless humor. Cook, a better actor than comedian – but not by much – is also somewhat digestible during his screen time with Alba, as their chemistry is one of the few enjoyable things during the movie. However, the cute scenes between Charlie and Cam are far from saving this trite film from rotting like the cavity-ridden teeth of a woman desperate for a steamy appointment with the dreamy dentist Chuck.

"Good Luck Chuck" is very similar to Dane Cook's stand-up routines. On the surface, it looks mildly entertaining. But the end result is just a pretty boy leaping about and making outrageous comments while providing no substance or original thought. Some are easily amused by such frivolity and crudeness, but others will find it not worthy of their money and attention.

"Good Luck Chuck" is rated R for sequences of strong sexual content including crude dialogue, nudity, language and some drug use and is now playing in all theaters.