If this film-noir is hell, then what comes after?

Suppose you're a director and your name is Steven Soderbergh. You've directed "Oceans" 11 and 12, "Traffic" and "Erin Brockovich." You've proven your prowess, and are bestowed with complete artistic license on an independent movie starring three bodacious heavyweights: George Clooney, 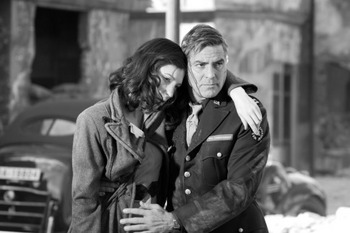 Photo: Clooney and Blanchett make out in Berlin in Soderbergh's "The Good German."

Photo: Clooney and Blanchett make out in Berlin in Soderbergh's "The Good German."

You have the talent, cinematography and screenplay — and you flop. You shoot for avant-garde black-and-white 1940's film noir, but you try too hard and forget the basics — like plot construction. Unfortunately, "The Good German" cannot be sustained on artsy-fartsy camera work alone, when the plot is rife with inconsistencies.

It is under this premise, and the upcoming Potsdam Conference, that American New Republic journalist Jake Geismer (George Clooney) arrives in Berlin. In addition to hard-nosed reporting, Geismer hopes to rekindle an old fling with a gorgeous German, Lena Brandt (Cate Blanchett), who he had a rendezvous with before the war.

But Lena Brandt has other plans. She is too busy playing the town, and sleeping around, with the hope of getting out of Germany.

Her husband, Emil Brandt (Christian Oliver), a former SS secretary, is hiding in a Berlin sewer. She visits him every few days providing food and affection. You almost feel sorry for man and wife, until you remember that he is a Nazi.

Meanwhile, Lena is also having an affair with a cute American Army motor pool driver and smuggler, Patrick Tully (Tobey Maguire). Tully is trying to secure her passage out of Berlin. The two have mild chemistry, especially when Tully punches Lena in the stomach, she cringes in agony, and he repents.

Tully is assigned to chauffeur Geismer around Berlin, but the two get into a brawl after Geismer realizes that Tully is in a relationship with Lena, his former mistress.

Kudos to Lena for juggling with the hearts of three brawny men. Just fifteen minutes into the film, she is entangled in a menage-a-quatre.

In this film, Clooney should have taken some romance lessons from Blanchett in making members of the opposite sex swoon. He is missing his classic and endearing scampish bravado, and instead plays a serious and love-struck Geismer — suggesting that a pretty-faced reporter in uniform doesn't make for a solid performance by itself. Geismer makes several overtures to the opposite sex through proclamations like, "That was just like Lena. She always kept me off balance." No, Clooney, No. Your attempt at solicitousness does not become you. The girls miss your usual stuck up, self-assured narcissism.

In contrast, Lena is the only one with enough compunction to manipulate and deceive, giving her character the greatest dimension in the film. After all, she dupes three men, armored only with a seductive German accent and bright red lips. She exudes 40's femme-fatale class — the damsel with a brain, and an agenda.

It is the lackluster, predictable and slightly incoherent plot that makes the film so mediocre. Obvious plot twists and an ending that is straight out of Casablanca, produce numerous cliches that make viewers cringe. There is nothing more unfulfilling than foreseeing every twist 20 minutes before it occurs.

In a moment of frustration, Tully yells, "Cry me a river. Everyone in this town has a hard luck story." In tinsel town, Soderbergh had his own taste of hard luck, or maybe just poor judgment, in producing this overdone melodrama.

"The Good German" (105 minutes, selected release) is rated R for language, violence and some sexual content.

Laura Mirviss. Laura Mirviss is far more excited than she should be about being on the Chips staff this year. She loves field hockey, lacrosse, The New Yorker, and Ben and Jerry's. When trying to keep things in perspective, Laura likes to remember the words of Ferris … More »