Hurricane Katrina swept through Louisiana two weeks ago, leaving roughly 80 percent of the city underwater and thousands of helpless residents stranded on their rooftops waiting for government rescue. Where was the government? Instead of responding immediately with all available resources, the government was hog-tied while congressmen and lawyers in Washington D.C. argued for days over the legitimacy of relief efforts. Although rescue workers eventually were able to evacuate and transport the majority of the residents to safety, the government response took its toll, resulting in unnecessary sickness and death. The Federal Emergency Management Agency (FEMA), the agency in charge of handling disaster relief efforts, should look back on Hurricane Katrina as a reminder to never hesitate or ignore the threats of a natural disaster in the future. 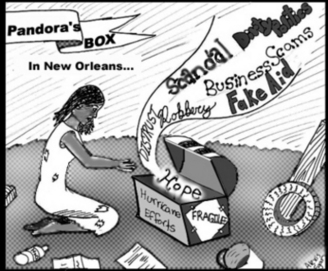 Photo:
The government was initially confused when reports of Hurricane Katrina's damage arrived in Washington D.C. For days, FEMA stalled, failing to initiate massive relief efforts. There are a few explanations behind the inexcusable slow response to the disaster. The Department of Homeland Security (DHS), which includes FEMA, is too focused on preparing for more unlikely attacks of biochemical terrorism than natural disasters. FEMA faltered under former head Michael Brown, who lacked any leading ability in face of these disastrous events.

President Bush appointed Brown as the head of FEMA, along with two other top FEMA officials, in 2003. Coincidently, all three had political ties to the President Bush's campaign and possessed no experience with disaster control, according to The Washington Post. Only a few days after Hurricane Katrina's impact, President Bush removed Brown from overseeing relief efforts in New Orleans. Yesterday, Brown resigned, which is the most responsible thing he could have done to prevent future problems in dealing with national emergencies. His resignation is a move in the right direction to improve the nation's response plan, although many problems in the plan still exist.

Another inexcusable problem with the government's disaster response is that the Bush administration was well aware of the imminent danger hurricanes posed to New Orleans. Situated below sea level, the Gulf Coast wetlands are rapidly disappearing, augmenting the threat of floods. Months earlier, President Bush had cut funding for improving deteriorating levees by two thirds. These levees play a critical role in protecting the city by preventing massive flooding. However, because of the Bush administration's preoccupation with the Iraqi war, the old levee system was the city's only defenses against rising waters.

Although only a few residents stayed behind in New Orleans, the government still has much to do. Medical disasters caused by waterborne diseases and crowded shelters will affect the hundreds of citizens and require the government's undivided attention. Aside from health problems, New Orleans must now focus on pumping out the diseased water out and resurrecting the city. The government is now faced with a daunting and costly task, with estimates reaching as high as $200 billion, almost rivaling the $300 billion required for the War in Iraq.

Regardless of how ineffectively FEMA initially handled the situation the government's slow response has been inexcusable. While Hurricane Katrina destroyed homes and ravaged New Orleans, it also exposed important problems with the nation's disaster response plans. The government, especially FEMA, has no place for inexperienced or hesitant leading personnel in future emergencies.