Graduation to be held at DAR Constitution Hall

In an automated phone call sent Friday evening, Principal Darryl Williams announced that Blair will hold graduation at the Daughters of the Revolution (DAR) Constitution Hall in Washington, D.C. on June 4 at 10:00 a.m. 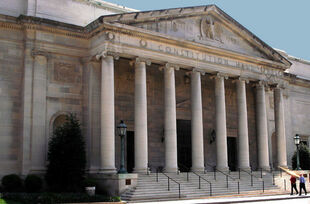 The decision follows months of deliberation over potential graduating venues, including Cole Field House and the Comcast Center at the University of Maryland College Park (UMCP), where Blair has held graduations since 2007. Parent Teacher Student Association (PTSA) co-President Peter Lafen explained that that administration discarded these locations due to limited availability and high rental costs. "In the end, the University of Maryland was not willing to offer Cole Field House on a date or at a price so we could graduate," he said.

Cole Field House, a large gym that has 12,000 stadium-style seats, would cost Blair $10,000. The rental fee for the 17,950-seat Comcast Center could be reduced to $29,000 if Blair shared the facility with two other schools, but no such arrangements materialized.

Lafen estimated that graduating at DAR will cost Blair $6,000 beyond the $5,000 Montgomery County Public Schools (MCPS) allocates to reduce the burden of graduation expenses. Based on these figures, he predicted that seniors will have to contribute about $10 in senior dues in addition to money collected for cap and gowns. Lafen warned, however, that MCPS Superintendent Jerry Weast has proposed budget cuts that could further increase senior dues. "Just in the last couple of days, Mr. Williams was given notice that MCPS may cut graduation funding by $1,600," he said.

The administration and PTSA also plan to address concerns that the Washington, D.C. venue is not large enough to accommodate the family and friends of more than 600 graduating seniors. DAR, a small concert hall with 3,702 theater-style seats, has the capacity to hold only four guests per senior. "We have to work on a ticket exchange program," Lafen said.

In addition to establishing a ticket exchange program, the administration is currently negotiating with DAR officials for more affordable parking and scheduling bus transportation to the facility. "I'm in the process now of securing transportation to transport all students, teachers and administrators to graduation," Senior Class Faculty Liaison Danyel Hartfield said.

Although Blair has committed to graduating at DAR this year, Lafen wants future senior classes to consider venues with larger seating capacities. "I'm going to encourage the class parent liaisons to meet and discuss what the younger classes want to do," he said. "The decision would be between deciding to commit to fundraising to go to Comcast or making the best of DAR."