Graduation to be held June 3

Comcast Center to house the ceremony

Blair's 2009 senior graduation ceremony will take place June 3 at 9:00 a.m. in the Comcast Center at the University of Maryland. The event is expected to last approximately two hours, leaving time for the subsequent commencements of Sherwood and Magruder seniors, according to Special Education teacher and senior class sponsor Danyel Hartfield, who is organizing the event. Blair will be closed for the day. 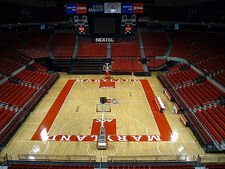 Photo: The Comcast Center seats 17,950 people, providing more than enough room for the friends and family of this year's graduating seniors.Picture courtesy of the University of Maryland.

Photo: The Comcast Center seats 17,950 people, providing more than enough room for the friends and family of this year's graduating seniors.Picture courtesy of the University of Maryland.

Around 600 seniors will be receiving diplomas at the ceremony, but inadequate grades, unfulfilled Student Service Learning (SSL) hours or unpaid obligations may prevent some from graduating. The figure is not definitive, however, as final grades are still unavailable for screening, according to Hartfield.

The speaker for this year's ceremony is Dr. Daniel Cohen, a 1982 Blair graduate and lecturer from the School of Industrial and Labor Relations at Cornell University. His enthusiasm to return to Blair and request to speak a couple of years ago set him apart from other possible guests. "He was very excited about coming back," Hartfield said.

The Comcast Center, also the location of last year's ceremony, accommodates 17,950 people, according to the University of Maryland website. Each senior is allotted 10 tickets to distribute among friends and family guests. Hartfield acknowledged that the size of the center was the deciding factor in choosing the location for this year's graduation. "It's large enough to hold the number of students we have and their parents," she said. The previous commencement location, Jericho House of Praise, seated only 10,000, but was free, according to Blair Cluster Representative Jeanne Philbin. Pressure from Superintendent Dr. Jerry Weast and conservative groups caused Blair to move the ceremony to the secular Comcast Center last year, although Weast promised to foot the bill for the space, she said. Each year, Blair's contribution to the cost of using the Comcast Center has increased; this year the sum has reached $3,000 - $12,000 less than was originally expected, according to Philbin.

Hartfield is enthusiastic about what awaits the graduating seniors in the future. "They're good kids," she said. "They're going to do well."