Graduation to be held Wednesday

An expected 692 Blazers to graduate from Comcast Center ceremony

The senior class of 2008 will have their graduation reception this Wednesday at the Comcast Center, located on the University of Maryland College Park campus. The reception is set to begin at 9 a.m. and is expected to end before noon, according to ESOL teacher Danyel Hartfield, who organized the event. 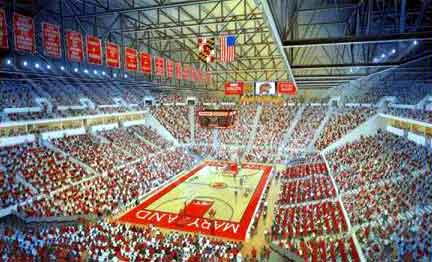 Photo: An illustration of the Comcast Center, where this year's graduation is to be held. Photo courtesy of the University of Maryland College Park.

Photo: An illustration of the Comcast Center, where this year's graduation is to be held. Photo courtesy of the University of Maryland College Park.

This year's guest speaker is David Edward Perry, a Blair graduate of the class of 1989. Perry, who resides in Hollywood, is currently an actor and comedian working for Sony Pictures. Senior class officers, county Board of Education members and Principal Darryl Williams will also give speeches commemorating the class of 2008.

The ceremony will honor approximately 95 percent of this year's seniors. "There may be more, as we are still waiting for final grades to come in," said Hartfield.

Each student has been allotted ten tickets for guests. The Comcast Center was selected due to its ability to house all of the graduating Blazers and their friends and family members, according to Hartfield. Last year the venue was changed from Jericho City of Praise, a Christian church, to the Comcast Center after much controversy. The debate swirled around the separation of church and state, especially the church's religious icons depicted behind a glass window and inscriptions stating, "Jesus is the Lord." The Comcast Center has no religious icons depicted in its facilities.

Principal Darryl Williams praised the graduating seniors. "They have been the most talented – be it in athletics, academics, community service, capstone – group of young people I have ever met," said Williams. "I expect to hear great things about the class of 2008."

Before the seniors graduate, many will participate in "Beach Week," informally scheduled the week leading up to graduation. With the drinking and drugs associated with the unofficial tradition, the likelihood of police citations run high. Williams warned that students who get citations may not take part in the graduation ceremony. "They do in fact run a risk of not participating," he said. However, he stated that he does not believe these citations will actually prevent any Blazers from graduating.