Somewhere between the half-baked grannies, karate-chopping monkeys and scenes of nana getting intimate with someone who could be her grandson, executive producer Adam Sandler must have wondered what exactly he created. 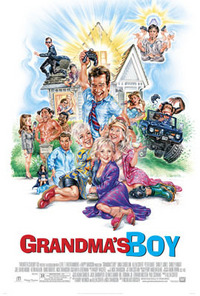 "Grandma's Boy," the first stoner film of the New Year, is a disappointing waste of 96 minutes and $9.25. Behind the bad jokes, crass humor and stupidity of the film lies a fundamental flaw: watching bad actors pretend to be smacked is not funny.

However, to make up for the lack of humor in this area of the film, Goossen infuses the rest of the movie's measly attempt at a plot with "male" humor, which is, you know, fart jokes and stuff. Bur Goossen is mistaken, assuming that a resort to the traditional male strongholds of humor will, like magic, make a movie funny. In "Grandma's Boy," the hackneyed flatulence jokes, weed jokes, fat jokes, grandma jokes etc, are just plain trite.

The story revolves around the life of 35-year-old Alex (Allen Covert), a middle-aged pothead who spends half the day working as a video game tester and half the day smoking marijuana and sleeping in peaceful bliss. Alex is suddenly thrust into a conundrum when a series of misfortunes renders him homeless. As a last resort, he decides to move in with his granny and her two elderly roommates. What follows is the debauchery of the three innocent old ladies and a witless storyline that is so anticlimactic it makes "Chicken Little" look like a cliffhanger.

The rest of the movie focuses on Alex's struggle to win the affection of his boss and love interest (E.R's Linda Cardellini), to produce a report on a new video game with three of his nerdy friends - it's just as interesting as it sounds - and to curse, drink and smoke as much as the MPAA will allow him to.

Adam Sandler has starred and produced films that have just as bad a story line and genre as adolescent humor. Usually, mediocre films like these are made respectable by some comic genius who either stars or co-stars. Unfortunately, this mediocre film boasts a cast of mediocre B-lists, most of whom have shown much better work in previous Sandler films.

The film's cast of Sandler's cronies, includes SNL buddies Rob Schneider, Kevin Nealon, David Spade and sidekick Allen Covert, who lifelessly plays the films title character. The oddball cast is stiff and lacks chemistry, with the exception of a few newcomers to the stage. The notables include Alex's boss J.P (Joel David Moore), the Neo-wannabe game designer who wears black leather and talks like a robot when he's "nervous." Comedian Nick Swarson, one of a few tenderfoots in the film, is also mildly amusing in this cast of has-beens. Swarson, who co-wrote the script, plays Alex's closest friend Jeff, a twenty-something who gets driven to work by mommy, who looks forward to lunch break and especially to what's inside his lunchbox, displaying the same anticipation as a nine year old does.

"Grandma's Boy" dishonors Adam Sandler's "Happy Madison" fine production label, making audiences cringe at the thought of another Sandler-produced disaster that would again vaporize in a cloud of smoke.

"Grandma's Boy" (96 minutes) is rated R for pervasive drug use and language, strong crude and sexual humor and nudity