For years, personal technology has been prohibited in most classrooms and has been seen as a distraction from students' learning environment. So when Apple came out with the iPad, many saw potential for their use in education. Then, on Jan. 19, Apple announced their textbooks for the iPad. The iBooks 2 application was launched to support the volume of textbooks will feature books from major publishers, as well as an application that allows someone to easily write and format a textbook directly for the iPad. They will feature interactive textbooks that will include graphics and videos. 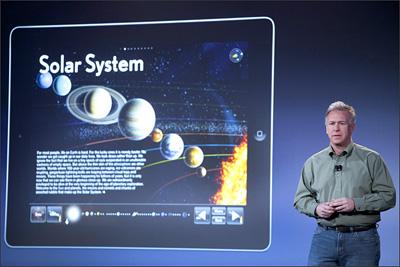 Of course, like every other innovation, it has its advantages and disadvantages. Some see it as an efficient way of using textbooks instead of having to drag around heavy textbooks that are not cheap to replace, while others see it only as a slight advantage to the few who have access to it.

As any high schooler knows, most textbooks are a pain to carry and a pain to read. Schools obviously can't afford get new ones every year and the books end up being outdated. Apple's new tool would allow a student to not only get the most up to date textbooks for much cheaper, but also to carry around multiple books at once without breaking their backs. It creates more options for different types of learning with videos, interactive diagrams, photos and more.

All of these innovations are great, but there's a catch: you need an iPad to use them. With iPads starting at $500, the average student can't afford one. It gives a greater advantage to wealthier students and schools that can afford to provide them, but sets everyone else further behind them. Another issue is not with the textbooks themselves but with the additional use of technology.

How dependent does Apple want us to be on their products? If the program gets introduced to elementary schoolers as it did in Apple's video, it would teach young kids to depend on technology at too early of an age.

And what if a student were to break their iPad? They would either lose all their textbooks or be unable to study for a period of time. It might be an innovative and useful technology for some, but it's hard to believe that this technology would become widespread enough for iPad textbooks to become the norm.

The idea of everyone having a touch screen tablet with the newest and best textbooks seems like a great idea that would benefit America's educational system but it also seems like a scene out of a futuristic movie. In reality, the expectation of extending virtual textbooks to all students is still an idealistic future.