True, the Red Sox and Yankees have on-edge, feisty fans but if you think they have a rivalry going, you ain't seen nothing yet. Compared to 'hooligan' soccer fans, all baseball fans are tame kitty cats. 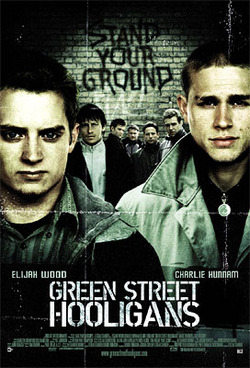 Photo:
"Hooligans" revolves around the Green Street Elite (G.S.E.), a "firm," similar to a gang, of West Ham United hooligan football (don't you dare call it soccer) fans so passionate about their team they use it as an excuse to fight rival fans. When Matt Buckner (Elijah Wood) leaves Harvard because of an erroneous cocaine charge, he finds himself with no place to go but England, where his sister Shannon (Claire Forlani) lives with her husband Steve Dunham (Marc Warren). With no agenda, he is befriended by Shannon's charismatic but shifty brother-in-law Pete Dunham (Charlie Hunnam), leader of the G.S.E. Buckner finds himself spending more and more time with the G.S.E., and begins to enjoy the sense of brotherhood and protection he feels in their presence. After leading the G.S.E. in a few small skirmishes, Pete leads the G.S.E. against their bitter rival "firm," Millwall in the climactic street fight. In an epic and unforgettable climax, a sad and unpredictable fate befalls Pete Dunham as the G.S.E crumbles.

Wood makes a great jump from Frodo the ring-bearer to Buckner the Harvard reject-turned hooligan. He is unusually well cast and, surprisingly, does not remind the audience of a hobbit every time he steps on the screen. The best performance however, is by Hunnam who electrifies the screen and keeps the audience on edge with his seething anger, penetrating stare and toughness that makes him seem like a smarter-than-average street thug. Hunnam proves that there is a method behind the madness of hooliganism: to keep a rep. He lives his life by the G.S.E. mantra and mindset that aggression is the most honorable way to handle conflict.

Towards the end of "Green Street Hooligans," Alexander strays from his previously flawless plot and character development and develops subplots that detract from the otherwise high-quality storyline. For instance, in an unnecessary plot twist, one of the G.S.E.'s finest members, Bover (Leo Gregory), feels disturbed by the presence of Buckner, a "yank," and decides to betray the G.S.E by telling their rival to ambush and attack the G.S.E., leading to disaster for the G.S.E. This harrowing experience drives Bover into deep depression, confusion and inner turmoil. Although interesting, this plot twist detracts from the overall message of the film and shifts the audience's focus from the story of Buckner, Pete Dunham and the G.S.E. to the internal struggle of a side character.

"Green Street Hooligans" provides insight into a world most Americans have no experience dealing with or even know anything about. Other than the occasional small misstep, "Hooligans" is successful in producing a worthwhile and entertaining film all football fans should see.

"Green Street Hooligans" (109 minutes) is rated R for brutal violence, pervasive language and some drug use.