Hit show in serious need of a shot of morality, humility and entertainment

Since its debut in 2005, "Grey's Anatomy" has continued to attract viewers with its scandalous plotlines – intern affairs and unusual medical cases, such as a woman pregnant with twins by two different fathers, seem to be part of the daily routine at Seattle Grace Hospital. But ever since this season's premiere, the show has been flailing with sagging plots and dying character chemistry. Especially after Thursday's episode – the first new one since the writers' strike – the show is in need of a lot more than adrenaline if it wants to be brought back to life. 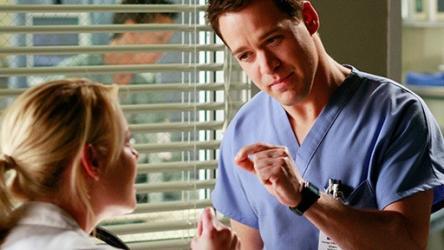 Recap of a train wreck

When the show left off on Jan. 10, golden couple Meredith (Ellen Pompeo) and Derek (Patrick Dempsey) finally decided to break up after four episodes of seesawing back and forth. This week's episode, aptly titled "Where the Wild Things Are," starts six weeks after the last episode as all the residents are embroiled in a questionable surgical competition. In an attempt to win a jeweled pager and have "dibs" on cases, the residents forego sleeping and even bathing to rack up the most points – given based on the difficulty of the surgery or task – and win.

Ultimately, Izzie (Katherine Heigl) is the biggest train wreck of the night. In an attempt to prove that she has instincts and is not going extinct, she orders a series of painful and expensive tests to find a "medical mystery," score 80 points and win the contest. In the end, Otis the patient (Cheech Marin) has nothing more than a minor flu — which is painfully obvious to everyone but Izzie throughout the episode. When Otis rightfully confronts Izzie for treating him like "a lab rat," she quickly utters a weak apology and runs away with her tail between her legs.

In typical tradition, Meredith starts the episode with a voiceover and muses on the difference between humans and more primitive animals. In the end, Meredith concludes that the major difference is that humans can think, but after this episode even that point is questionable.

Like animals, many characters on the show lack morality and ethics. Instead of reproaching Izzie or even giving her a lecture for her egregious actions, Chief of Staff Richard Webber (James Pickens Jr.) encourages her and tells her that she is a good doctor. Just as bad as Izzie's immoral and foolish quest to prove herself is Lexie's (Chyler Leigh) attempt to "nest." A Harvard Medical School graduate, Lexie resorts to stealing paintings, underpads (which serve to soak up patients' urine, but apparently can also double as a placemat) and even a patient's gift to a nurse to make her cockroach-infested apartment more homey and cheer up roommate and fellow intern George (T. R. Knight), who now feels lonely since his friends are too wrapped up in the race to pay any attention to him.

Laughter is the best medicine

Despite the missing chemistry, excitement and common sense in this episode, laughter was thankfully present. Without Addison (Kate Walsh), Derek's ex-wife and Mark's ex-girlfriend, Mark (Eric Dane) and Derek's friendship has returned with a renewed force. Mark, as debonair as ever, provides a bulk of the comic relief as the overly confident best friend.

Derek's current girlfriend, Rose (Lauren Stamile), is just as hilarious in her attempt to play it cool with Seattle Grace's resident "McDreamy." Though unsuccessful (blurting out "I love him" to Lexie), she brings a laughter and lightness to the show that has been painfully absent this season.

Just as important as the plot is the acting, and many of the award-winning cast members lacked their usual sparkle. Despite going to therapy and saving a man's life, Meredith (Pompeo) seems to have only one facial expression throughout the episode – a neutral and almost tired look. Other than the occasional moment, she seems to be on autopilot for most of the show.

On the other hand, Heigl is dramatic to the point of exasperation. Perhaps the writers were trying to make Izzie more humane with the plot, but Heigl's needy and shrill version of Izzie only alienates her. Izzie really is the perfect match for George, whose whiny portrayal by Knight is more tiring than usual.

Thankfully, gems like Wilson and Oh prove they can still act after the months-long hiatus. Wilson even manages to stay in character by looking menacing and forceful with a baby on her arm. Oh is as delightful as ever as the aggressive Christina, who will stop at nothing to get what she wants.

Though there were moments that reflect why millions of viewers tune in every week, "Grey's Anatomy" was sorely lacking crucial elements in its latest episode. Even the plot, usually entertaining and full of drama, was tiring and unoriginal due to the number of its similarities with the race for Chief of Staff in season three. If the show wants to retain its loyal viewers, it will need a huge shot of TLC.