The election grievance filed by former Student Member of the Board (SMOB) candidate junior Will Bucher was heard before a committee Monday in the MCPS Board of Education meeting room. Bucher called for a re-vote for the April 25 SMOB election, if one is feasible, or a split-SMOB title for the 2007-2008 school year, in which each student would serve half a term. He also requested that Moskowitz be formally reprimanded and that clarified election procedures be drafted for next year.

Bucher cited signed testimony from students at various MCPS schools alleging that a rumor, that Bucher was planning to sue students responsible for defamatory Facebook groups, was gaining momentum at their schools. 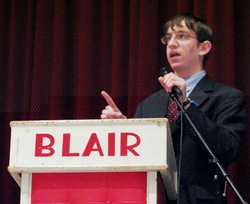 He also cited his victories in 24 of 38 MCPS middle schools, where students do not have Facebook accounts, and on 71.5 percent of absentee ballots, which were cast prior to many of the rumors' alleged perpetuations, as evidence that the election would have turned out differently had election protocol been followed and the Facebook groups not been created.

Moskowitz countered that he was not responsible for the online actions of others and that Bucher had neither shown real evidence against him nor presented any election protocol that Moskowitz violated. Moskowitz said after the hearing that he was confident that the committee would find in his favor.

Bucher said that posts on the cited Facebook groups accused him of molesting an intoxicated girl at a party and of being anti-Semitic and racist. Nick Wolf, a senior and creator of the Facebook group, "I'm not pro Ben Moskowitz, I'm anti-Will Bucher," testified that Moskowitz had no connection to or power over the content of the groups and said that had either Moskowitz or Bucher asked him to remove something, he would have.

Some evidence used by Bucher was presented to Moskowitz for the first time on Monday. Moskowitz denounced this as unfair, and the grievance committee chair, Seneca Valley senior Caroline Rodriguez, said it would be kept in mind.

The committee also heard complaints against MCPS Student Affairs director Karen Crawford, which was later dropped, and a complaint against an unnamed Cabin John Middle School SGA representative. The complaint against Crawford was originally filed on the grounds that she started the rumor of potential lawsuits by Bucher, but was dismissed after her brief testimony during Bucher's presentation time. The charge against the middle school student was also dropped.

Photo: Bucher's grievance was heard this Monday in the MCPS Board of Education meeting room.

Photo: Bucher's grievance was heard this Monday in the MCPS Board of Education meeting room.

Crawford testified that she received a letter regarding defamatory Internet groups signed by Bucher's lawyer, which Crawford advised Bucher not to disperse. She also stated that she was not aware that the contents of the letter were intended to be confidential. Her impression was that Bucher's mother simply wanted defamatory remarks off of the Internet.

Crawford said during a recess that an eventual complaint of this nature regarding Internet defamation was inevitable as a result of the growth of technology. "This was going to come sooner or later because we've reached a new age. It's something that we can't control, but we can put out more guidelines," she said. She saw the hearing as a potential opportunity to learn from and help future elections.

The hearing was held by an MCPS grievance committee comprised of four students led by Rodriguez and assembled at the beginning of the year. The committee ordinarily has five members, but the fifth member was dismissed earlier in the year.

Moskowitz, Bucher and Crawford delivered opening statements, after which they were each given an hour to present their cases, including testimony and cross-examination questions, but because the complaint against Crawford was dropped, she did not use her hour.

The grievance committee said it would reach a decision in the next 24 hours and will announce it in the next 48 hours.