Gunman in Tai Lam shooting sentenced to 50 years in prison

Hector Mauricio Hernandez, 21, was sentenced Thursday to 50 years in prison for his role in a shooting that killed Blair freshman Tai Lam and injured two others. 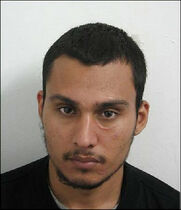 Photo: Hernandez, 21, was sentenced to 50 years in prison for the murder of Blair freshman Tai Lam. Picture courtesy of the Washington Post.

Photo: Hernandez, 21, was sentenced to 50 years in prison for the murder of Blair freshman Tai Lam. Picture courtesy of the Washington Post.

The Nov. 1 incident occurred on a Ride On bus following a verbal exchange between Lam and Hernandez, a documented member of violent street gang MS-13. As Hernandez left the bus, he turned and fired three rounds back inside, killing Lam and injuring two other teenagers. Though sentencing was originally scheduled for July 30, court documents indicate that the procedure was pushed back twice due to scheduling conflicts.

According to the Gazette, Hernandez was sentenced to 30 years in prison for one count of first-degree murder, as well as 10 years each for two counts of first-degree assault. However, according to court documents and Assistant State's Attorney Jeffrey Wennar, Hernandez was in fact sentenced for one count of second-degree murder.

Sentencing guidelines recommended a sentence of 15 - 45 years in prison, but the State's Attorneys Office asked for a higher sentence given the circumstances of the case. "We asked that they go above the guidelines," Wennar said. "[They] acceded to our request." Montgomery County Circuit Court Judge Michael D. Mason was quoted in the Gazette justifying the harsher sentence by factoring in the heinousness of Hernandez's crime. "You took a young boy's life," Mason said before handing down the sentence. "He was 14 years of age and nothing would suggest he did anything to contribute to or bring upon his own death."

During the hearing, Hernandez also received a five-year sentence for using a handgun in the commission of a crime of violence, which will run concurrently with his other sentences. Despite the fact that Hernandez was also charged with two additional counts of using a handgun in a violent crime, the State's Attorneys Office decided not to pursue additional charges. "We wouldn't get any greater sentence if we had gone forward on those two counts," explained Wennar. Hernandez pleaded guilty to these charges before Mason in May and will be eligible for parole in 25 years. Immigration and Customs Enforcement (ICE) has filed a detainer for Hernandez as well.

The two men who were with Hernandez on the night of the shooting were also found guilty for their roles in the incident. Gilmar Leonardo Romero, 20, pleaded guilty to accessory after the fact for second-degree murder while Mario Ernesto Milan-Canales, 30, pleaded guilty to hindrance and obstruction of a police officer. Both were sentenced to time served but ICE has filed detainers for them and they are currently facing deportation. "Both [accomplices] received sentences for credit for time served," Wennar said. "[They will be] released to ICE detainers."