Department of Health and Human Services out of vaccines 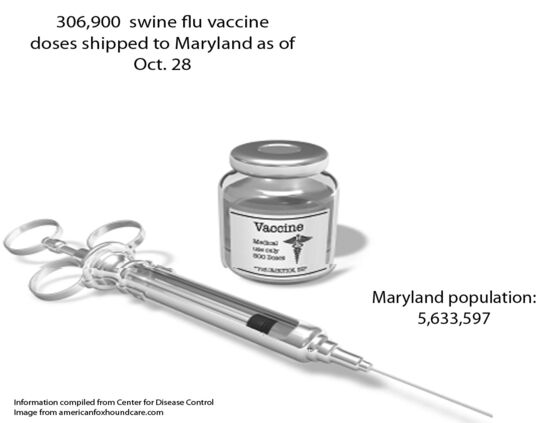 Photo:
The first clinic occurred as scheduled on Oct. 28 and the vaccines were given at Northwood, Northwest and Rockville from 4 - 8 p.m., according to Anderson who said that MCDHHS experienced mass shortages at the Oct. 28 clinic."We would have liked to have had several thousand [vaccines] at each clinic. We had one thousand at each clinic." Anderson said that they managed the crowds by giving out numbered tickets in order of arrival, asking those remaining to leave when vaccines ran out. Anderson said that the media had learned of the shortages leading thousands of people to rush to the clinics in the hopes of getting vaccinated. "There just wasn't enough supply to meet demand," she said.

Anderson blamed a manufacturing glitch for the vaccine shortage. As of Oct. 14, 130,700 doses of the vaccine had been shipped to Maryland. The Centers for Disease Control and Prevention (CDC) has distributed close to six million total doses nationwide. Anderson says that MCDHHS has not selected new dates on which to hold the clinics. "We will not schedule clinics until we have the vaccine in hand," she said.

The vaccines were offered to MCPS students, private school students and other children between the ages of 2 and 24, according to a letter from MCDHHS physician Ulder J. Tillman to MCPS parents and students.

MCDHHS planned to have the injectable vaccine as well as the nasal spray available for administration, though when the clinics opened, only the nasal spray was available, Tillman wrote. In addition, one cannot receive the H1N1 nasal spray within 28 days of having received the nasal vaccine spray for the seasonal flu, called FluMist. This, Anderson said, is because both nasal sprays contain live viruses that cannot be mixed together.

The vaccine is necessary for people ages 2 to 24, as well as other targeted groups, according to the CDC web site, as H1N1 is now widespread in 48 out of 50 states. The states that have not seen widespread cases of H1N1 are South Carolina and Hawaii.

As H1N1 makes its way around the country, Blair is taking precautions to ensure that as many students and staff members as possible stay flu-free.

According to school nurse Debra Bitonti, if students have a fever of 100 degrees or higher, they are sent home from school immediately.
Students must be picked up by their parents and are not allowed to take public transportation home. When they have been fever-free for 24 hours, they may return to classes, but only after having a consultation with Bitonti.

Bitonti said that the basic ways to prevent the spread of H1N1 are to stay home when one is sick and to be sure to keep basic hygiene needs in mind. "It's just too contagious," she said.

According to Bitonti, a handful of parents have called her to say that their child was confirmed as having H1N1. However, according to Bitonti, it can be difficult to tell whether one is infected with H1N1 or just the seasonal flu because a doctor will give a patient a swab test that can be used to diagnose any form of flu. Bitonti said that if one wants to see detailed results, their doctor has to send the tests to the state. Few people are inclined to do so, as it is an expensive process, according to Bitonti.

More information about H1N1 is provided at www.montgomeryschoolsmd.org/emergency/h1n1. Students and parents are encouraged to call the Flu Hotline at 240-777-4200 if they have any questions about H1N1 or seasonal influenza.

H1N1 was classified as a worldwide pandemic on June 11, 2009, according to the CDC. The United States has had the largest number of reported cases, though the CDC's web site notes that most US citizens with H1N1 have recovered despite not receiving medical attention. All 50 states have reported at least one case of H1N1, as have Washington, DC, Puerto Rico and the US Virgin Islands. The first US patient with H1N1 was diagnosed on April 15, 2009 after there was a mass outbreak in Mexico. The CDC has monitored the situation with other government agencies.