Had enough of Shopaholic fluff

Too many repetitive Confessions

Sophie Kinsella's Confessions of a Shopaholic has been named a New York Times Bestseller and has found its way into the hands of millions of adolescent and adult females, who so far, have done nothing but sing its praises.

The protagonist of the novel, Becky Bloomwood, is a fresh, young financial journalist who works in the downtown section of London. She shares a nice flat with her friend Suze and owns more clothes and accessories than she could ever wear. But she has one tiny problem that's putting a damper on her sunshine- she's in debt. Big time. No matter how hard she tries, Becky just can't seem to stop shopping. Meanwhile, the cute tops from Ally Smith and that fabulous scarf by Denny and George are starting to add up to thousands of pounds more than Becky can afford. And just as we, the readers, are biting our nails in suspense, waiting to see if Becky can save herself from spiraling downward into the world of Wal-Mart and thrift stores, Kinsella eludes conclusion and plot twist by just positioning Becky in hundreds of different shops in London and allowing her to torment herself. Confessions of a Shopaholic, while it has its witty moments, loses its flavor after about 80 pages when Becky's shopping fiascoes all start sounding the same. 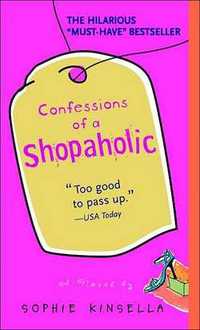 confessions of a shopaholic

Kinsella tries to build a likable character in Becky by causing her to recognize her fault and to attempt to fix it. Kinsella makes it appear as though Becky really does want to get over her shopping addiction but is unable to quit after relying on material goods for so many years. As a result, the excuses and ploys that Becky uses to try to save money end up making her seem superficial and selfish. When Becky's efforts fail, she resorts to putting "a little something” on her VISA to cheer herself up.

Becky first tries out her dad's advice to cut back on spending. She tries making her own cheese sandwiches and bringing coffee to work in a flask instead of stopping at Lucio's for the usual cappuccino and chocolate muffin, upon suggestion of a recent purchase, David Barton's Controlling Your Cash. But instead of reducing her spending by 50 percent, like Barton's book says, Becky finds all the loopholes and ends up spending more money than usual, by becoming more and more desperate for excuses to shop.

Becky eventually realizes that it's too hard to change her lifestyle so she looks for an alternative source of income. But after Becky blows £300 on Fine Frames, a scam that turns into an impossible mess of bent wire and ripped fabric, and gets fired after only one Saturday afternoon at a clothing retail store, she resorts to a less respectable money-making technique.

Becky begins pursuing Suze's Scottish cousin Tarquin, whom she never really liked until after she saw him listed in Harper's and Queen's hundred richest bachelors of the year. She begins making plans to marry him and spend all his money before they even go on their first date. And when it comes time for the date, Becky makes herself out to be a classical-music-loving, horseback-rider who is completely disillusioned by other girls' interests in shopping. Though the date backfires, Becky does show a glimmer of integrity when she turns down Tarquin's offer of £5,000 as a donation to her phony orchestra project in Mozambique, although accepting it would have erased her debt.

However, Becky's ploys to avoid her surmounting VISA bills and endless letters from Endwich Bank become tiresome after your read 14 letters from each company, and learn how Becky refuses to deal with them- by stuffing them in a drawer. It's also frustrating to wait so long for Becky to put her seemingly only talent of shopping to good use. In addition, Kinsella only provides the readers with one other subplot, Becky's love life, which is extremely predictable.

If you want a fun but light read, look into the first 100 pages of Confessions of a Shopaholic and then skip right to the last five pages to get to the juicy parts. What's in between are 500 fluffy sweaters, 16 purses, 9 pounds of face lotion, assorted candles and four pairs of little black shoes.

Confessions of a Shopaholic is available for $6.99 at area bookstores. Other titles by Sophie Kinsella include Shopaholic Takes Manhattan and Shopaholic Ties the Knot.