John Haigh is a typical Blazer: he plays soccer constantly, loves the outdoors, wears American Eagle clothes and enjoys hanging out with his friends and jamming to alternative rock music. He could be just a typical teenager – which is why it is easy to forget that he's a teacher.

Haigh's passion for his students transcends shared tastes in clothes and music, though. The Anatomy and Physiology and Research Projects educator says that his favorite part of the school day is "teaching" and "being in the classroom." 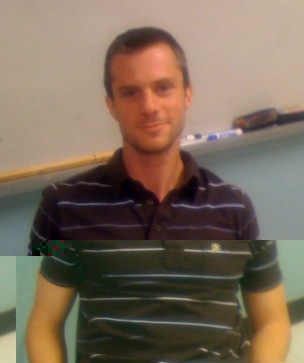 Photo: Haigh is relaxed at the front of the classroom.

Photo: Haigh is relaxed at the front of the classroom.

Haigh's enthusiasm can be traced back to his childhood. A lively kid, he played many sports and participated in boy scouts. "I was pretty active," he recalls. His mom was a school principal and his dad worked in the Education Bureau of the State Department. "I'm sure that [my mom and dad's professions] affected something," he says.

But he thinks what truly inspired him to teach was his work as a summer camp counselor in high school and college. Haigh believes the experience gave him insight into working with kids and "was a foundation for going into education."

After graduating as the valedictorian of Barrie Day School in Rockville, he went to Western Maryland College, now McDaniel College, but did not initially want to major in education. "I was interested in the medical fields," Haigh recalls. "I wanted to be a dentist." But, after realizing the amount of schooling required for medicine, he decided to become a teacher. "I did not want to be in school that long," he says. "I also really wanted to work with kids."

He started working at Blair in 1999 and has loved it ever since. He chose to teach high school specifically to be around teenagers. "I relate better with high school students," he remarks. "Plus, small children scare me."

He says Blair is an "easy place to work" and enjoys the "professional freedom" given to teachers. The latter makes teaching Anatomy and Physiology particularly enjoyable, he says. "It's nice because there's not a county final and I can develop the curriculum as I see fit."

That is the same reason why he enjoys teaching Research, a new class at Blair in which "students learn about research methods and do what they want," he explains. In the class, students pick a project that they would like to work on and spend the year researching and completing it. Inaugural topics included social science, forensics, botany and biodiesel. "Research is new to me," he says. "But in the future, I suspect it will be my favorite…I can tweak it as I please."

In his free time, Haigh coaches two soccer teams- a club team and Springbrook High School's varsity soccer team. He says he also enjoys hanging out with fellow Blair science teacher Charlie Demma. "I have friends here [at Blair]," he says. "We hang out and do things," including camping, snowboarding, mountain biking, rock climbing, golf and traveling.

Haigh's active and youthful nature helps him connect with his students. "He's like a kid," senior Marteki Martey says. Haigh describes two types of teachers, ones who enjoy the subject that they teach and ones who love to work with students. He places himself in the latter category. "I'm here to work with kids," he says. "And that's something I really enjoy doing."