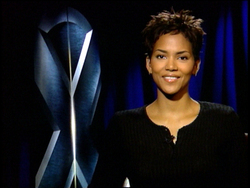 Halle Berry, who was named after the department store Halle Brothers, was born in Cleveland, Ohio, on Aug. 14, 1968. Her father left her family when Berry was just four years old, so she and her sister, Heidi, were raised by their mother, Judith, in a one-parent household. Later, the family moved into a suburban area dominated by Caucasians. In the new neighborhood, children started teasing Berry and her sister because of their skin color. Determined to overcome the racial issue, Berry became more involved in school as a cheerleader, Prom Queen and member of the National Honors Society.

Berry started her modeling career when her boyfriend entered her into a pageant. She was named Miss Ohio and even continued to the Miss World competition. Although she did not win the Miss World title, Berry received enough money to attend Cuyahoga Community College in her hometown of Cleveland. While there, Berry studied broadcast journalism, but she did not complete the course. Instead, she moved to Chicago to study film and later moved to Manhattan to land an acting job on the TV comedy series "Living Dolls."

The first movie in which she acted was titled "Jungle Fever," a film where she portrayed a crack addict. Her talent as actress expanded as she tried a variety of roles in several different genres. In 1999, Berry won a Golden Globe Award for best actress in "Introducing Dorothy Dandridge," a TV movie about the first African-American who was nominated for an Academy Award. In 1996, she divorced her husband of three years and found solace in humanitarian work. The Harvard foundation honored Berry with an award for her work in intercultural and race relations.

Even though Berry has diabetes and lost 80 percent of her hearing in the right ear due to an abusive boyfriend, the young actress has continued to act and has recently starred in "Swordfish," "Monster's Ball," "Die Another Day" and "Cat Woman." She won an Oscar for her role in "Monster's Ball" in 2002 and became the first black woman in film history to win in the best actress category.