Halloween on the silver screen

In the spirit of mischief and mayhem, SCO has watched and ranked three classic Halloween scary movies for spook-o-meter status. Most of them inspired lucrative Halloween franchises but all of them provide suspense, thrills and of course horror. So grab some candy corn, loosen up, invite some friends over and lock the door - these movies are sure to cause a fright. 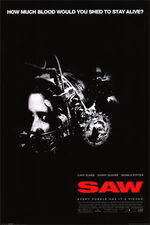 In a nutshell: "Saw" is the tale of a serial killer who puts people in terrifying, deadly situations. The killer, nicknamed the Jigsaw Killer for his calling card in which he cuts out a piece of his victim's flesh in the shape of a puzzle piece, forces his victims to commit acts of torture and extreme violence (either on themselves or someone else) while he watches from a secret hiding place. "Saw" introduces the audience to the killer and focuses on initial victims.

The first "Saw" sparked a Halloween phenomenon. Since 2004, a new "Saw" movie has been released every year in the weeks leading up to Halloween (we're now on "Saw VI"). The movie also inspired a genre of gore flicks, proving it's lasting impression on the American public. The characters have changed but the plot stays consistent. Year after year, audiences fervently flock to see the next installment of one of the biggest Halloween franchises ever.

Ava says: I'll admit, I didn't think I was going to be able to keep my eyes open during "Saw." The scary, suspenseful movies I can handle, but it's gory movies that really bring out the wimp in me. So I watched this movie in the company of other people, in my basement, with the lights on, in the morning. Not exactly the best setting for watching a horror movie, but nonetheless I was riveted by the film's plot, which is creative, original and keeps you enthralled. Director James Wan uses a thrilling blend of suspense and mystery to keep audiences hooked. Violence is woven into the film, but you get the feeling that it's purposeful and not needless. The scariest part of this movie is imagining the psychological and physical pain Saw's victims endure, though action sequences and a mind-blowing ending didn't hurt the movie's scare-factor either. "Saw" is the perfect Halloween scary movie.

Halloween (1978):
In a nutshell: This movie is the origin of the infamous Michael Myers, the father of sadists. After killing his first victim, his sister, the six-year-old Michael Myers is sent to Smith's Grove Sanitarium under the care of psychiatrist Sam Loomis. Fifteen years later, he returns to his hometown ready to kill again.

Mandy says: "Halloween" is definitely the king of teenage slasher films, birthing an entire subcategory of the horror genre. Killers Jason and Freddy Kruger, now household names, drew inspiration from the original Myers. Not surprisingly, a movie that made such a deep impression on American culture produced many remakes and sequels: Halloween II (1981), Halloween 4: The Return of Michael Myers (1988), Halloween H20: 20 Years Later (1998), Halloween (2007) and Halloween II (2009).

Myers's white mask achieved immortality through "Halloween". Thirty years later, teens are still discussing the killer. The best aspect of "Halloween" is its simplicity and novelty. Serial killers on the silver screen at the time were a relatively new concept and director John Carpenter skillfully played up the tension. The actual murder scenes were short and nowhere near as gory as the ones in recent years, but the most terrifying moments were the scenes leading up to the killings. I'll forever remember the "Halloween" theme song that plays whenever an important scene is about to happen. The bloodcurdling plink, plink of piano keys is still playing in my head.

The scariest thing happened when I watched "Halloween." The weather was atrocious the weekend I watched the film and the rain was literally in sync with the tense moments in the movie. I couldn't believe my luck that weekend! The downpour intensified the creepy factor. The rain would pound on the windows and the thunder would ring. In hindsight, "Halloween" is not nearly as scary as most current horror movies. Nevertheless, I kept looking behind me to check for Michael Myers's empty eyes. 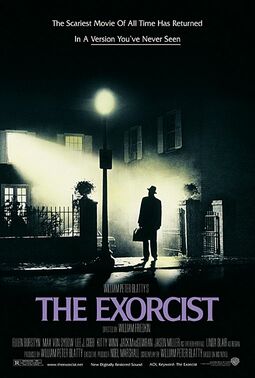 In a nutshell: As a 12 year-old-girl, Regan becomes possessed by Satan himself after using an Ouija Board. Her mother, Chris MacNeil, is in hysterics as she tries to stop Regan's seizures and strange behavior. After visiting numerous doctors and psychologists, Chris turns to exorcists.

Mandy says: "The Exorcist" is crowned the scariest movie of all time; it was the first horror movie nominated for Best Picture at the Academy Awards and went on to win two Oscars for Best Sound and Best Screenplay. There have been numerous prequels and sequels: Exorcist II: The Heretic (1977), The Exorcist III (1990), Exorcist: The Beginning (2004) and Dominion: Prequel to the Exorcist (2005).

Overall, the film was eerie for me, due to the religious undercurrents and references in the film. As a strong Protestant Christian, this film really affected me as I really believe in the themes and ideas behind the movie. Director William Blatty mixed crude language and vulgar scenes with references to God, I felt really uncomfortable throughout the film. To top it off, there were too many shots of Regan's incredibly distorted face, each of which made me cringe. Honestly, I did more than that; I screamed like a little girl and hid under my blanket every single time. Even thinking about her face now sends shivers down my spine. "The Exorcist" has extraordinary merit because it does not rely purely upon this imagery, or upon ostentatious special effects. The director relied on passionate acting, the gradual build up of tension and a truly creative plot. This innocent girl is possessed by the most evil thing that ever existed; this twisted concept makes this film perfect for Halloween.

The Nightmare on Elm Street (1984):
In a nutshell: Introducing the infamous Freddie Kruger! "The Nightmare on Elm Street" is the movie in which the feared killer makes his debut. "Fred Kruger," as he is called in the film, is a presumed dead serial killer who terrorizes teens in their nightmares, only to then kill them in reality. Oh, and he oozes green slimy things (as opposed to blood) and has blades instead of fingers on one hand.

This movie was a part of the successful teenage-slasher genre. Director Wes Craven created the character Freddie Kruger and directed the second, third and fourth sequels of "A Nightmare on Elm Street." The original movie also spawned more recent flicks like "Freddie vs. Jason" (2003) and conjured one of the most recognizable Halloween figures.

Ava says: Let's be honest, slasher movies from the 80s aren't that horrifying. First of all, everyone in the movie runs at a maddeningly slow pace and when people are getting killed, characters don't seem to have the sense to call the cops. Or call for help at all, for that matter. Secondly, who doesn't enjoy making fun of the way teens acted and dressed in the 80s? Despite the comedic aspect of the movie, "A Nightmare on Elm Street" is a fun, scary movie to watch. It created a classic Halloween killer and does have some elements of suspense that may get audiences anxious. Because of its accidentally-humorous tone as well as elements typical of an early - slasher movie, "A Nightmare on Elm Street" will forever be a Halloween staple.

In a nutshell: There really is no structured plot to "Scary Movie." The working title of the film was "Last Summer I Screamed Because Halloween Fell on Friday the 13th." "Scary Movie," which parodies classic horror movies, is about a group of six teenagers who are being stalked by a serial killer.

"Scary Movie" was a silly farce meant to be taken lightly. The movie was intentionally over the top and crude. Though this was a comedy, I was actually spooked during some scenes, including the mysterious phone calls from the serial killer. Although it has much less substance than any other film on this list, I would still consider this movie a classic. This movie set up a respectable franchise, because people genuinely enjoy watching Friedberg-Seltzer parodies. I would definitely recommend watching this movie in the middle of a Halloween scary movie marathon for comedic relief.

The Nightmare Before Christmas (1993):
In a nutshell: This Tim Burton flick is set in Halloween Town, a place devoted to all things frightening that is responsible for putting on Halloween. When Jack Skellington, the Pumpkin King of Halloween Town, becomes bored of scaring people, he decides to tackle Christmas instead. He kidnaps "Sandy Claws" and takes his place on Christmas Eve, forgoing Halloween for a year and causing chaos on Christmas.

Though this film wasn't a popular box-office hit, it still stands among some of the more famous Halloween movies. Of course, Tim Burton's animation is spectacular, and the creative flick brought about a popular Halloween costume as well: Jack Skellington can be seen roaming the streets on Oct. 31 every year.

Ava says: "The Nightmare Before Christmas" invites audiences into a world where it's Halloween everyday. Ghosts, ghouls, vampires and mad scientists are commoners in Halloween Town, and though the movie isn't that terrifying, its cool animation and eerie soundtrack envelop the senses in Halloween. The way in which the film explores the holiday makes it so captivating. The film represents all kinds of supposed Halloween creatures and has life-like animation that shows the most grotesque of figures. This fun, Tim Burton creation is just plain, Halloween-spirited fun.