Hand in the sand

Every vacation when he heads to the beach, Magnet teacher Robert Donaldson takes along a swimsuit, towel and one extra special item: a steak knife. 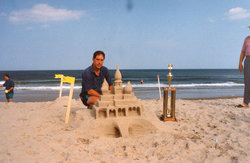 The knife, with its blunt tip, is not for steak or any sinister purpose, but to use in his hobby of building castles and other elaborate creations from sand. Under the hot summer sun, Donaldson works tirelessly to add painstaking detail to his towering structures as other beach-goers lie back and soak up the rays.

So far, Donaldson has created replicas of the Smithsonian castle, the Taj Mahal and St. Basil's Basilica, among others. Not all of his sand structures are famous buildings; for his each of his grandchildren's birthdays, he has turned their names into letters of sand.

Donaldson has built his structures up and down the Atlantic coasts over the last 40 years, from the shores of Aruba to local Ocean City, where he won first place in a sand castle competition 15 years ago. While Ocean City sand is "acceptable," his favorite location is the island of St. Martin, where the sand is ideal for castle-making.

"This sand is very fine grained and each grain is plate-shaped rather than cubic," Donaldson says. "I think this [shape] works better because there is more surface area over which the surface tension of the water can act." This additional capacity for water, he explains, helps to hold the grains together to make towers, columns and spires.

On his trip to St. Martin this spring break, Donaldson created a model of the Eiffel Tower. He attempted to replicate the structure as accurately as possible, including the four legs that support the needle-like tower. Unfortunately, the process of hollowing out the base caused the structure to collapse, returning hours of work back to a pile of sand.

Many of Donaldson's structures, like the Eiffel Tower, are scaled constructions of actual buildings. For inspiration, he consults students in his classes or browses the Internet for "interesting structures."

"I especially enjoy carving out belfries in tall towers," he says. "I haven't yet had much luck with the actual bells."

While Donaldson creates the castles mostly for his own and his family's enjoyment, the sand structures also draw the attention of fellow vacationers. On one visit to Aruba, for example, his 3-D letters spelling out "Aruba" caused at least 100 people to stop and stare – many even paused to take pictures next to the sculpture.

His creations draw people out of their normally isolated state on the beach, and lets Donaldson have a chance to meet and get to know the cosmopolitan crowd that makes up his usual haunts. Meeting such a variety of people breaks up what could otherwise be around four long hours of sand carving. Donaldson even advises his single friends that it can be a great way to meet girls.

"Many of the swimmers and sunbathers on the beach stop by to talk about the progress of the castles and to take pictures," he says. "It doesn't take a great deal of imagination to see how this could lead to an invitation to dinner."

For aspiring sand castle builders, Donaldson offers a few tips: Fine sand makes the best building material, and the sand must be kept wet. It's always good, he says, to recruit a few helpers to help lug around that heavy, wet sand.

Recruiting curious young children can prove an effective way to keep them from destroying the castle. "The most demoralizing problem is that little kids seem hard-wired to want to jump on sand castles with both feet," he says.

For his next vacation, Donaldson and his family are heading to the Outer Banks, where he will work on creating different parts of Neuschwanstein, a famous castle built by "mad" King Ludwig II of Germany. This castle, with its numerous towers, turrets and spires, served as inspiration for Walt Disney's Sleeping Beauty castle.

Click below to see an illustrated diagram of Mr. Donaldson's castle-building suggestions.

Jessica Cutler. Jessica Cutler is an energetic girl practicing for her intended career as a neuropsychiatrist on her unsuspecting classmates. She enjoys tennis, crosswords, Panera and exploring the Metro system. Also, she's developed a recent affinity for betta fish, and is the proud owner of Robert L. … More »