Big things are happening in DC. The Nationals are in first place in the tough National League (NL) East, their marketing department has brought in "#Natitude" amidst the "Take Back the Park" series with the Phillies and super prospect Bryce Harper is finally here.

There is no doubt that the Nationals have the talent to win games, but they are only beginning to bring in fans. The marketing department launched the Take Back the Park campaign a couple of months ago in preparation for the first series of the year against the Phillies. For years now, Phillies' fans have flocked to Nats Park for games where the Nationals play the Phillies, often times outnumbering the amount of home team fans. 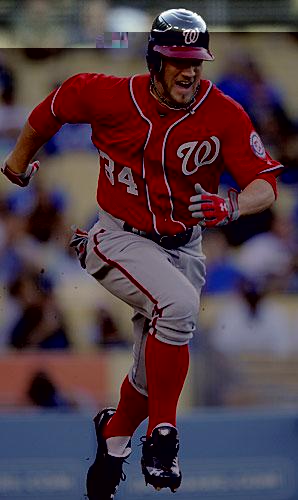 Photo: Harper has already made a name for himself with his hard work and competitive attitude.

Photo: Harper has already made a name for himself with his hard work and competitive attitude.

Meanwhile, all season long, the Nats have been running the Natitude campaign, hoping to draw fans and ignite a fire under the team. But now, more than a marketing campaign, Natitude is being symbolized by Bryce Harper and his relentless energy.

The youngest player in Major League Baseball (MLB) and only 10 days into his major league career, 19 year old Bryce Harper has already made a name for himself as a top hitting prospect, as well as a dangerous player in all facets of the game with non-stop hustle and a big-time attitude.

From the start, it was apparent that Harper is no normal player. In his MLB debut, he got his first major league hit on a double off the wall. When burning around first base, he tipped off his helmet to show off his "fohawk."

Since that first hit, Harper has thrown two bullets to home plate for what should have been two outfield assists had it not been for a dropped ball by Nats catcher Wilson Ramos and a blown call by the umpire. Harper has made catches crashing into the wall, tumbling barehanded and diving. Meanwhile, he has also hit four more doubles, walked five times, been intentionally hit by a pitch and has stolen home.

But of everything that has happened so far, Bryce Harper is best characterized by a somewhat meaningless play in the eighth inning of Sunday night's game against the Phillies. Harper got jammed on an inside pitch and lifted it just over the head of the retreating shortstop. Harper bolted out of the box, rounded first base and slid headfirst into second base, stretching a bloop single into a double. Although the next hitter grounded out to end the inning, everything Bryce Harper brings to the table was showcased right there.

Harper is a freak athlete with a brain for baseball and a competitive attitude present on every play. His Natitude may be just what the Nationals need.