Having a ball at RFK

Nats' games are sure to attract more than just baseball lovers

It's summer time and the baseball spirit is back in D.C. Sports fans all over the metropolitan area have wasted no time in buying season tickets, stocking up on Nationals' paraphernalia or tuning in to Z104 on game days. But if the brouhaha hasn't yet attracted the less-enthused Washingtonians, it won't be long before newcomers join the Nationals' fan base. Playing at R.F.K. stadium just a half hour drive or a convenient Metro ride away from Silver Spring, the Nats offer games full of excitement, drama and cheers all around.

The Saturday, July 23 Nationals victory over the Houston Astros was one such amazing night at the ballpark. The fans were a diverse group: families, young people, dating couples, business friends. Numbering almost 43,000, the fans streamed into the old stadium. Inside the building, venders along the concrete walkways sold pizza, nachos, hot dogs and ice cream. It certainly looked and smelled like a baseball game that night. 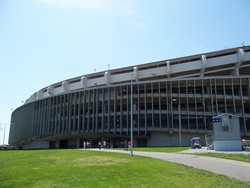 Photo: Fans begin to enter RFK Stadium for the Nationals' April 17th game with the Diamondbacks.

Photo: Fans begin to enter RFK Stadium for the Nationals' April 17th game with the Diamondbacks.

Third at bat, right fielder Jose Guillen heated up the game with his hit in the first inning. After giving up a walk to the next batter, center fielder Preston Wilson, the Houston pitcher loaded the bases. The R.F.K. scoreboard flashed "Make Noise!" The loud speakers chorused "DAY-O!" while the fans echoed the shout in response. The tension mounted as the next batter, third baseman Carlos Baerga, hit a double. Nats fans sprang up all over the stadium screaming as one, two and then three Nationals slid into home plate. The crowd continued cheering in ecstasy as the screens flashed, "Big hit!"

Everyone watched as catcher Brian Schneider stepped up to the plate. His bat cracked, the stadium roared and Schneider reached second base, sending Baerga home. The fans were in an uproar as Baerga slid home for the fourth run of the inning. The high energy level continued when Astros manager Phil Garner argued with the home plate umpire about his call on Baerga's slide into home. Boos directed at Garner filled the stadium and he eventually walked back to the dugout. After a quick hit and a third out, the inning swiftly ended with no shortage of thrills.

The enthusiasm continued for the rest of the game. Foul balls hit into the stands incited crowds of people eager to catch them to leap out of their seats, and video scoreboard cameras scanned the crowd drawing cheers and funky dance moves from the fans. Peanuts and ice cream residue littered the rows, and fans pleasantly conversed. A man explained to his wife the concept of stealing. "Look he got the guy!" he cried as the Astros pitcher foiled a runner's attempt to steal second. The three screens in the stadium continued to show messages of encouragement such as "Get loud!" and "Make Noise!" To fill in the dull moments, corporate America offered fun little games like the Budweiser animated race shown on screen and the t-shirt giveaway. Then, during the seventh inning stretch, fans joined "Screech," the Nats' bald eagle mascot, in a rendition of "Take Me Out to the Ballgame."

The score remained 4-0 at the top of the 6th with Nats fans in high spirits. Even when the Astros' Lance Berkman hit a homerun, bringing in two runs, the euphoric mood continued. In the middle of the sixth inning, "Sweet Sixth" flashed on the screens and a chorus of fans joined in singing "Sweet Caroline" as it played throughout the stadium. At the top of the 8th, an Astros base runner was called out on first, prompting manager Phil Garner back on the field for the third time. For several minutes, Garner argued heatedly with the first base umpire, his arms flailing in the air. Boos again echoed throughout the stadium and for a moment the scene looked like a staged "Real World" dispute. Finally the ump ejected Garner from the game and he walked off in disgust.

Slowly the game wound down as the Nats brought in their ace closer Chad Cordero at the top of the 9th. Eager to seal the win, the crowd cheered on "The Chief" at every strike and booed on every hit. With two outs, the last batter's flied out to the Nats' center fielder and the game ended. A couple rounds of fireworks shot out from the edge of the stadium as fans began to leave, satisfied with the 4-2 victory.