Heating issues cause problems in the winter months

Many classrooms in Blair, and other schools in Montgomery County, have reached extremely hot or cold temperatures in winter months due to faulty heating, ventilation and air-conditioning (HVAC) systems. This creates an uncomfortable learning environment for both teachers and students. While Montgomery County Public Schools (MCPS) maintenance staff are working to fix broken heating sensors, the Board of Education has not approved funding specifically for HVAC upgrades at every school.

Lola Piper, who teaches Fundamentals of Computer Science at Blair in room 328, found that at times her room has gotten so hot she had to open up all the windows on days when the temperature outside was in the teens. "The past couple days I would say it's been kind of around 69 to 72 degrees, but at its worst it was 88 degrees in here. I came in in the morning and it was already 78 degrees, and I had to open all the windows just to keep it bearable," Piper said.

She found that the extreme temperatures adversely affected her students' ability to focus and made it hard to keep the class engaged. "With the window open, if the kids were near my window it was okay, but if they were farther away they were falling asleep because it was too hot. When the open windows made it too cold, they couldn't necessarily concentrate either," she said. 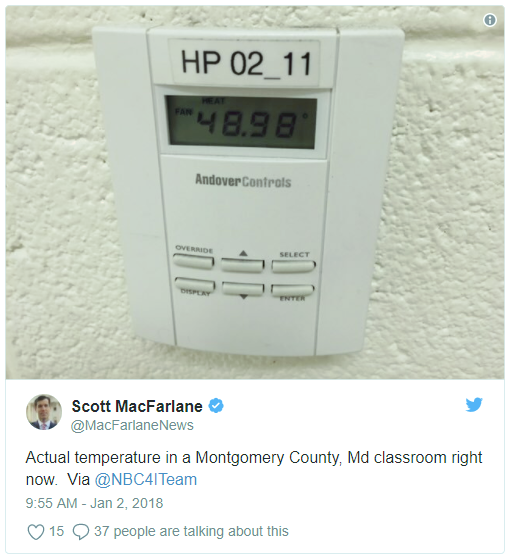 According to longtime Blair Technology and Engineering teacher, John Kaluta, Blair's HVAC has been periodically faulty since the building opened in 1998. "The day the building opened, it was so hot that the panels popped off the walls in the Student Activity Center (SAC) and upstairs. During winter, we found certain places in the building, including one of my rooms that, as soon as the heat was turned off, blistering cold air would come in through the vents," Kaluta explained.

HVAC systems in MCPS are long overdue for an upgrade. According to Energy Star, a government initiative for energy-efficient products, air conditioners should be replaced every ten years and boilers every fifteen years. Blair's HVAC system, installed in 1998, is nearly twenty years old. At this time, MCPS has not allocated funding to upgrade HVAC systems in schools.

Blair is not the only school in Montgomery County to have experienced these HVAC issues. On Jan. 2, an NBC4 reporter tweeted a photo of a thermostat outside a classroom at Richard Montgomery High School. The temperature was only 48.98 degrees.

The issue of improper heating in classrooms caught the Maryland Governor, Larry Hogan's, attention on Jan. 3, when the Baltimore Teachers Union requested that schools in the city be closed. Freezing temperatures in classrooms caused pipe and water issues and bursting boilers in some schools.

On Jan. 8, Governor Hogan announced his intention to create the office of Education Inspector General in response to these HVAC issues specifically pertaining to Baltimore schools. Despite awarding Baltimore City $2.5 million in emergency aid, he claimed that the pervasive issues with HVAC are not an issue of funds. "It's an accountability and management and competency issue," he said in his statement.

Hogan has not yet addressed HVAC problems in Montgomery County. Instead, the burden falls entirely on MCPS. According to an article in Bethesda Magazine, MCPS maintenance crews are "checking boilers and temperature sensors at school buildings to make sure they're working properly."