"In every city, there are fools to pity."

With the sunrise to his back, Mr.T energetically, and with grim determination, jogs towards what looks like a gloomy, dark building. With no guns or even Sylvester Stallone in sight, this cannot possibly be another "A-Team" or "Rocky" re-run. Instead, Mr.T appears before the camera, growling, " Don't be a fool! Watch my show!" Accompanied by theme music, complete with church choir-like backup singers, what begins is an epic journey into the mind and world that surrounds the cultural phenomenon that is T. "I Pity the Fool", Mr.T's new reality show, promises to "lay down knowledge" T-style and help the "fools," an ambitious quest indeed.

In the 30 minute pilot, Mr.T rushes in to assist with the motivation level at a car dealership that suffers from bad father/son-in-law relations and a dispirited work force. Arriving at first in full T-gear (a red jump suit and his trademark mohawk), he quickly changes into a car salesman suit and gives out his personal sales advice: "Sell unto others as you would have them sell unto you." Along with this divinely inspired mantra, he sets dealership goal of selling 20 cars in 2 days, to the wide-mouth stares of the dealership employees. 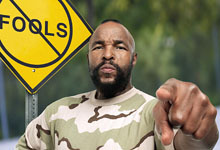 The mayhem that ensues includes trying to lower the price of a car for his first set of customers by "negotiating" with the accountant ("My lunch costs that much! That's chump change, fool!"), jumping into car trunks while trying to make a sale and getting hung up on making advertisement phone calls. After verbally beating on an employee "fool," Mr.T helps the manager and his son make up in a scene more in place in Dr.Phil, complete with light, heart warming music, and extreme T-closeups. A few tears, hugs and T-thank you's later, it's back to dishing out "fuel injected motivation" in the form of inspirational yelling and jumping.

The pilot itself is a corny, over-the-top Franken-child, stitched together from family counseling show parts and typical Mr.T terminology and tantrums. Seeking to better the lives of the many "fools" that he encounters, Mr.T dispenses wisdom left and right ("You can't spell success without T!"), pushing them to improve themselves through T-tried and true methods. The show occasionally drifts into heart to heart moments with Mr.T and the people that he directly affects on the show, but then immediately snaps back to more ridiculous antics and classic Mr.T behavior. What the viewer is left with is a series of Mr.T punchlines and the stunned expressions on people's faces as he tries to fix their lives.

The pilot ends with a almost, but not quite, tear-jerking end to Mr.T's stay at the dealership, with many T-inspired phrases and touching commentary by the employees whom he motivated and inspired. Future episodes feature Mr.T rehabilitating a couch potato husband into a functioning family member again, opening the door for even more antics and general ludicrousness on his part.

While overall a complete and utter failure as a serious help show, "I Pity the Fool" is good for a couple of laughs and brushing up on your Mr.T-related jargon.

"I Pity the Fool" airs every Wednesday night at 9:00 on TV Land\