"Heroes" save the day

Whether it is daydreaming about having wings that you can fly with or the power to read minds and lift objects, every Blazer has fantasized about having super powers. This universal desire is the key to the success of NBC's new show "Heroes," which lacks in uniqueness, but makes up with appeal.

The show opens with a handful of seemingly random strangers being pulled together by fate (or maybe scientists, as the show eerily hints), all sharing one thing in common: a recently discovered "superpower." These "powers" range from invulnerability and flight to prophesies and spilt personalities (which is not so much as a "power" as a mental disease). 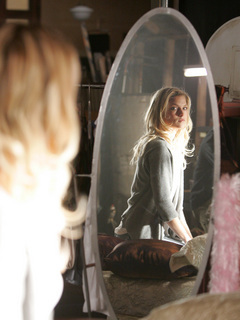 Struggling single mother Niki Sanders (Ali Larter) suspects a shocking secret about herself, though her full power has not yet been discovered. Other characters, like Peter Petrelli (Milo Ventimiglia), the lazy younger brother of a New York political candidate, and Isaac Mendez (Santiago Cabrera), a drug addicted artist whose paintings miraculously predict events, receive more air time and strangely relate to each another. Slowly, all the characters are drawn to New York City where, presumably, they will learn the truth about their powers.

The show's premiere, which attracted 14.3 million viewers, the most for an NBC pilot in five years, struggles to both introduce as many characters as possible while developing a plot at the same time. Too much time is spent on the characters, giving the interesting back-story little credit. In this sense, the show bears similarities to ABC's "Lost," in that during the first episode, several connections between the "Heroes" and the presumed "bad guy" are revealed, a technique distinctly reminiscent of ABC's hit show.

While engaging, "Heroes" falters in setting itself apart from other hero-themed pieces, like, for example, "X-Men." Although there are similarities between both "X-Men" and "Heroes" (several characters even share the same powers), the latter pulls in an international viewpoint by having the so-called heroes scattered all over the globe. A slightly nerdy man discovers he can bend time and space in Tokyo, a man can fly in New York and, in Texas, a cheerleader discovers she is immune to injury.

At first glance, "Heroes" appears to be a show that has been done numerous times before (USA's "The 4400" and WB's "Supernatural"), but the first episode's ending hints at a mysterious cause of the heroes' powers. Whether those powers resulted from genetics experimentation or a greater force has yet to be reveled. The only other unappealing aspect of the show is an awkward narration that ends each episode, giving it the feel of a PBS documentary rather than a primetime drama.

Without a doubt, "Heroes" stands out in comparison to this year's new fall TV shows, which are either hostage dramas ("The Nine," "Vanished" and "Kidnapped"), identically renewed crime shows ("CSI," "Criminal Minds" and "Numbers") or just plain different ("Ugly Betty," "Smith" and "Jericho"). Whether viewers will find the new powers interesting, the twisting plot intriguing or the quirky characters endearing is still uncertain. What they will find is a show with endless possibilities and great potential.